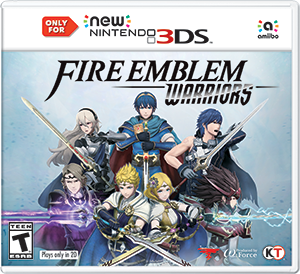 I’m your… Uh… It doesn’t matter who I am! My origin story’s kind of a mess.


What is it about?
Developed by Omega Force and Team Ninja, it is the very first spin-off game for Fire Emblem made as a hack and slash game. Using your favourite characters from the Fire Emblem franchise, you battle your way through each mission and secure your map domination!


Storyline: 4/10
Controlling two new characters Rowan and Lianna, the twins and their friend Prince Darios were enjoying a peaceful sunny day when suddenly monsters attacked your castle and you have to flee! Taking the Fire Emblem with you, you meet new friends who will help you overcome these dreadful obstacles and reclaim back your homeland!

If you are a veteran of Koei Tecmo games, anytime there’s a spin-off games, there is always a similar pattern for the story. Here, the story is no different from any other spin-off games: your home got attacked by an unknown force, you meet new people who thinks you are an enemy, you beat them and they join your ranks, rinse and repeat.

Although the writing is good, I can’t help but disappointed at how simplify and predictable the story is. Since you can complete the game under 10 hours, the story is so short and lackluster that you can just skip all the story and still won’t miss a single thing about it. 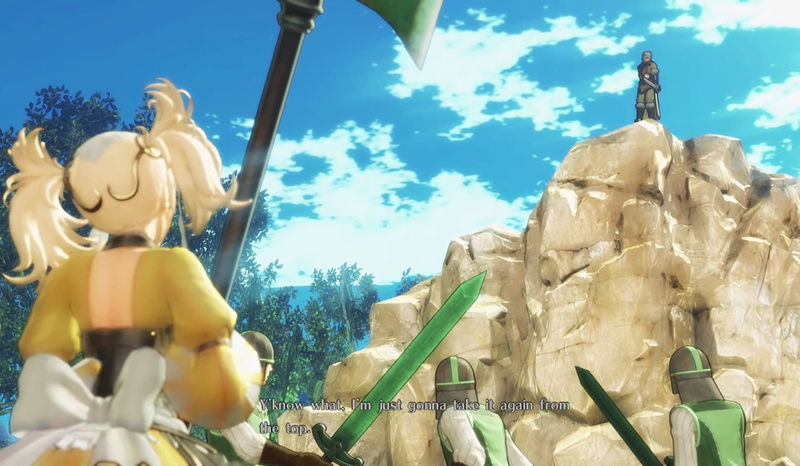 I am pretty sure it wouldn’t take a second to know how the gameplay is going to be like. As obvious as it gets, it is a hack and slash game with little RPG elements that allows you to level up your character levels, learn skills (by using materials gained from completing missions), equip and forge various weapons. But that can’t be all, right?

To start it off, this game consists of two modes: Story mode and History mode. Story mode has a linear progression with its original story. As for History Mode, it is more of a challenge mode a there are restrictions impose for each mission for you to complete. Each mission has a ranking system which depending on the rank, you will be able to gain special weapons or items. This game is so easy that you will easily get S or A for all missions. The only times you will not be able to get a S rank is when you did not kill enough enemies (HINT: Get at least 1200 KOs to secure your S rank). Side Missions pop up from time to time during the Main Mission, but does not affect your overall Rank Score if you failed them. The Side Missions doesn’t really affect the battle situation much if you successfully complete them (except for few, such as activating a Dragon Vein to remove poison), but usually upon success would only reward you recovery item.

Uniquely to this game, this time you will be able to deploy at most four characters on map. During anytime during the mission, you will be able to swap between those characters. All characters come with two standard bars: Warrior Gauge, which is the equivalent of the Musou Attack in other Warriors games ala ultimate attack; and Awakening Bar, which temporarily boost your stats and gives you a great advantage over all enemies. These bars will filled up over time as you slash your enemies or use potions.

In addition to the HP bar, all enemy officers have a special Stun Guage, which upon fully depleted, will allow your character to release a special critical strike move. The Stun Gauge will only appears when you perform a strong attack on the officer, which highly encourages different attacking combo instead of the usual spamming of normal attacks.

Inspired by Fire Emblem Awakening and Fates, the pairing up system makes its way here too. When you approach another friendly officer on the battlefield, you can opt to pair up with them. This way, your partner will sometimes either help you block attacks or break enemy’s guard. When both of your character’s Warriors Gauge filled up, you can perform a dual special attack. However this is only usable if you pair up with a playable character during map deployment, not your ally NPC. It is entirely up to your choice pair up so you will have an extra safety net to protect you, or command them (you can give orders to them on the map) to attack or defend certain locations.

Weapon Triangle are also featured here, in which sword-based characters will do more damage to axe but less to lance, axe will do more damage to lance but less to sword and lastly lance will out-damage sword and deal lesser damage to axe. Truth to the told, although it seems like it will require you to strategize according to the strength and weakness, but in reality this weapon triangle system is pretty pointless. For the entire game, I’ve just stick to a few favourite characters which are all sword users and beaten all officers, despite the big indication showing that I have a weapon disadvantage over them. It further proves my point when I’ve played the Lunatic difficult and still can easily beat officers whom have great weapon advantage over me. As long as you’re not using any flying or mounted playable characters, everything should be an easy breeze. Usually it is not advisable to use flying or mounted characters because they are difficult to control, and if the enemy officer has weapon advantage over you they can usually kill you within three hits (usually the bow-using officers).

Last but not least, support conversations are also available here, but also remained to be a boring and pointless feature except for gaining materials. You work your way from rank C till A+ as your characters work together during a mission. From rank C to rank A, instead of a “conversation” between two characters, the two characters will usually give generic boring responses that doesn’t interact with each other nor contribute anything extra to the story or character development. Even if you did get the support rank to A+, you can just simply skip it as their conversation is just simply words of appreciation towards each other. Just skip it, I’ll assure you that you won’t miss much, unless you are trying to improve your English with it. 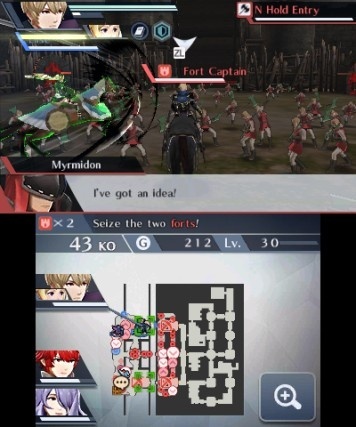 Ever since I was introduced to the Pair Up feature in this game, I am finally able to get a girlfriend by forcefully making her pair up with me! (sadistic laughter) 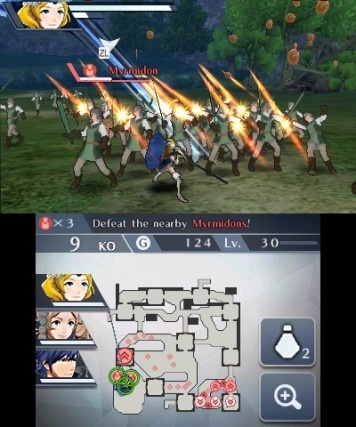 You will need epic awesome music to mark the start of your 1000 people massacre.

Graphics: 6/10
As you would expect from a Warriors game that is released on a handheld console, there is absolutely no doubt that the graphics will be a little choppy (whereas the graphics in the Nintendo Switch looks amazing). Still, visual style and presentation are nicely done and I am actually quite impressed that the gameplay remained smooth throughout the whole game, although there are times that the game will slow down a little (but rarely). However, I would like to complain that I wish all normal grunts have HP bars above their head so I will be able to determine whether I’ve killed them off or not. I guess they removed the HP bars so they can maintain the consistency of the FPS. 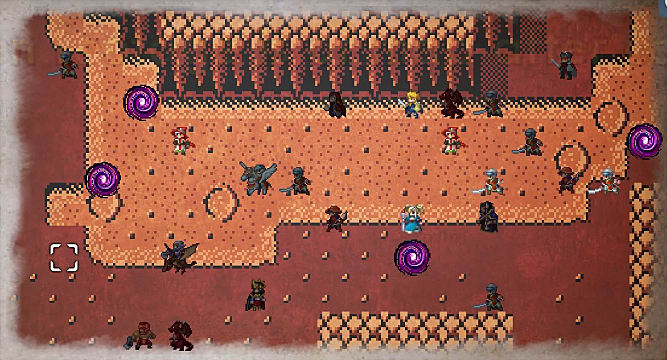 Retro artstyle for the History Mode.

Final Score: 6/10
Fire Emblem Warriors try to make it a special unique game from the rest of the Warriors game, but unfortunately have failed to do so. The Story mode is boring and linear that doesn’t offer any real difficulty. Character selection are very little and side missions offers little to no variety to the map’s battle situation. Since weapon triangle is pretty much a useless feature as you can defeat officer with advantage over you, the gameplay quickly becomes stale and repetitious.

As much as I hate to admit it, I generally enjoyed Hack & Slash games, and just as I was about to finally get into the groove, the game ends after just less than 10 hours of gameplay. You might argue with me that there’s history mode, but the history mode does not provide any story development except for few dialogue exchanges and mainly serves as a challenge mode. Why even bother playing these challenges when the reward is not even that big of a deal?

My final conclusion is, if you’re a hardcore Warriors player, only pick up this game when the price drop. Or just get it to satisfy your current urge as you wait for the next Warriors game to come out. If you’re a Fire Emblem fan and expect to see more story or character development, please be sure there are little to none and you can just simply skip over this game.


Will I replay the game for a second time?
As much as I do enjoy the game eventhough it has a lot of flaws, I would have to make a pass on it. There are simply better Warriors game such as Warriors Orochi 3, Dynasty Warriors 7, Samurai Warriors 1, Dynasty Warriors Gundam 2 and more! Sadly, as a fan of both Warriors games and Fire Emblem, Fire Emblem Warriors is simply just one of those games I would simply beat it once, dump it aside and don’t think about it anymore.

As always, thank you for reading this review and I hope to see you soon in my next post! Goodbye!

@Talesfanatic Both are equally good but I think the features and gimmicks are executed better in Hyrule Warriors. If I have to choose between these two I'll definitely pick Hyrule Warriors because there are some difficulty in it and the boss battles are interesting although it could quickly get annoying too.