Kokopolo is a hyperactive wildcat who was just taking his afternoon nap, listening to his ipod, when all of a sudden a drum fell on his head. It was an accident, however, that doesn’t matter for Kokopolo as he and his buddy Tatsumo who involuntarily joins him on a quest to hunt down the peace loving Jinbe while disturbing the habitat. 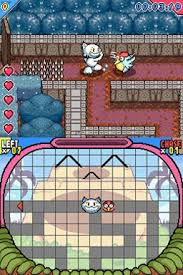 Go! Go! Kokopolo can be describe as a Chase ‘em Up. The goal in each maze-design stages is to purposely be chase by an enemy by scratching it with the A button. As the enemy grows red in fury, it’s time to dash away by holding down the R shoulder button and the enemy will chase after you in the same speed as you do. Using the slide pad to turn corners, holding a direction before the actual turn acts like a GPS. Letting go of the dash button will have you skid and it takes awhile to make a complete stop and controllable again. Fortunately, there is a solution when absentmindedly facing the wall while during the dashing animation and then letting go of the dash button. To defeat the enemy, you must lure it into a Snap Snap Plant and jump over with the B button, the pursuer will do the same and that’s when the pink carnivorous plant strikes. Once eaten, the enemy now appears in the bottom screen as a mechanical reel and tapping it the Snap Snap Plant will release a spore that could either be useful or deadly depending on where the reel stops at and lands on the the location where the enemy once stood. When being chase, it’s optional to have multiple pursuers by pressing the A button when dashing towards unoccupied enemies for immediate stage completion, however, the Snap Snap Plant can only digest up to six enemies. There’s no rush (in completing a stage that is), it’s best to be familiarize with the maze before causing mayhem and the fact that there’s a Time Attack Mode. 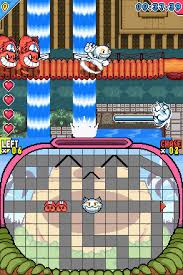 There are two modes for Story Mode. Easy mode is where the speed of the dash is more manageable; unfortunately, it’s a demo compare to Normal mode where it’s fully feature and the adrenaline really kicks into high gear. There are 10 worlds and 8 stages each; in the 8th stage is a boss fight, and a lonely butterfly located in every odd number of stages. Each butterfly contains one scratchcard that features bios and obtaining it by dashing through the white butterfly until the card shows up or while being chase when it involves a red butterfly. Transparent scratchcards means that you have already collected it and collecting them all by playing the entire Story Mode with both Kokopolo and Tatsumo. Catching and adding up to 20 spore-bearing items from previous stages will open up a bonus stage that takes you up to the moon, controlling an astronaut bug with the stylus and collecting treasures while avoiding the black voids. It’s a good investment as when existing the bonus stage automatically completes the level you’re currently in. Some enemies are requiring not to be seen, some you have to shout at or blow on with the microphone, and some that require multiple scratches. Not every maze is free roaming, there are switches to find to open up new areas, some that are mandatory to have multiple pursuers according to the number on a switch, traps that could break a chain of pursuers and reset with the correct path.

There are two types of presentation when playing it on the Nintendo 3DS. In default resolution with the help of the refreshing hand drawn art style, the illusion of seeing the graphics run in actual paper as well as the gameplay presenting as comforting with easier viewing details of the environments. In original “micro” resolution (holding Start and Select buttons simultaneously while loading up the game), the graphics are crisper with little increase of chromaticity and the gameplay presenting the seriousness with more focusing on the enemies’ vigorous fluidity. Both presentations are outstanding to look at in their own defining way. The soundtrack are very catchy; a detour from the real occurrences except during boss battles and the sound effects are very arcadey with the actual indication of what’s really happen on screen. 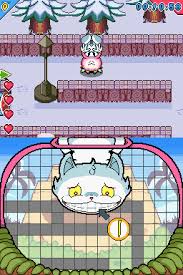 Go! Go! Kokopolo is a DSiware title that probably should be experience on the Nintendo DSi. The Nintendo 3DS shoulder buttons aren’t well suited for continuous pressure and the game includes a bad kind of challenge thanks to the physical punishment for your character and for your right index finger after all the pursuers respawn back to their positions and also lengthy chase sequences in the last few worlds. With that said, the game is very rewarding and easy to come back to. Finding the perfect method to complete each maze with either strategic patience or with sincere courage from the player. Go! Go! Kokopolo is all out reaction and attitude.

Re: Go! Go! Kokopolo (DSiware) review
on September 2nd 2012, 1:25 pmStaroceancrazy
How long is this game?
Permissions in this forum:
You cannot reply to topics in this forum