The new Super Smash Bros for 3DS demo will appear on the eShop any minute now; and some lucky select club Nintendo platinum members received four codes of the demo a week before the eShop demo release. One was for the recipient and three to give away. I was given one of these codes so I have gotten plenty of time to play the demo. Here are my first impressions:

The only mode you can play is a short timed match, but local multiplayer is available. Five characters are available for choosing, Mario, Link, Pikachu, Mega Man, and Villager. You can choose from the classic battlefield stage that includes items, or switch to the final destination version of battlefield with no items (press X on stage selection screen to do this) there’s not much to say about the two stages, as they’re pretty basic

Let me break down the three returning characters. Mario’s moves feel quicker now than in Brawl, and is my hardest of the level 9 opponents to fight. Link is pretty similar now as he was in Brawl, so if your main in Brawl was Link he might remain your main in Smash Bros. for 3DS/Wii U. Pikachu seems somewhat similar from Brawl to Smash for 3DS as well, although I couldn’t tell because I never played Pikachu in Smash 64, Melee, or Brawl. However Pikachu remains one of the harder COMs to face in 1v1 battles. 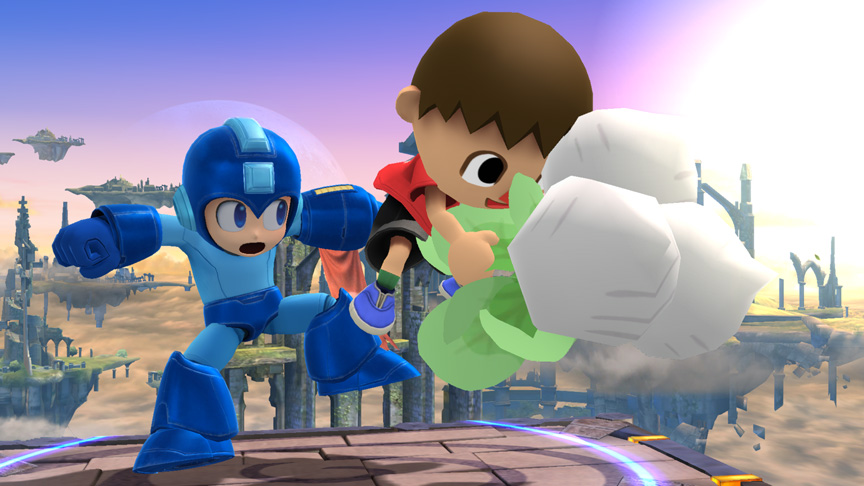 Now the newcomers: Mega Man is a little strange. His moves are mostly ranged, but for most of his moves the range is very short; they’re more like long melee attacks. I couldn’t figure out how to use him well, then again I never gave him much attention. However his final smash is great, especially in smaller stages such as battlefield. Villager is the newcomer I was excited for more than any of the others, and I was ecstatic when I found out he was in the demo. Villager is a little confusing at first, because timing is everything for him. He’s great in ledge battles because his recovery move and his forward smash can get you back to the stage from just about anywhere. I could go into more detail about the characters, but that won’t be necessary because this article is plenty long already.

So you’re probably wondering, how to the controls play out? Well, you’re talking to a guy who played with a Wii remote in Brawl, so maybe I don’t have a popular opinion on controls. I feel the controls are really good once you get used to them. My biggest problem with the gamecube controls was the Y and X jump buttons were a bit far away from the B button, so specials were harder for me to do with jumps. The Y and X buttons on the 3DS are closer, and it’s easier to do that now. However the 3DS controls have a big problem. As you have all probably learned, some gamers’ circle pads have been broken from intense matches. I’m honestly not surprised, but it hasn’t happened to me yet. I’ve never gotten too intense with controls to where any of my handhelds have broken, so if you’re a calm gamer like me it shouldn’t be a problem.

I bet there’s still one question on your mind. “Is Smash for 3DS more like Melee or Brawl?” In short terms, it feels a lot faster than Brawl, but maybe not quite as fast as Melee.

Those are my impressions for the Smash demo. Did this give you some insight on the new Smash? How excited are you for it? Are you picking the 3DS version or Wii U version? Or are you getting both? Leave a comment and join the discussion!
Similar topics
Similar topics
Share this post on:

Re: Super Smash Bros. for 3DS demo first impressions
on September 18th 2014, 12:26 pmTowafan7
The Wii U version needs an exclusive mode to balance things out, otherwise the 3DS version will be vastly superior. Anyways thanks for publishing this superb article @Gamergy!