For those who can't go to E3

Find Mii is one of the two games from the StreetPass Mii Plaza on the Nintendo 3DS. Find Mii is about using Miis that you recruit by StreetPass or Play Coins and they must clear a room by taking down ghosts that are blocking their path. The more rooms clear, the closer your recruits are to rescue your Mii from your birdcage prison and receiving adorable hats along the way. Each Mii has two types of attacks. One of the attacks is with a sword, every Mii has one, and they can attack three times before fleeing like a little wimp. Once they're all gone, you can’t no longer progress and you have to recruit more. If you recruit the same Miis, with your friends who also have a 3DS, those Miis gets a level up. The number of times you Streetpass a same Mii, that same Mii levels up into that same number. However, Lv. 7 is the maximum number, which means that the maximum attack point is 7 hits each. In case you were wondering, the Miis that are at their highest level are still wimps. Fortunately, they do help you progress a lot faster.

If you don’t have friends who own a 3DS, then you mostly have to rely on Lv. 1 Miis. You might get lucky on getting a Lv. 2 Mii by spending your Play Coins. Unfortunately, those Miis takes a long time completing the later rooms and requires dozens upon dozens of Miis to recruit that it becomes tediously overwhelming. There are armored ghost that doesn’t get damage from the Lv. 1 sword wielding Miis and there are rooms that deviously requires a specific color from a Mii in order to progress for example such as a ghost with a shield that can only be destroy from a Mii with the same color. There is no control on choosing the right color Mii when streetpassing a stranger or when using Play Coins the colors are randomly chosen and yet conveniently penalizing on the lonely 3DS owner. I mention before that the Miis have more than one way to attack a foe. That secondary optional attack, use only once before they flee, is with magic and there are different types of magic depending on the color of the Mii. Unfortunately, they’re mostly conditional reliefs and progression is once again relies on sword attacks and hoping that one of the sword swings contains a critical hit. 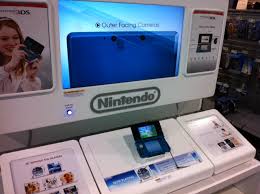 For does who really want to collect all the hats and have less success on Streetpasses, fear not as I will reveal to you the best way to progress Find Mii. The trick is to streetpass a 3DS playable demo unit at your local retail store that has one available. Make sure that the wireless LED is light up on the 3DS demo unit. The demo unit should light up a green Notification once you approach the unit. If you unsure of the streetpass success then tap the Notification icon on the demo unit and see if the latest streetpass timestamp matches the exact time from the upper right corner of the top screen. If an employee didn’t set up a Streetpass Mii Plaza on the demo unit then set it up yourself. The usefulness about streetpassing this stationary 3DS owner is that you can also manually change the color of the Mii from the demo unit by editing the Mii’s favorite color from the Mii Maker. These demo units lifespan may not last long as they get damage and more expose from everyone, I’m using the demo unit that has the Start, Select, and Home Button labels removed and still functional.

You might be wondering about using this trick for Puzzle Swap, the other Streetpass Mii Plaza game, as well. The 3DS demo unit is definitely a perfect nexus hub that collects every puzzle piece, especially with purple pieces, from multiple consumers with their 3DS. Unfortunately, the demo units (at least with the one am using) don't include the latest system update and contains only the first seven puzzle panels. I recommend that you do not try to download the update for the demo unit yourself, an employee might think your hacking the system and you could get in trouble.

Streetpassing with a 3DS demo unit from your local retail store is the best way to progress Find Mii. On the day on the first anniversary of me owning a 3DS, I still haven’t completed Find Mii for the first time. I lost interest in even trying because of constantly recruiting week Miis. Fortunately, thanks to the 3DS demo unit my interest in collecting hats revamp and seeing a familiar Mii immediately taking down a ghost with little effort on a revisit first room is very satisfying. I will never be able to unlocking or even enjoy Find Mii 2 without the 3DS demo unit. What do you think of my methods on progressing Find Mii? Leave your welcoming thoughts at the comment section below.

Re: Personal Gaming: Best way to progress Find Mii
May 27th 2012, 7:31 pmKingreX32
This reminds me of that Wii Play game. But it sounds alot cooler. Nice Write up

It doesn't matter if the wireless is on, it needs to be during the home screen when the system is open.
Permissions in this forum:
You cannot reply to topics in this forum