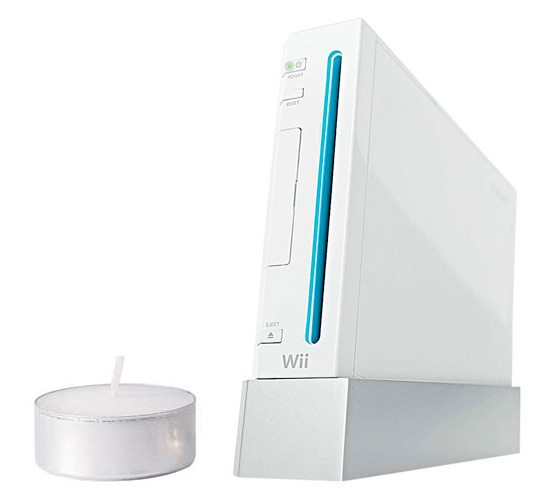 Cairan Davies from Ammanford is recovering in a specialist burns unit

Firefighters who believe an eight-year-old boy was burnt after using candles to make a games console work have issued a safety warning.

Cairan Davies of Ammanford, Carmarthenshire, is recovering in a specialist burns unit after he sustained 8% burns to his chest.

Mid and West Wales Fire Service said it believed he was playing on the console when the incident occured.

However Cairan's family have said it is not clear what happened.

A crew was called to Cairan's family home at 17:10 GMT on Monday.

A spokesman for the service said: "It appears that the boy was upstairs playing on a Wii games' console when the incident occurred.

"I understand that tea lights had been lit to make the console work."

The spokesman added: "This is a very dangerous practice and although they may seem harmless enough, tea lights can pose a serious threat as they can ignite curtains, paper and other combustible materials in the vicinity of the candles."

The boy was taken to Morriston Hospital in Swansea by air ambulance where he is being treated in the Welsh Centre for Burns and Plastic Surgery.

His family said he had undergone a skin graft from his leg to his chest.

In a statement issued by Abertawe Bro Morgannwg University Health Board, Sarah Davies and James Setterfield, Cairan's mother and step-father, said: "The truth is that at the moment no-one knows what happened.

"There has not been an investigation, and Cairan is too upset to speak about the incident. Until he feels able to talk about it, we are unable to find out what happened."

Ms Davies and Mr Setterfield added: "We would like to stress that we do not allow any of our children to play with matches."
They said Cairan was "doing well" but that it would take a while for him to fully recover.

Nintendo, which manufacturers the Wii console, has been asked to comment.

Source
Ya know I always wanted to try that to see if it would actually work. See the Wii sensor bar/Wii Console uses Infared Light to See the Wiimote, people have said that if your Sensor bar is broken you can use two candles to replace it. Despite this article im still gonna try. I know how to handle fire. Anyways Your thoughts?

(Disclaimer: Playing with fire is dangerous And your Shouldn't do it, Unless supervised by a trained professional. If you try this on your own Wiiwarewave is not liable for any damages done. TRY THIS AT YOUR OWN RISK)
____________________________
Nintendo Network ID: KingreX32

Re: Wii candle warning as Ammanford boy burnt
on February 16th 2012, 12:19 amMarth
Yeah, I always thought the candle trick was pretty cool. Still, I'd rather just buy a new sensor bar if the original broke, rather than attempt to use one. I assume this is what the kid was doing, but the article seemed kind of vague. Anyway, hope the kid is alright...