Planet Star Ving has been invaded by the Tabemon pirates ! and stolen the powerful treasures called The Legendary Orbs ! and it's up to The Great Elder's heroes who are the muchables, named Chomper and Munchy, to retrieve the Legendary Orbs and stop the Tabemon monsters' leader's master plan !

Story
The whole story is ok, it's a little weird in a certain part and that's not just because it's fictional or anything like that (more on that later on), but it's lighthearted and has a humoristic tone and flow behind it, and while the story is nothing new, it's kid friendly and it really doesn't take itself too seriously, but when the story is being told whether you start and finish a level, the way it represents felt like lacking interest in it or felt like it could've been represented in a different style, and there are other moments where the game does take itself seriously, and while it feels a little off the mark, it does it well, but as such the story does its job and it's just ok.

Gameplay
The Munchables (also known as Tabemon in Japan) is an action and sometimes platform game, where you can use the Wii remote and Nunchuck, Classic controller and Gamecube controller. The game starts with which character you want to play as (either Chomper, the monster looking one, and Munchy, the dog-ish looking one) in a tutorial that does a great job at explaining the game's controls and then later you get to select a world and then a level, in the game you can only jump, attack and eat, you can lock on as well but to be honest, I didn't use it too much... and each level has one main objective to complete such as eating the leader pirate or to go to an area, the game does have two objective as well and the game has some variety in the levels in them as well so that the whole experience doesn't make the game repetitive, and it does a great  job at doing it. One of the main focuses on the game is to eat the enemies, because you have a level meter that always starts at level 1 every time you're on the first level of the other worlds, and the more you eat, the more you can level up and grow, having the advantage to eat bigger enemies and do an action that requires you to be in a certain level to activate it, all while trying to complete the main objective of the level, and you also have "meal" points, where it counts all of the meals you ate, and when you go on a long streak of eating enemies, you will be rewarded with "combo" points increasing more of your "meal" points. But just because you can eat them easily, that doesn't mean that they can't defend themselves either, some enemies can attack you and once attacked, you will lose some meal points, you will be tiny and the game requires you to rapidly tap the jump button, if you don't do that and you get hit again, it's game over, but this game is actually easy to beat so you might not experience this if you've played a lot of games before.

But as for the bigger enemies that are too big to eat and have a higher level, so you must attack them to burst into smaller lower-leveled enemies allowing you to eat them, some are even bigger to eat and may require you to bash them a few times, but the problem is, your attack is a little slow paced and most of the time you will miss even though you hit them dead on, and not because you have to wait for them to stand up, but because sometimes there will be a lot of enemies in your surroundings that you will barely notice which one is eatable, and not to mention that they can attack too, and because of that, you will get hit and you might never see which one was the one who did it, and that is also because the camera in the game will always be fixed, and you can't control it whatsoever. Another thing to mention is that you will also have a meter in form of a stomach, and it will fill up due to the amount of things you will eat and once it's full, you will evolve into an older munchable... I think it only makes your character slightly faster and slightly bigger, but that's about it. And as I've said before, this game also has some platforming elements in them, but the problem is, your character might be a little slippery when walking, while it doesn't ruin the whole experience, it still feels a little uncomfortable while in these sections because there will be times that you might think that you might mess up. And lastly when you beat the level, you will be graded on your statistics based on how much objects did you eat, and the large amount of object you've ate, the higher the grade will be.

The multiplayer is kind of similar to Super Mario Galaxy, where the first player is playing the game all while the second player shoots the meals that the first player ate at enemies to either split them up or stun them... sadly, that's the only thing this game offers when it comes to mutliplayer.

The game is allright, there are some problems I had with the game like the controls (and for that matter, if you don't like flicking the wii remote to jump, you can always play it with the gamecube controller and the classic controller) are sometimes uncomfortable and some annoying aspects of the game, and not to mention that the game can be short to some people, but thankfully the game isn't that bad to call it bad or mediocre.

Graphics
The game is colorful and bright which makes this game look nice, in the technical side of things, it kind of looks a little aged, but it looks just right. There are some questionable character designs though, but most of them look cute and kid friendly and others look clever so there are a variety of designs in the game.

The sounds, most of them, actually consists of old animated cartoon sound effects that we all knew and heard, they sound kind of unfitting, but the other sound effects sound really good and fitting unlike the other sound effects, but as for the whole, they sound ok, as for the voice acting... there's cutscenes that actually have the voice acting in them and they sound like something out of a kid's show, and they don't sound that bad but I can see some people disliking it, but when you're playing the game, there isn't any, there's only mumbles and that's it, it's just text only, and lastly the game does support other languages as well depending on what language you speak.

Presentation
The whole game looks like it can be a game for everyone to play, mostly for the younger crowd, all thanks to the colorful and cheery tone of the game, and also for it's easy to play formula, but keep in mind though that this game can be appealed to anybody... however, even though this game looks kid friendly and has some content that is kid friendly, there are some things in the game that’s kind of unfitting, like for example when you are being graded, the meals will turn as orbs and they will count as your grade... but the way they do so is that the munchable character that you are playing as LITERALLY poops these orbs ! I know they don't look that disturbing, but it still munchable poo ! (and not to mention that they all land on the Great Elder... always...) but these questionable moments don't really affect the entire kid friendly nature and tone of the game, so this game isn't THAT weird.

And the game has some other content as well, such as a hub menu which is the Great Elder's house where you can access it by pressing the cancel button and in the hub menu there's a tabemon encyclopedia where it archives the monsters that you've ate, a dresser where you can dress up your munchable with some accessory and even choose another character, a list of all the grades you have in all of the levels, a music menu and a movie menu.

The game also includes a character decal inside the box as well, but sadly, I don't have it so I don't know what it looks like.

As for the replayability, there is some stuff to do, there are some acorns placed or hidden in the game and if you collect them all in one level, you will get a new accessory, and if you beat the game you can unlock a new character named Robo who is faster than the other muchables, a mode called the "Mirror Mode" where all of the levels are mirrored, but not only that, but it is also a time attack mode, where you must beat the level in the fastest way possible, and you will be graded in the amount of time you have left instead of the amount of food like in the original mode, and finally you will have an update or will include your radar where it will have the ability to locate for any missing acorns you've missed, and completing the tabemon encyclopedia and achieving an S rank to all the levels will get you each an accessory.

Overall
This game is allright, but there are some moments that make this game uncomfortable to play, be it the controls and some unfitting aspects of the game, but it's not that bad either and I did had some fun with it, so if you like the concept of this game and sounds appealing to you, then go ahead and get it, but if you're not sure and you might think that the flaws I've mentioned might affect to your enjoyment of this game, then give this a rent if possible, but if you don't like easy games, short games or kid friendly stuff in your games, then skip it, as for me this game gets... 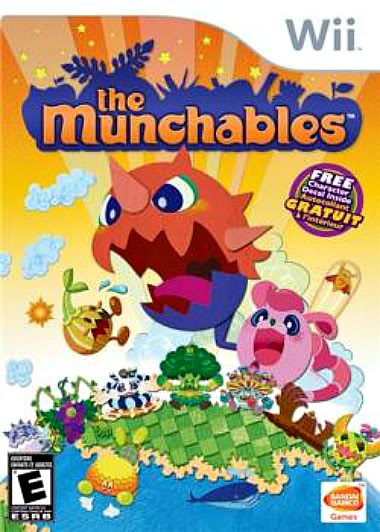 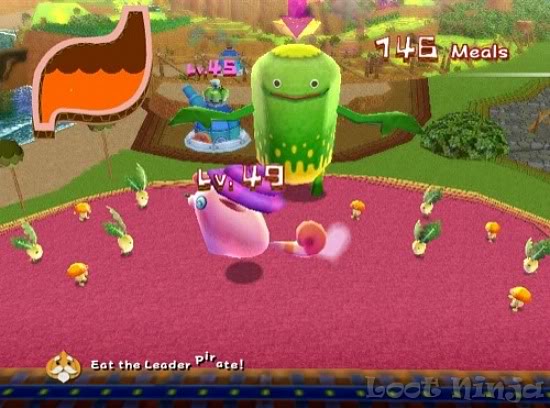 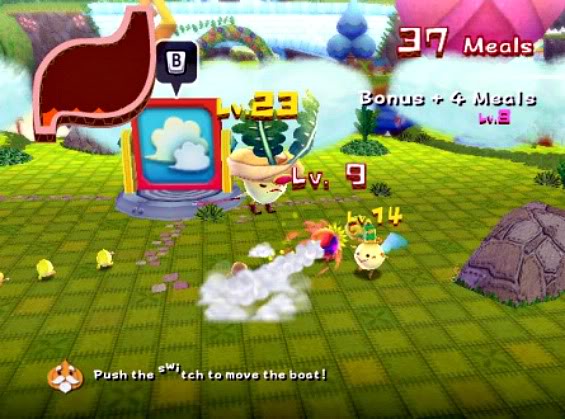 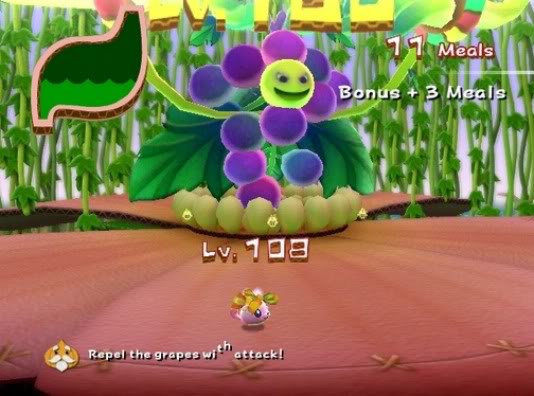 Re: Review: The Munchables (Wii Retail)
December 12th 2011, 2:53 pmGrumblevolcano
This sounds weird to me

I'll second that, and I think Elebits was as weird as I can tolerate.

Re: Review: The Munchables (Wii Retail)
December 12th 2011, 8:34 pmSKTTR
good review. will pick it up when finding it cheap.

Re: Review: The Munchables (Wii Retail)
December 13th 2011, 4:07 pmJnes5
OK, I just want to clarify that the game is not THAT weird, there are a few questionable moments but all of them don't affect the kid friendly nature and tone of the game.

Just wanted to mention that if people got the wrong idea...