Metroid Other M is the latest game in the Metroid Series. It was developed by Project M and Published by Nintendo. It was released on August 31st 2010. 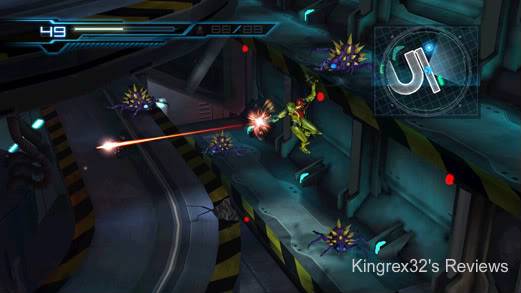 Metroid Other m takes place in between Super Metroid and Metroid fusion. As Always you play as Samus Aran as she investigates a derelict space station called the bottle ship. She is joined by her former commanding officer Adam Malkovich and a platoon of Galactic federation Marines. 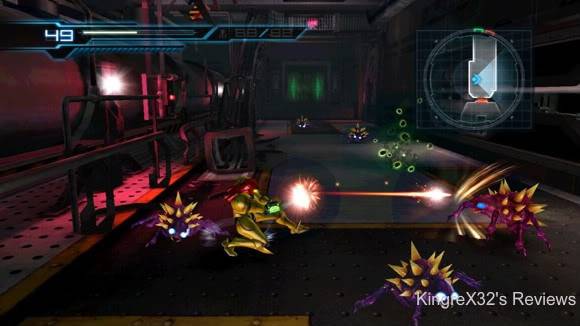 Returning to the style of previous Metroid titles (before the prime series) Other m is a 2D/3D side scrolling platformer, at any point during gameplay players can shift the view from 2D to first person by simply pointing the Wiimote at the screen, while in first person mode you cannot move and it is the only mode where you can use your missiles. Unfortunately most boss fights require you to use your missiles so timing is everything, stay in first person mode a second too long and you may find yourself dead on the floor. Lucky for you because the game is supposed to be reminiscent of earlier Metroid games most of the gameplay is in the 2D (or Side Scrolling) perspective. Even though the game is part side scroller the environments are all 3 dimensional, basically what I’m getting at here is that you have no control over the camera so most of the times (especially if your doubling back) you will be shooting at enemies off-screen. To remedy this Other M has an automatic Lock on System, so Samus will always target the closest enemy. Notice I said closest not target the enemy who’s a bigger threat. 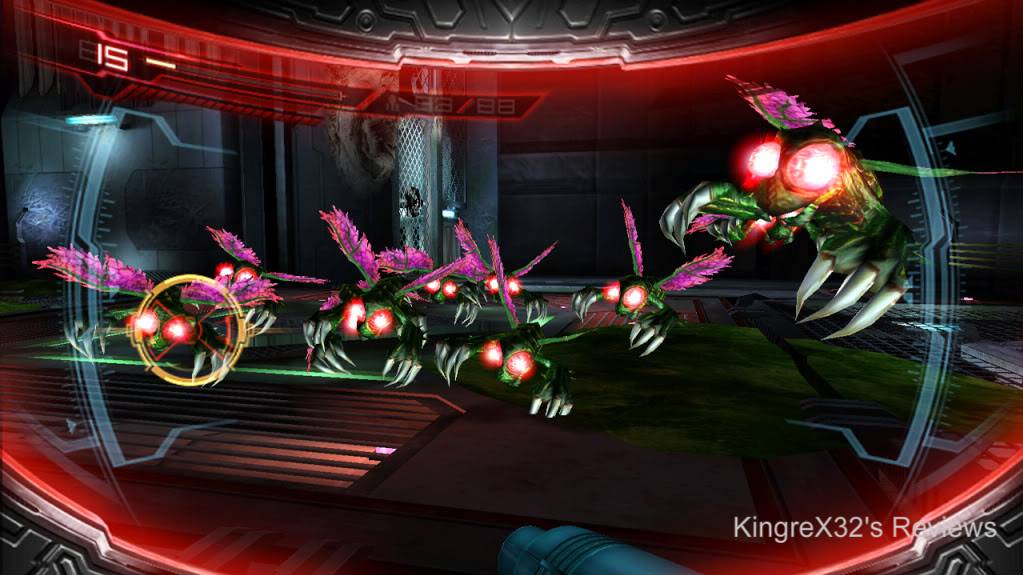 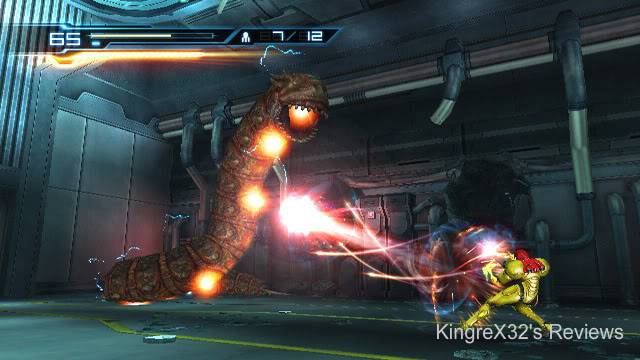 Other m also adds a few new gameplay elements to the series; this is the first game that features melee combat like counter attacks and brutal finishers. The finishers are usually used for Boss Fights, the counter attacks on smaller enemies. These moves include charged blasts at close range (TO THE HEAD), a missile down the throat, kick’s to the face or throwing grunts against walls. Another new gameplay element is the “Concentration” mechanic. When Samus is low on missiles or health she can replenish them (with out the need to save at a save station) on the spot by holding the Wiimote horizontally and pushing A. While this sound like it makes the game easy to play its actually isn’t as unlike the Prime Series defeated enemies do not drop extra ammunition or health. So unless you’re in a boss fight sometimes its better to just run away than stay and fight. 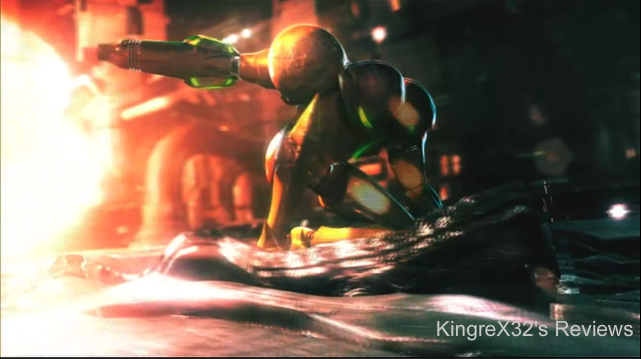 In the graphics department the game looks………very nice. In my opinion its not as good looking as the prime series of games and I feel that they could have been a lot better. The cut scenes on the other hand look amazing; I mean PS3 quality amazing, D-Rockets did a fine job on those. The gameplay was very fast-paced and actiony (yes I know that’s not a word). Only when your solving puzzles and waiting for doors to open does the in your face action stop. The Controls like the game are a throwback to early Metroid titles. The game is played by holding the Wiimote sideways (like an NES Controller), while it sounds bad on paper (when I first heard of it I thought it sounded bad) it actually works and well. 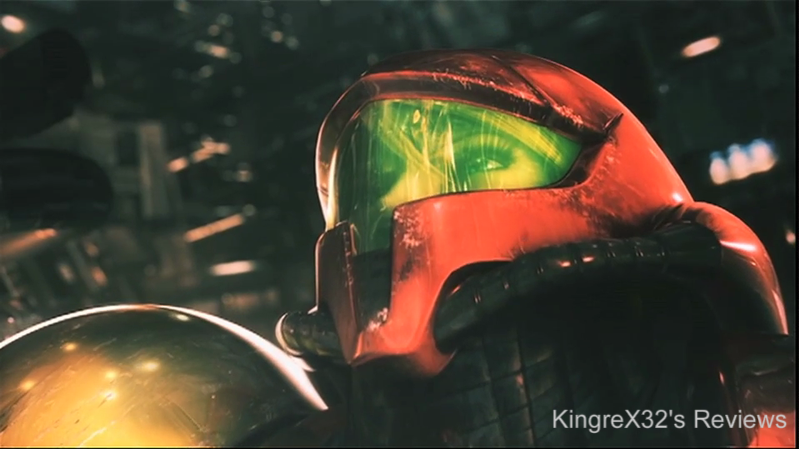 The few problems I had with the game were long load times, the camera could be a pain t=in the rear end at times and some of the cut scenes were really long I’m talking like 8-10 minutes long. These things can be overlooked by the many things the game does right. I loved how the game delved deeper into Samus’s story showing us her past, deep feeling, and days in the Galactic Federation (before she became a bounty hunter). It’s very rare to see an iconic character such as this in this kind of light. I really liked it even though at times it felt like a Science-fiction version of twilight. I also enjoyed the return to the classic Metroid style fans of those older games will feel right at home with this one, I really appreciate the direction team Ninja took with the title. Lastly the voice acting was great, the gameplay fun and the length descent (as always) 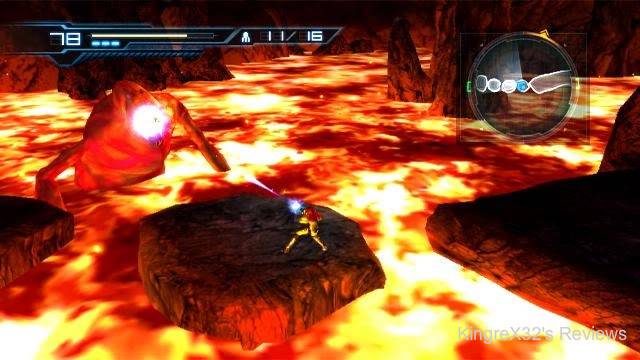 If you haven’t picked up this game already defiantly go out and get it, it’s been out for a while now so the prices are very good. Metroid Other M gets a 9.4 out of 10. 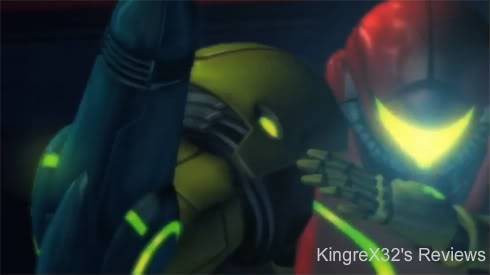 This review can also be read here

Re: Review: Metroid Other M (Wii Retail)
April 2nd 2012, 6:47 pmMarth
Yeah, I picked it up new for $9.99. Metroid games don't normally sell too well in comparison to Nintendo's big hits, but I'm willing to bet this is probably one of the worst selling games in the series yet (at least in North America), hence the price after like a year.

Re: Review: Metroid Other M (Wii Retail)
July 19th 2012, 8:28 amKokorOtaku
Great review this game shoulda sold more, it's sad that this game did better in Japan where Metroid titles don't usually do good

KingreX32 wrote:So am I the only one here you paid 67 bucks for this game?

I got it launch day but Futureshop had a deal where I could trade in Mario Super Sluggers and some other B title I forgot which - for Metroid: Other M for free.

Re: Review: Metroid Other M (Wii Retail)
July 19th 2012, 11:53 amTowafan7
My cousin Ringofungal got this game for $49.99 at launch, but I did hear that the game was selling for much more at many stores.
Similar topics
Similar topics
Permissions in this forum:
You cannot reply to topics in this forum