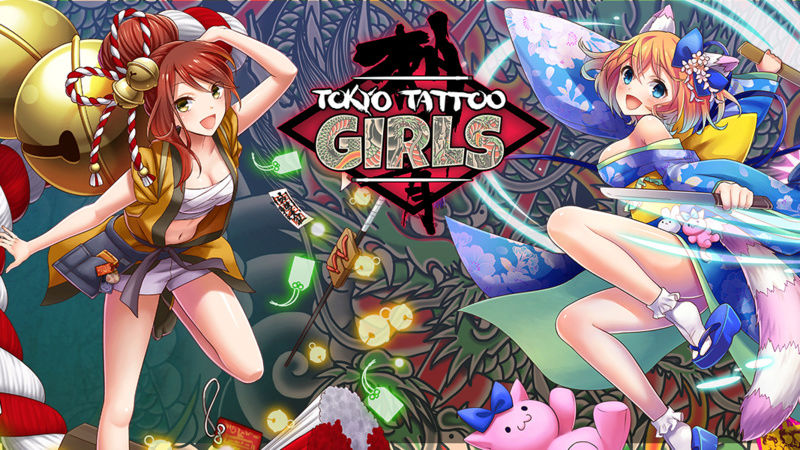 A Japanese maiden… Tea, flowers, the path to mastery..


What is it about?
After a calamity has befall on Tokyo, it divided the city into 23 wards, each controlled by a Clan Boss whom have been granted powerful abilities through tattoos. Isolated and trapped inside Tokyo, you, as the tattoo master, and your partner are trying to conquer and unite all 23-wards so everyone can escape from Tokyo.


Storyline: 2/10
Let’s talk about the story. If you just read my synopsis in the previous paragraph, that is pretty much the entire story of the game. The story was mentioned during the opening cutscene after you select your character, and then nothing else will be happen. No story development, no plot, no explanation about the tattoo powers and not even a background story about the character that you have to choose to partner with. You do have dialogues with the clan boss, but the conversation between them are so terrible and cringey that you can’t help but facepalmed yourself. After a few hours in, I got so fed up with the dialogue I’ve pretty much just skipped it and continue on with the gameplay. 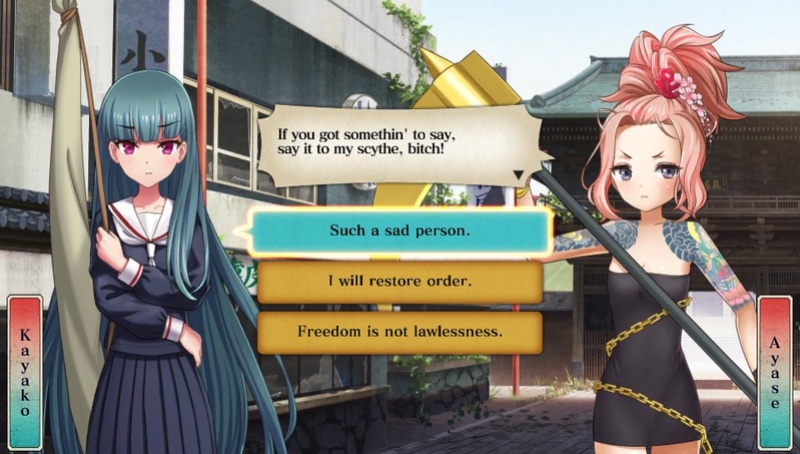 I choose “Such a sad person” and got a bad rating for it. (⌯˃̶᷄ ﹏ ˂̶᷄⌯)

Gameplay: 4/10
When you start the game, you will be given a choice to choose between 6 characters, each with different abilities. After choosing your difficulty (there are 4 levels of difficulty), you will have the option to choose whether to view the tutorial or not. Let’s be frank here, when I first go through the tutorial, I thought I understood all the things that I need to play the game but when I get to the main game, I honestly have no idea what I’m doing or what I’m supposed to do. Tutorial is short and simple that doesn’t really explain much, making your first game both confusing and lost. 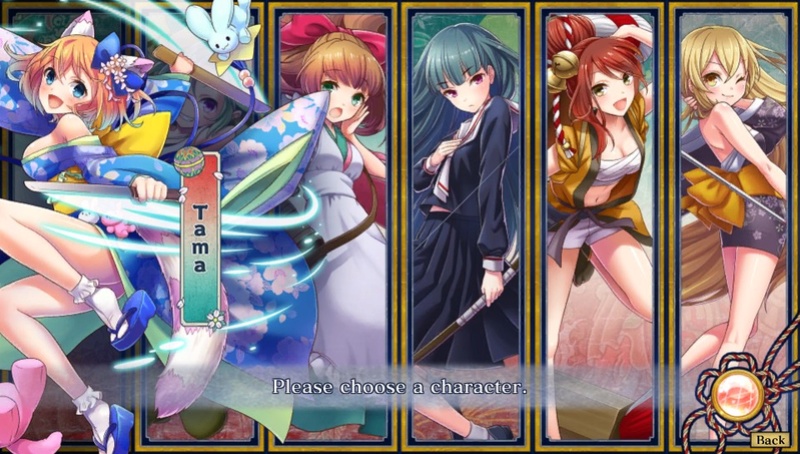 So what is the main goal of the game? Your mission is to conquer all 23 wards while retaining your honor meter. If your honor meter fully depletes before you could conquer all 23 wards, you will immediately get a game over. You first have the option to choose whichever ward as your starting point and once that’s all and done…I guess you don’t have to do anything anymore? Invading and conquering is done automatically and you can’t choose when or what to invade. You do get access to your chosen maiden’s abilities such as recruit more members, reduce alert and so on by using a currency called PM (or Protection Money for short). You gain PM automatically as each day passed by, or you can earn more by clicking on a suitcase that appears on the map from time to time. You can also earn additional money by gambling should the Gambling Den show up in the map. You also get to spend PM to improve your influence by tattooing your girl. There are two stats that the tattoo will heavily influence, which is Charisma (which attracts punks to join your rank) and Threat (attracts your enemies to join you). 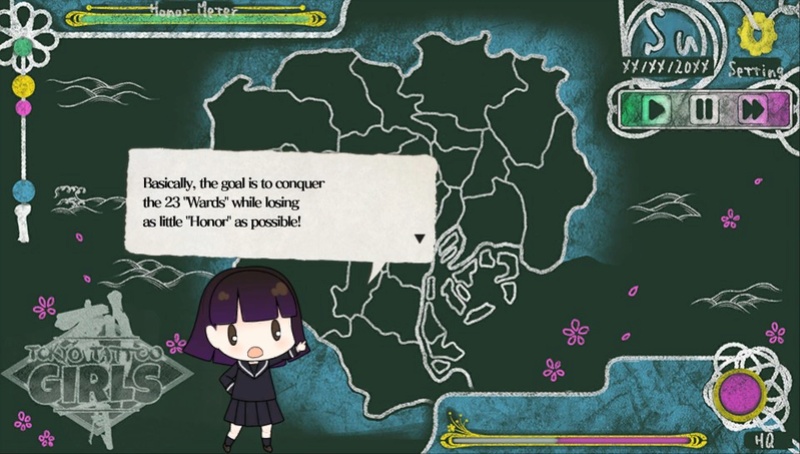 The tutorial is not so informative that you seriously have no idea what the heck is going on for your first game. 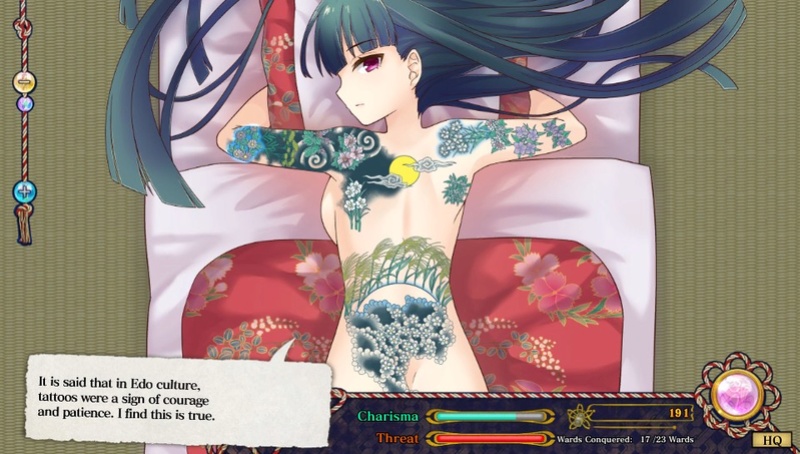 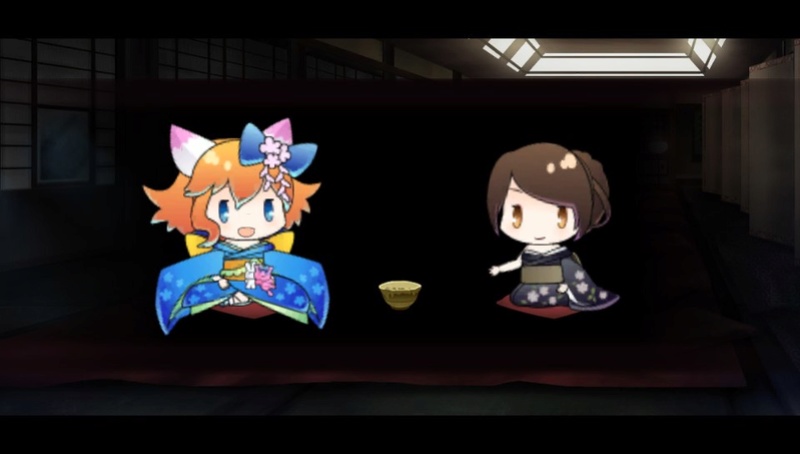 Nothing special about gambling. There’s no mini-game. You literally just choose to gamble or pass and you’ll watch this cute mini cutscene. You have three tries to gamble your PM.

In each ward there are 3 different stats that you must pay attention to: Disciple (your own army), Punks (neutral AI) and Clanswomen (your enemies). Each area will sometimes turn red, which means that your enemies are on high-alert and there’s a possibility of your honor meter reduced. Usually in this situation you will just simply spend PM to reduce the alert but unfortunately all partner’s skills have cooldown so you can’t use it immediately after issuing a command.

If you want to conquer a ward, you will have to deplete the ward’s Punks and Clanswomen to 0 and it will initiate a Clan War with the boss of the area. You initiate a dialogue with the Clan Boss and during midway you will have three choices to select which will determine the results of the war. Let’s be frank here. No matter which choice you select, you still win. The only difference is, the results will determine how much honor meter you will be recovered, either 0%, 3% or 4%. Lastly, if you beat the campaign you will unlock an item which will grant certain stats to your character. 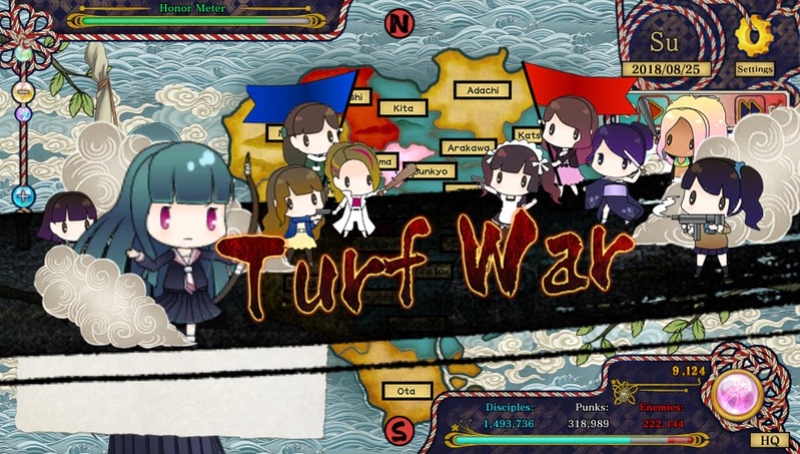 As cute as it seems, you actually don’t get to participate in any mini-games or puzzles or whatever. 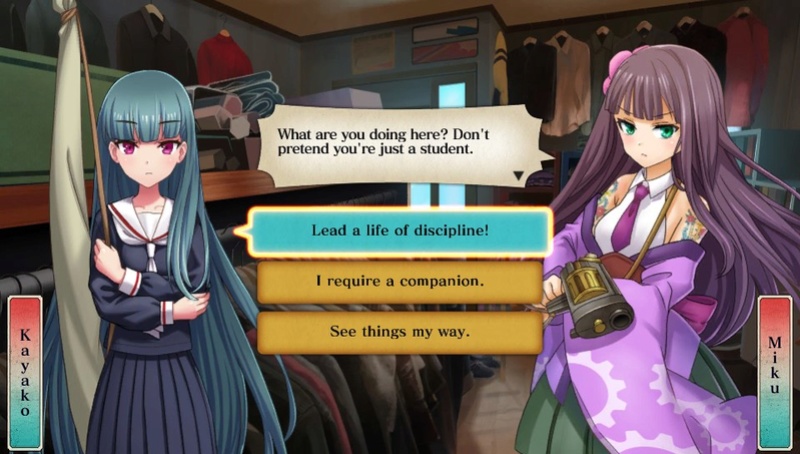 No matter which one you choose, it’s an instant-win for you to earn your free area. Freebies for me!

As much as I would like to talk more about the gameplay features of the game, there are nothing else left to talk about. The gameplay is so minimal that it actually didn’t require you to input too much commands. Surprisingly, despite its simplistic gameplay, each campaign will last around 2 hours. However, the game lags sometimes that makes it slightly unbearable, and there are long loading times too. Coupled it up with bugs and glitches and you will have a very frustrating experience with the game. The terrible tutorial have left me scratching my head throughout the game that it had to take me 3 tries on the campaign to finally understand how the game works. I wouldn’t say the game is entirely boring, but certainly not enjoyable enough to garner people’s interest. The game would probably have been better if there’s mini-game implemented for the Turf War or Clan Boss battle but nope, nothing. Just a small (uninteresting) scene to show off the battle which will only gradually disappoint you the more you play the game. I eventually couldn’t stand it anymore after playing the game for 8 hours and got an S achievement for my campaign. 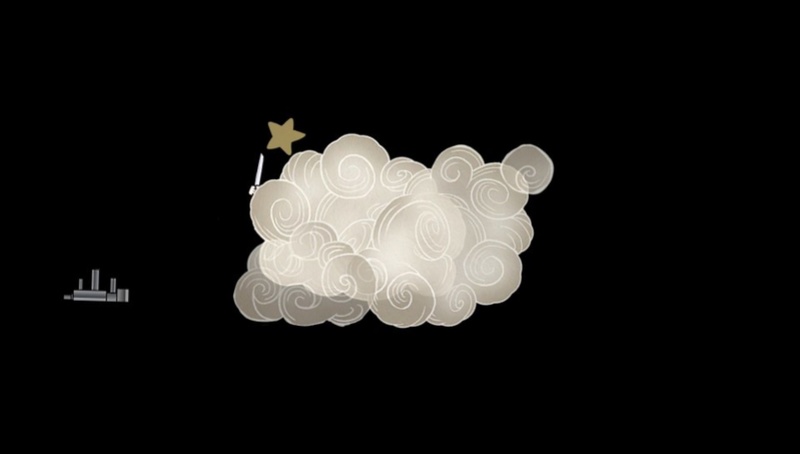 This is literally all the battle scene between your girl and all the clan bosses. Do not expect anything else. 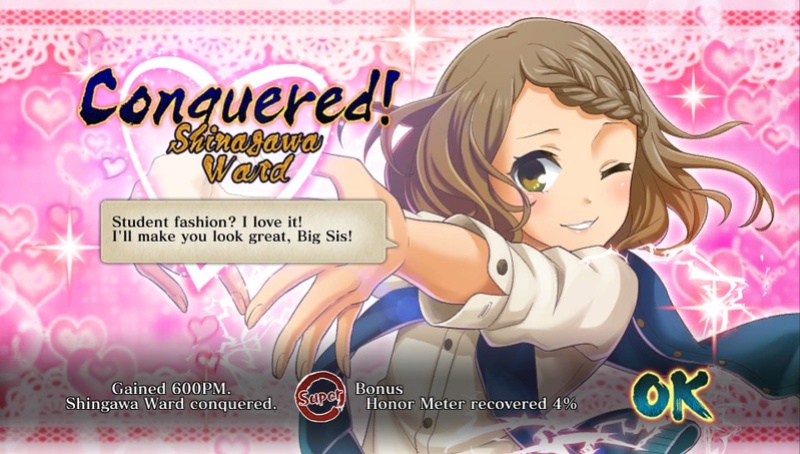 When you successfully conquer (c’mon, there’s no way you’ll failed), depending on dialogue choices you get to recover a little of your Honor Meter and earn some PM. 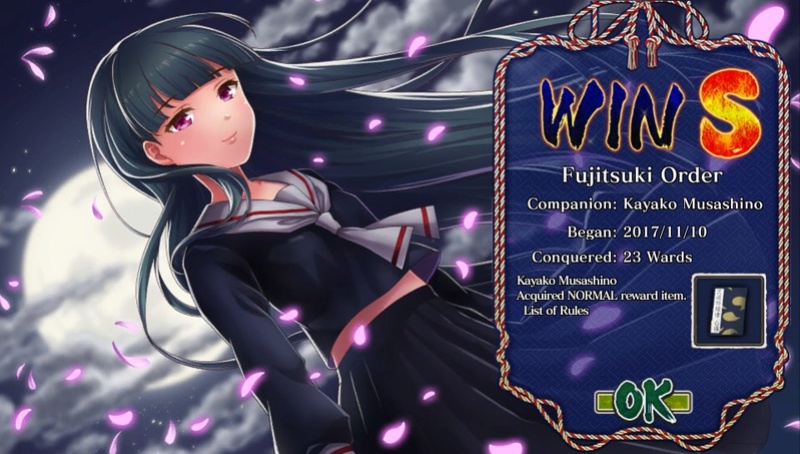 After retrying it three times, I managed to beat a campaign and easily score an S rank. You get an incoherent ending that doesn’t contribute anything or develop the story.

Sound/Music: 6/10
Using traditional Japanese music as the theme for the game, I actually do enjoy the music a lot. However, the reason why the score was low is because for a normal playthrough of the game you will only hear less than 10 different music. Lack of variety for music, you will spend most of your time only listening to the map’s music. 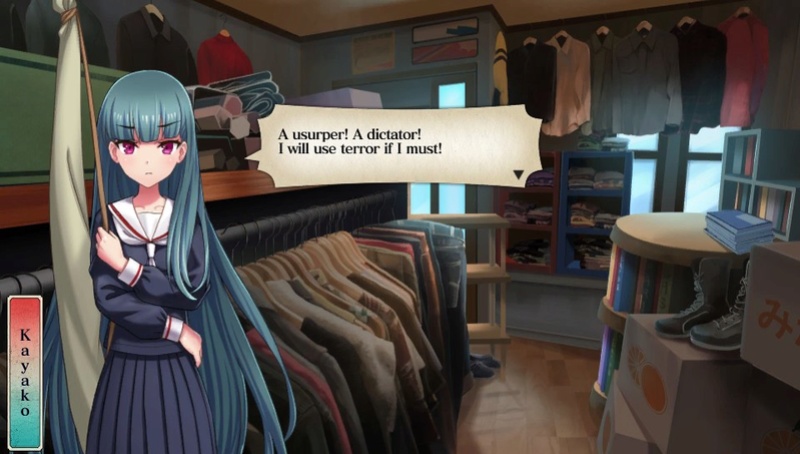 Imagine my face when I have to facepalm for every cringy dialogue that I came across.

Graphics: 7/10
If there is one redeeming feature of this game, I would have to say it’ll be the art-style. The characters are drawn beautifully and creatively. Bright and colourful, you will enjoy the anime art-style very much. There’s a little eye-candy here and there, but nothing sexual or provocative. If you’re a fan of anime, some of the images taken from the game would make a great wallpaper for your desktop. 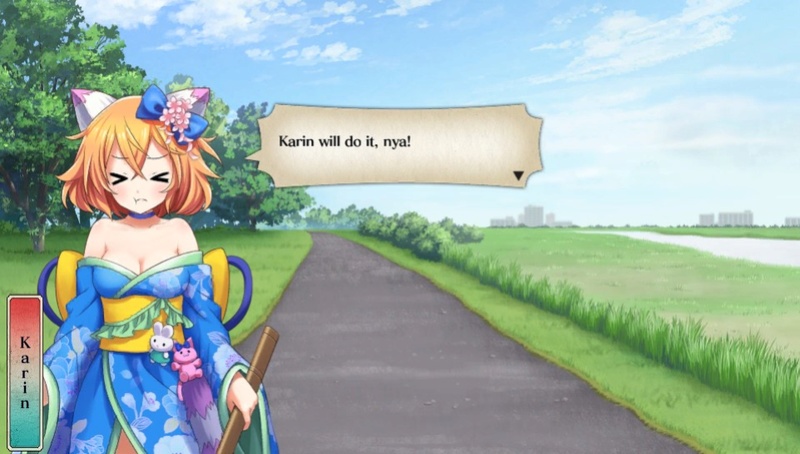 Go, my cat-slave! Obey my commands and conquer Tokyo! Mwahahaha!

Final Score: 5/10
When I saw this final score, I was highly surprised as I’m expecting this game to earn either a 3 or 4. After playing the first hour of the game, I was highly disappointed with the game and can’t help but feel annoyed throughout the game. As pretty as the designs are, I find it irritating when they initiate Clan Boss battle which is a waste of time and long loading time too. There are simply too much loading times in this game! Not to mention that the game is buggy that sometimes out of the blue it will press the X button without your knowledge or it automatically zooms into your map. I might be exaggerating, but I am seriously when I said it took me more than 20 minutes trying to figure out how to zoom out of the map. I check the tutorial, I even went ahead and check the game’s manual and there’s no instructions about it!

If you are a hardcore player who enjoys strategy games, you may enjoy this game.  If not, then don’t think about getting this game. It is simply not worth your frustration and time.


Will I replay the game for a second time?
Try and guess what my answer will be. I’ll give you 2 tries. DING DING DING! BINGO! You’ve guessed it right! I’ve already said what I needed to say about this game and you can probably tell I absolutely did not enjoy my time with this game. I was excited when I heard it is a strategy game, but imagine a large disappointment boulder just fell on me when I played it. I won’t miss this game, and probably will not touch this game again.

Re: Review: Tokyo Tattoo Girls (PC/Vita Retail)
November 13th 2017, 8:13 pmZatchbell
A pass it is then. Good review as expected @ryoutak!

Re: Review: Tokyo Tattoo Girls (PC/Vita Retail)
November 14th 2017, 6:21 pmKain
@ryoutak admittedly I just skimmed through the review because I'm at work. Sorry if you already answered my question above. I will give the review a proper readthrough once I clock out from work in an hour or two.