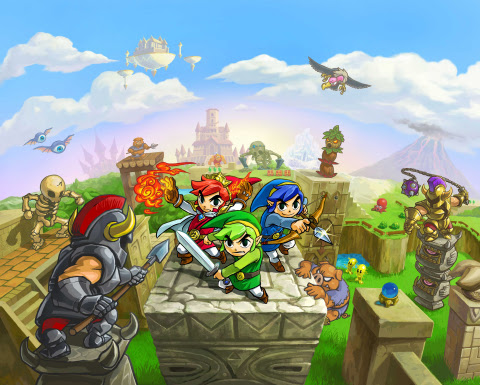 Nintendo of America wrote:Nintendo 3DS owners looking to embark on a legendary adventure will get their chance when The Legend of Zelda: Tri Force Heroes launches for the Nintendo 3DS family of systems on Oct. 23. One of Nintendo’s biggest critical hits at this summer’s E3 video game trade show, The Legend of Zelda: Tri Force Heroes lets up to three players team up locally, via Download Play with one game card or online using a wireless Internet connection to cooperatively explore inventive dungeons and battle bosses.

The Legend of Zelda is one of Nintendo’s most storied and beloved franchises, selling more than 30 million games in the U.S. alone. In The Legend of Zelda: Tri Force Heroes, up to three players play as Link, with each hero selecting a different outfit equipped with a special boost or ability.

One outfit might grant the wearer the ability to shoot arrows, for example, while another could provide more life-saving hearts. A new Totem mechanic allows three Link characters to stack on top of each other to reach higher ground and solve puzzles.

The game can also be played solo, allowing one player to rent two paper dolls to take along to complete the legendary team of three.

Re: Breaking News: Several 3DS Blockbuster Titles Release Dates Are Now Confirmed Plus Triforce Heroes Info Revealed!
+
August 5th 2015, 5:39 pmRena Ryuugu Fanboy
It's really barren imo. Still better than nothing, but in all honesty the Wii U's lineup for the remainder of the year is looking better than the 3DS' lineup.
Reply to topic
Similar topics
Similar topics
Permissions in this forum:
You can reply to topics in this forum