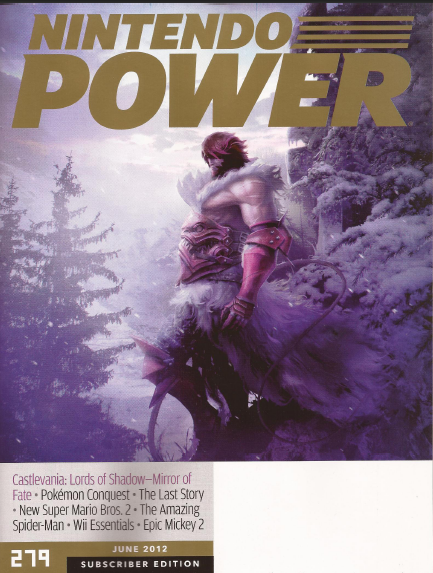 It seems that the previous rumors were true !

Nintendo Power has confirmed that a new Castlevania game for the 3DS has been confirmed, and it is none other than a continuation of Konami's previous Castlevania game, Lords of Shadow, and it's being developed by Mercurysteam ! Producer of the game, Dave Cox, stated:

“We felt that traditionally Castlevania games had done well on handheld, and indeed found a home there to a certain extent. The whole team really felt we could do something special and memorable on the format that would immerse players totally. The N3DS has allowed us to create something totally unique and exclusive to the format that we think players are going to absolutely love.”

There's also a lot of details revealed about the story, the gameplay and more !

- Deep combat mechanics
- Fight with Trevor's version of the Combat Cross
- Strong attacks with X
- Wider-reaching attacks with Y
- Secondary weapons like the boomerang-like glaive and electric bomb
- Use these with A
- Grab enemies with R
- Block and dodge with L
- Involves light and shadow magic returns
- Earn experience points to unlock new combos
- These include launching foes into the air, smashing enemies down to the ground and more
- Includes skeletons, axe-wielding undead and more
- Use the touch screen to leave notes for yourself
- Mark places that you might like to re-visit later
- SpotPass and StreetPass will come into play

- Gameplay is reminiscent of Dawn of Sorrow and Order of Ecclesia
- Polygon-based graphics
- Primarily plays in 2D and 2.5D
- Occasional shift into a fully 3D environment
- Mirror of Fate encourages nonlinear exploration and discovery

- Gameplay stretches across time
- Players will eventually be able to control Trevor’s descendent, Simon Belmont
- There are two other unnamed characters in the game as well
- Switch between the four characters at predetermined points
- Work through Dracula’s castle during different time periods
- Each warrior boasts different abilities
- Explore the same castle with marked differences between each character
- Some paths may be blocked off due to characters not sharing the same abilities (like double jumping)
- Simon wields the Vampire Killer whip
- Trevor utilizes the Combat Cross that made its debut in Lords of Shadow
- Sims can use throwing axes and burning oil
- Simon can also summon mystical guardians to fight for him or protect him

The game sounds interesting ! but what about the Castlevania fans ? are you interested in this game even if you're not a fan ?

And in other related news, Nintendo Power also confirmed that there will be a Castlevania: Lords of Shadow 2 ! However, there is no confirmation on what consoles it is going to be released on, it just stated that:

"(Mirror of Fate has a) climax that will set up the events of Castlevania: Lords of Shadow 2."

And that's it, there was no confirmation on whether or not it will also be developed for the Wii U as well.

This is strange, how would they confirm a sequel if there is no mention on what console is it going to appear, it looks like we will have to wait until E3 if we want to know the answer !

But still, what do you guys and gals think about this massive news relating to Castlevania for the 3DS and a sequel that has no consoles confirmed to being released in ?

Re: Castlevania Lords of Shadow: Mirror of Fate confirmed for 3DS ! + More !
on May 29th 2012, 4:28 pmSkywardL
My interest in the Castlevania franchise has finally return

Super Castlevania 4 was the only one I fully enjoyed

Re: Castlevania Lords of Shadow: Mirror of Fate confirmed for 3DS ! + More !
on June 1st 2012, 2:38 amAussiegamer
I've always been a diehard Castlevania fan so this article has me rather excited! :-D

you and me both

Re: Castlevania Lords of Shadow: Mirror of Fate confirmed for 3DS ! + More !
on March 2nd 2013, 2:12 amNINTENBRO
I just got finished trying out the demo, and this game may be well worth reviewing! If I finish the game in a quick enough fashion, I think I may just do that.

Re: Castlevania Lords of Shadow: Mirror of Fate confirmed for 3DS ! + More !
on March 2nd 2013, 8:08 pmTasuki
I like how they seem to borrow elements from each style of Castlevania game. You have platform action like using the whip to swing from earlier Castlevanias like four, the level design is like a Metroidvania and battle is the style of LoS. Looking to pick up this game Tuesday.