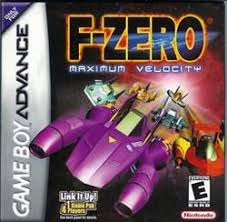 Do you think you have what it takes to be a F-Zero pilot? Surviving in this futuristic racer is only half the battle. F-Zero Maximum Velocity is from a franchise that requiring successful maneuvering and be familiar with your chosen machine. 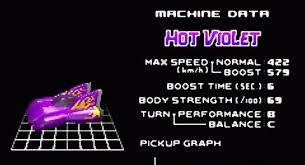 Grand Prix is the main single player campaign where your first step is to select a machine. Each machine has different characteristics besides their body design. Max speed, the duration of boost power, the strength of the machine and turning performance are all very different for each machine and defines your preference. Next is to choose a series, the complexity of the track design can determine by an individual chess piece, of which competing in five tracks with five laps each and lastly choosing a class meaning the difficulty. The goal in Grind Prix is to not only survive but also to finish a race in 3rd place or higher. Training, a Time Attack Mode that dosen’t involve with competing against yourself, only deals with one rival with a selected class on the selected track that already dealt with on the Grand Prix. Championship mode is a specialize track design that doesn’t belong on the Grand Prix. There are Multipak Link and Single-Pak Link modes unfortunately they’re nonfunctional on the Nintendo 3DS.

In this futuristic racer, constantly holding down the accelerator button will not survive your machine for very long on the track. Mastering turns will require holding down the drift button, choosing one of the shoulder button that corresponds to the direction of the turn, while tapping the accelerator button until you’re in the clear. Mastering a u-turn will require to tap on the brake button once and then tapping the accelerator button, remember to never let go of the drift button during a u-turn. When trying to avoid sliding your machine into an electrical edge of the track when hovering over icy paved surface, the key (you guess it) is to tap the accelerator button even when slightly moving the slide pad. These maneuvering techniques work on all four available machines, keep in mind that the amount of tapping depends on the efficiency of a machine. You get access to a boost every time you finish a lap and must know when to use it when pressing both shoulder buttons simultaneously.

The Beginner and Standard classes, the track layouts are the focus protocol. The upcoming turns are crucial but also explosive traps and slow-moving decoys, yellow machines that are there just to spite you, that must be blazing pass-through without harming your machine. There are also Jump Plates that are mandatory for some and must press the slide pad down for a safe landing. Recovery Areas are the most important as they regain the machine’s health and they’re located after the starting line. No worries about your competitors during these classes once your skills perform beautifully on the track without ricocheting. Once the first two classes are no longer written in yellow text it’s time to tackle Expert follow by Master classes. This is where your opponents become much more aggressive by ramming you from behind to make you loose control and lowering your health adding a lot more bombardment. As you make progress, you unlock new machines to add to your collection, however, the problem is that the game fails to mention this so be sure to check through the machine selection thoughtfully. In addition, after calming down from a road rage, successfully conquering one of the series in Master difficulty ends with credits along with the reveal of the victorious driver who is riding the chosen machine. 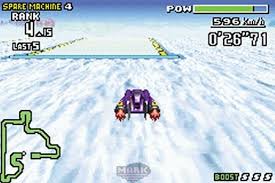 The visuals have the classic mode 7 audacity and the soundtrack with the operatic boldness during races. The visual touches of the exhaust pipes flashing while holding the accelerator button in short duration to get a boost start at the same time as the GO blasting off to the horizon and the camera panning around with the knowledge of you finishing in 1st place are critical enthusiastic moments. The awareness of a single bip indicating that your position has change and the bipping sounds means that it is time to speed up are mechanically adequate for a futuristic racer. 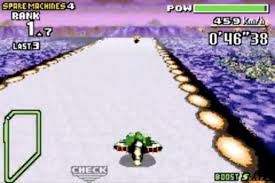 There are some unfairness situations during races like one example being that when your health is down to low power your machine deteriorates and unless you’re on the final stretch it’s best to just give up and try again. Another example is that there are rarity moments when witnessing a rival once currently in 2nd place explode, the unfairness realization is that you’re not automatically be from 3rd to 2nd but instead the game chooses the machine who is 1st now become 2nd. F-Zero Maximum Velocity is an intensely challenging hardcore racing title that really gives you a never-ending sweat thanks to the game achievement of completing Master class for all series with all machines. This experience is not for everyone, not even for Captain Falcon.


Available only for 3DS Ambassadors

Re: F-Zero Maximum Velocity (GBA) review
+
March 28th 2012, 2:55 pmSkywardL
Thanks for the comments and I forgot to mention that not pressing start during the title screen for a minute will display a tutorial with gameplay footage.