Story
Even though the story isn't anything original, the whole story has quite a cheery and charming tone behind it ! it also has some humor as well, while it's not going to make you die-laughing, it does serve it's purpose of it being charm and cheery, the game can also change it's tone a little, but not by much, so overall, the story is so good that you can't help but feel the charming and cheery tone it has it following !

Gameplay
The game plays like an RPG, but it has it's own unique twist that's makes the mario RPGs a one of a kind ! but first things first, the game can take place in a lot of overworlds, some of which are long and some of which are small, and sometimes it can include physical obstacles in your way and you, as mario, can jump and use his hammer to overcome to them, but some might require you to think and explore in order to solve them, but not only that, the game also includes "partners", which are your allies where they can not only help you fight enemies, but they can help you with the game's puzzles that they can only solve, since many of the game's puzzles and boundaries are based upon the abilities of Mario's partners, you can accumulate partners as they advance into different locations, you can only have one partner that can accompany Mario in the overworld, but you can interchange between them at any time, and the best part of all, your partners have no HP ! so that's means that when they take damage, this results in temporary paralysis on them where they cannot attack, but they will never get KO'd, the gameplay on all the overworlds feel like an adventure-oriented puzzle game, and they keep the game from not being just an RPG.

And this is where the uniqueness comes from ! one of the things that make this game unique from some other RPGs is that you can control the actions when mario and a partner or an enemy is going to attack ! a little early in the game, you will obtain an item called a "Lucky Star" which will give you the ability to use the "Action Command", with this you can influence the power of a move when attacking or defending by timing a button-press accurately or performing some other action command as required, like pressing a button repeatedly, tilting the control stick and letting it go in a certain moment, with this you can double up your attacks and reduce half the damage when you're defending ! This is pretty great and it's definitely worth it because it feels like you're helping mario in this game ! another thing in the battle system is that Mario and his partners have a capacity called "Flower Points" (FP), which is the equivalent of magic in RPGs, which these can allow you and your partners to perform special moves, but each of these moves can consume a particular number of flower points when performed, so you must choose to use them wisely.

Other things included are the "Star Points", which are the equivalent of experience points, in which unlike other RPGs, you only need to collect 100 of them to level up, and the capacity does not increase in any way, while this might sound easy to level up, here's the thing, when you level up in a certain area full of enemies, those enemies might decrease the number of Star Points they drop but even that, and this is one of the best parts of the game, is that you don't really need to level up in order to proceed ! the only thing that you need to rely on, are your skills... and your use of badges ! The badges are items you can collect and each of them have and advantage of helping you on a certain manner, like for example, one badge can increase your attack power, one can increase your health, one can gain another special move, some can make you invulnerable to some things, and much much more ! however, each badge consumes a set number of" Badge Points" (BP), meaning that you can only equip a limited number of badges at a time, so choose which are the ones you think they will help you in the game ! There is also an on-screen gauge to display Star Energy, which is required to perform another type of move if you saved a star spirit, and each of them have a unique move that can help you in battle, and they can raise your gauge as you advance throughout the game, you can also locate hidden battle upgrades in the game's overworld, which promotes one partner character to a new rank at a time and they can be stronger as well !

All of this and more, the game is really fun and very awesome as well ! however, even though some overworlds might not be fun, the game is still very great with it's gameplay and uniqueness !

Graphics
Since the game is called "Paper Mario", the game's visuals feature two-dimensional character cut-out designs contained within three-dimensional backgrounds, and the 2D characters look really good ! they look just like a cartoon, and because of that, they never aged at all for how cartoonishly good they look ! as for the 3D backgrounds... yeah, those are the ones that haven't aged well at all, but the thing is, some of them look kind of bland, that not even when this game was released back then they weren't going to look good in any way ! but as it is, the whole game's graphics are nice.

The sounds are cutesy and some of them sound a little bit low quality, but as they are, they sound ok, and as for the voice acting... there isn't any, at all ! not even grumbles or anything like that ! they are just a tiny few of them, but overall, there isn't any !

Presentation
The game is kind of represented as a storybook, the game is divided in chapters, the game's progression depends upon interaction non-player characters (NPCs), who will often offer clues or details for the next chapter, and as I've said, the game does a good work on having a charming and cutesy tone in the whole game.

Price
The game costs 1000 Nintendo points, but thrust me, it's money well spent !

Overall
The game is a great mario RPG ! it has some great gameplay and a charming storyline ! and even if there are some things that needed a few tweaks, this game is still a must get ! but you might be skeptical if you REALLY love Super Mario RPG for the SNES or Paper Mario: The Thousand Year Door for the GCN, but otherwise, don't hesitate and buy this if you like RPGs ! and as for me, this game gets... 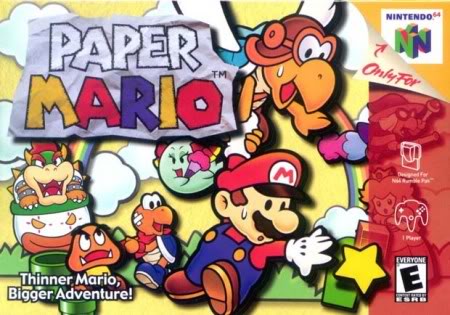 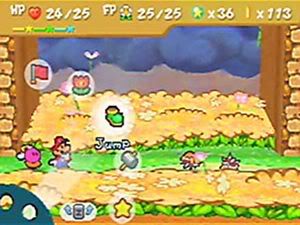 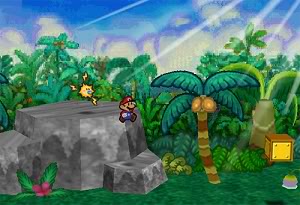 edit-wow have I really been gone for over 2 months

Re: Paper Mario (N64)
on September 5th 2011, 7:03 pmTinglemaster
Paper Mario is one of the best games ever "second only to Zelda" awesome review

Re: Paper Mario (N64)
on September 5th 2011, 10:38 pmTowafan7
Guess what my internet connection is working great,so I'll review something in the next few days

Rukiafan wrote:Guess what my internet connection is working great,so I'll review something in the next few days

Well good for you dude !

I wonder what you will review next...

Well, good luck on your review then !

Re: Paper Mario (N64)
on September 6th 2011, 12:14 amSonicKnuckles
Paper Mario is good but I prefer its sequel Paper Mario The Thousand Year Door =)

What a stunning review Jnes5

Re: Paper Mario (N64)
on September 6th 2011, 12:10 pmGanondorfthewicked
Paper Mario is one of my favorite nintendo 64 games alongside Super Mario 64 and the two Zelda games on the console :3

Re: Paper Mario (N64)
on September 6th 2011, 3:33 pmMarioman18
This game is so funny I mean how many games feature a character that is a woman with a beard like merlin called merluvly

Re: Paper Mario (N64)
on September 7th 2011, 2:24 pmLink_i_am
Paper Mario was a decent game but I prefer The Thousand Year Door and Super Mario RPG over this game

Re: Paper Mario (N64)
on September 7th 2011, 6:51 pmInuyasha4z2
This is the first game of a series that is one of Miyamoto's most brilliant creations

Ive posted two reviews this week. So cheak those out.

@Marioman18 wrote:This game is so funny I mean how many games feature a character that is a woman with a beard like merlin called merluvly

It is a shame that recent Paper Mario games are not RPGs anymore.