Time for the NEP NEP Review of SUPER NEPTUNIA RPG! 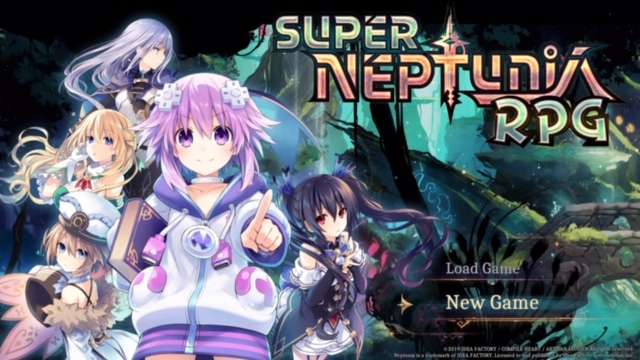 All righty then let’s have some fun with this, first things first, the art style backgrounds of this game are just beautiful; I truly like how everything looks. Now then on we go, Super Neptunia RPG is a side scroller platform type of game but the battles are still turn-based just a little different from the usual. Instead of the usual, those with high speed can attack faster.

This game battle system is set with a circle that fills up and as it does, you can attack depending on how many points of charge it has and how many points each attack does, I haven’t quite figured out what attack uses how many points other than the effect being larger like higher hit damage or higher healing. The story begins as usual in Neptunia game universe, some being going against the goddesses for whatever reason, usually hates them or think goddesses should no longer rule, but after Neptune and the gang lose they lose their memories and powers and wonder about in this new world were goddesses no longer exist.

Slowly they experience living in a 2d world and thanks to a woman named Chrom and Histoire reunite with one another learning of the true nature of this world with its 2d games and how anything of higher quality has been lost or its against the law of a group named Bombyx Morri, so the group has to regain their memories and their power in order to stop them. 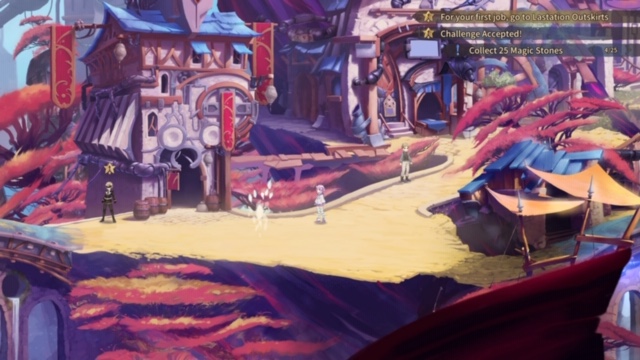 Now the battle system isn’t as simple as it sounds since all four characters share the same circle. It means not all of them can attack at once unless you charge enough points to make them all attack. Also, each character has only one attack depending on their position, once you get the other team members they can change positing mid-battle and depending on what position they are in, you press the button for the character you want to take action.

You learn the skill by buying gear and equipping it and learning their skills by gaining skill exp instead of the usual unlock skills by certain levels. There are attack skills, passive skills and skills that add status like regen or blocking certain type of attacks or elements. Also, you need to take into consideration your attacks as well, because if you attack an enemy that has absorb lightning, for example, your meter that charges goes into negative, making you wait even longer to be able to attack. Also, the enemies work the same way.

They have to charge their meter in order to attack, and also, while these fights are technically turn-based, they still run in real time, meaning that if you just leave the meter charging you’re going to get attacked only opening the menu stops the fights. There is also the break skill which is a bar that charges as you attack, it charges faster if you hit an enemy with a weakness. 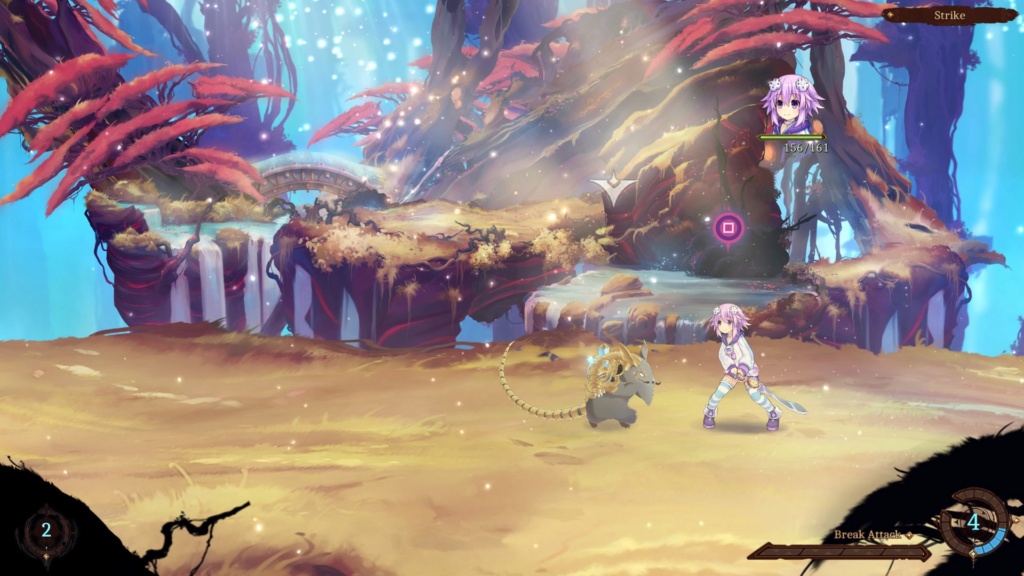 Once you get the goddess power back you can transform like previous games and they have their own unique break skill when they transform as well. Also you should know that due to the meter charging slow these fights usually take very long but you don’t have to worry because the game offers the feature to press L2 to speed up the fight and depending how hard you press it’s how fast it goes, so if you only want to move the fight a bit faster you only have to slightly press the L2 button or if you in a hurry and just want to end the fight fast then press the whole L2 button to make it go really fast.

Right now there are some audio glitches with the game, which can also be caused by pressing L2, whenever a character attacks, they usually say something but if all enemies die and she’s not done, she will say victory line and then finish saying the line when she was attacking for example Neptune has an ice skill that at the end she says “ice cold”  so if I were to speed up fight it would go something like this “get some, (victory line) you can’t defeat a protagonist duh!, (attack line) ice cold!" so yea that can be a little annoying for some and at the moment it hasn’t been patched yet, same with when everyone levels up at the same time they talk together so you most likely won’t understand what they are saying. Sometimes the background music does glitch up but it’s rare it hasn’t occurred to me that much

Now something I find personally annoying it’s that the npcs in this game are extremely limited in what they have to say, as in you can talk to those who have a quest and they will repeat a little of what they want but most other npcs just say this “…” same with the ones you finish a quest once quest done all they say is “….”, which is weird because npcs have voice acting and they say hello or something of the sort but speech bubble just says “…” and it’s very unusual for an RPG game that has interactable npcs and they say literally nothing.

Something I don’t like is that once you pick up a quest while some do give you enough detail to know what to do, some do not, like where you can find said enemy or item. Same with the story. You get a reminder on top of the screen on what you need to do, but it’s very limited and if you were not paying attention to the story, you might get a little confused because unlike previous games where they give you like a quick summary of what you last did, this game doesn’t. Still, this game is super fun and as usual it’s got the making fun of other series or games thing, I won’t tell you which to not spoil it. 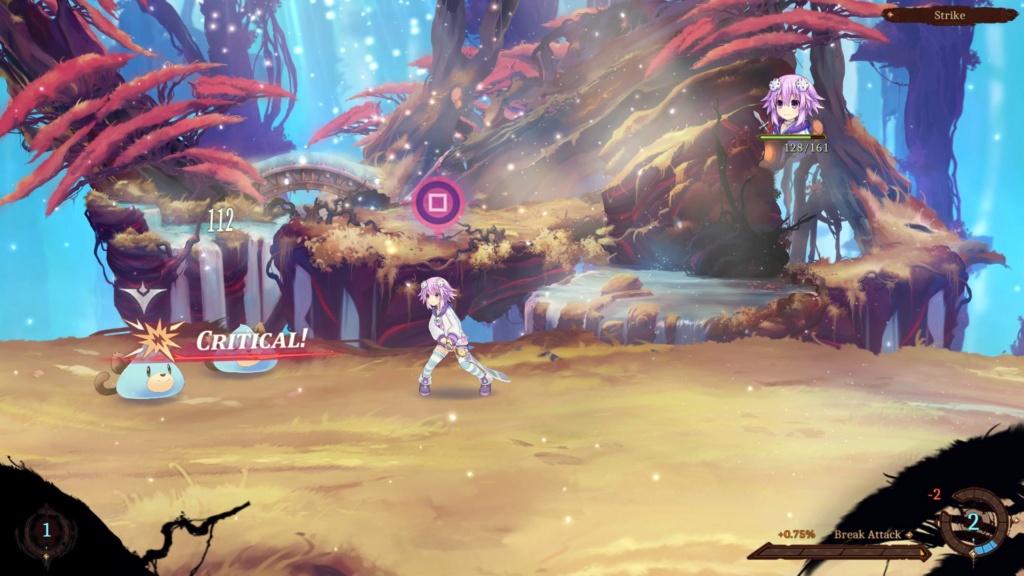 Something that might bother players and honestly it’s really minor, it’s that on occasion the game skips a frame which is strange for the type of game this is but it’s really not a big deal. Sometimes the victory screen kind of glitches out but its only recently starting to happen. I don’t know if it's because of the map, but it’s really minor. Also on some parts of the story, the screen stays black, but it’s not because the game froze it’s just that your suppose to press the x button like if it was continuing a dialogue, but since transition is black you can’t tell.

Re: Review: Super Neptunia RPG (PS4 Retail)
+
July 11th 2019, 5:09 amcatfood
Good review! I just noticed that a bot edited this, was the review format borked by the bot?

catfood wrote:Good review! I just noticed that a bot edited this, was the review format borked by the bot?

I dont even know what that means. But thanks for liking the review

Re: Review: Super Neptunia RPG (PS4 Retail)
+
July 11th 2019, 1:02 pmKrazyredd
@armerocks The review was edited by WiiWareWaveShipBot. The krazy bot seems to single out reviews and edit their format. The question is when did @Towafan7 add the bot?

Great review, @armerocks! I respect you so much for writing in a language that isn't native to you.

Re: Review: Super Neptunia RPG (PS4 Retail)
+
July 12th 2019, 11:27 amcatfood
@TechnicalIssues8 I believe the bot is only editing the format but isn't fixing typos or adding pics. Both of which need to be addressed in this review.

Re: Review: Super Neptunia RPG (PS4 Retail)
+
July 12th 2019, 11:57 amTechnicalIssues8
Yeah, that's what I suspected but was just messing with you guys

Great review, @armerocks!  I respect you so much for writing in a language that isn't native to you.

My english that bad uh?

Re: Review: Super Neptunia RPG (PS4 Retail)
+
July 13th 2019, 11:26 amZatchbell
@armerocks You're Puerto Rican aren't you? I live on the east side and I have same problem. I can't for the life of me get the english structure of language down the way it's used in the mainland of US.

Zatchbell wrote:@armerocks You're Puerto Rican aren't you? I live on the east side and I have same problem. I can't for the life of me get the english structure of language down the way it's used in the mainland of US.

Great review, @armerocks!  I respect you so much for writing in a language that isn't native to you.

My english that bad uh?

you’re English is great. It’s very difficult writing in another language, and you grasped it VERY well.

Re: Review: Super Neptunia RPG (PS4 Retail)
+
July 25th 2019, 3:00 pmOrionJZed
@armerocks @TechnicalIssues8 To be fair, modern English is a complex hodgepodge of bits of virtually every other language, to the point that even people who natively speak it are sometimes a little bit off.

And I'd say your English is impressive, @armerocks. I honestly had no idea it isn't your native tongue, so kudos, my friend!