Kicking Off The Year of RPG's! 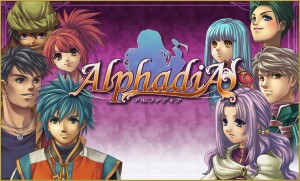 Kemco appears to be finally releasing their 3DS JRPG Alphadia in North America! The game is indeed part of the Alphadia Genesis timeline. For those of you who're fans of Alphadia Genesis on the Wii U eShop you'll likely want to download Alphadia when it hits the 3DS eShop on February 4th! The game will be priced at $9.99! Our source for this information is a listing on Nintendo of America's website and a listing directly on the 3DS eShop in North America!

What do you think of this news? Are you going to download Alphadia when it hits the North American 3DS eShop on Thursday? Be sure to check-out the trailer below and as always feel free to leave a comment in our comments section below!

Re: Breaking News: Kemco's JRPG Alphadia Is Hitting The North American 3DS eShop This Thursday!
+
February 1st 2016, 10:42 pmRWBY_Red
So many roleplaying games are releasing this year that I won't be able to get them all day one.

Re: Breaking News: Kemco's JRPG Alphadia Is Hitting The North American 3DS eShop This Thursday!
+
February 5th 2016, 11:57 amGekkouga-Senpai
This is turning into an rpg paradise!

Re: Breaking News: Kemco's JRPG Alphadia Is Hitting The North American 3DS eShop This Thursday!
+
February 8th 2016, 11:46 pmZatchbell
Who's going to be reviewing this game? Surely someone will be for such a high profile eshop release?

Re: Breaking News: Kemco's JRPG Alphadia Is Hitting The North American 3DS eShop This Thursday!
+
February 8th 2016, 11:57 pmLove4Gaming
@Zatchbell you'd think, but several major Wii U and 3DS games have still not been reviewed on this site including Pokemon X & Y, Hyrule Warriors, Splatoon, Super Mario Maker, Yoshi's Wooly World, The Legend of Zelda Triforce Heroes, and Super Smash Bros. For Wii U to name a few. If only more staff members besides @Ichigofan were still reviewing games the list of unreviewed games would probably get smaller over the course of time.