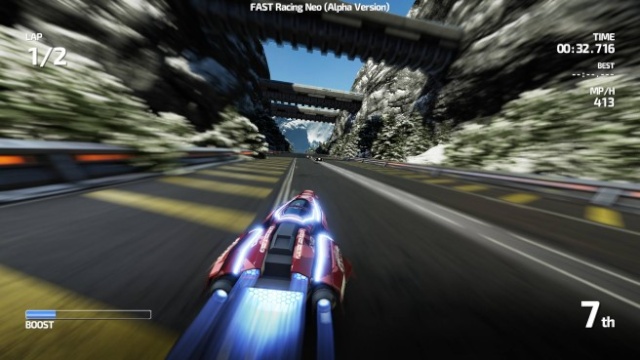 Nintendo World Report released a ton of new details of Fast Racing NEO when they recently previewed the game! Here's a list of the new details regarding the game:

~ Daitoshi Station is another track, set in space ~

~ At another point in that same course, asteroids are also trying to crush you and that stuns players ~

~ Storm Coast and Kamagori City are other new tracks ~

~ Every lap here is over in roughly 35 seconds ~

~ Kamagori City has an old Nanostray boss in the background ~

~ Other references can be found in the final version ~

~ The design is nearly done, but there will be a lot of internal testing before submitting the game for release ~

~ The full game will also feature a variety of modes including the Championships, Multi Player, Online Play and a harsher Hero Mode ~

~ No smaller challenge levels like the previous game, but there will be other options will keep players engaged ~

What do you think of the details that we currently know about this upcoming futuristic racing title?! Will you be downloading the game when it hits the Wii U eShop later this year? Let us know in our comments below!

Re: eShop: New Details Emerge Regarding Fast Racing NEO!
on August 12th 2015, 11:32 amClαππαd
Fast Racing NEO looks like it will be a very fun game, but I don't know if it will fill the void of F-Zero not being on Wii U.
Permissions in this forum:
You cannot reply to topics in this forum