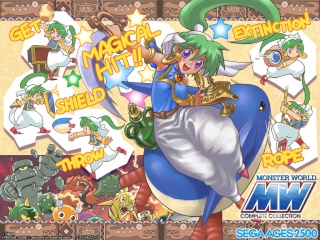 Wonder Boy Blues: It appears that Westone Bit Entertainment the developer responsible for the long-running Wonder Boy series, including the 2012 Wonder Boy IV debut release in the western hemisphere is in serious financial trouble as the developer has announced that they will be filing for bankruptcy very soon and even more worrisome is the fact that Westone Bit Entertainment has shutdown their website immediately after making the announcement which must mean that the company is indeed in a dire situation.

We'll let you know more as more information is released to the press!

Rune Factory European Ahoy!: Rune Factory 4 received a USK rating yesterday much to the delight of European 3DS owners and XSEED confirmed via Siliconera that the leak is indeed real!:

Executive VP Ken Berry wrote:“The situation is that we know the Rune Factory 4 fans in Europe have suffered enough with one cancellation already, so we didn’t want to announce anything until the game passed [Nintendo of Europe] certification and we were sure its digital-only eShop release was imminent since we are using a different programming house to try to pick up where the original dev team left off.”

“Though I can’t disclose which development house is handling the PAL localization programming duties for us, I can say that it’s been in the works for months already and we hope to start the master submission process with NOE within the next couple weeks.”

The game was never released in Europe because of the original developer of the game Neverland went out of business last year, but thankfully XSEED has done its magic once again and because of that European gamers will be able to enjoy Rune Factory 4 on the 3DS in their region!

Are you excited about the upcoming European release of Rune Factory 4? We certainly are!

Smash Bros. 3DS Smash The Japanese Charts!: According to the latest Media Create report Super Smash Bros. for the 3DS has sold nearly 110,000 units this week while the previous week it sold over 320,000 units, however the reason for the decreased sales is that the game has nearly sold out in the region! While this is certainly good news we can only hope that production of the game will be able to keep up with the demand for the remainder of the year while the hype train is still going strong!

Have any of you had difficulty finding a retail copy of the game in your region? We'd like to know!

Re: News Around The Industry: Week 1 Wonder Boy Woes, Rune Factory 4, and Smash Sales!
October 3rd 2014, 3:20 pmFuManchu
I guess that it's time to download the Wonder Boy Games that I don't have yet from the Wii Shop.

Re: News Around The Industry: Week 1 Wonder Boy Woes, Rune Factory 4, and Smash Sales!
October 4th 2014, 12:28 pmFM_Alchemist
Wonder Boy will be missed. I'm not surprised by the Super Smash Bros. sales numbers in Japan though.

Re: News Around The Industry: Week 1 Wonder Boy Woes, Rune Factory 4, and Smash Sales!
October 4th 2014, 2:22 pmPhoenixSage
So this is going to be a weekly feature?