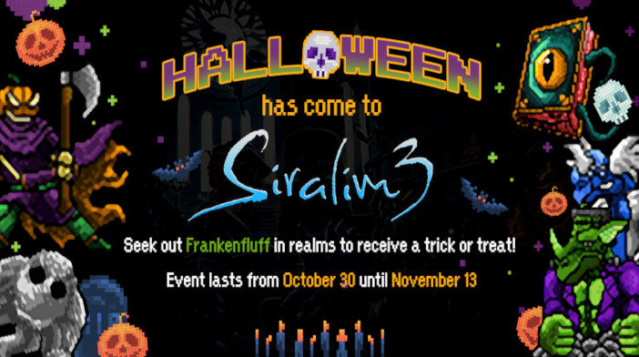 We hope you guys and gals have been enjoying your weekend so far and we've got a special treat for you all as we recently interviewed Thylacine Studios about the then upcoming Siralim 3 and are now publishing the feature, which is our first developer's interview in more than two years. We plan to publish more developer's interviews in the upcoming months as well. Without further ado here's our interview:

[WWW]: Hello! Thanks for taking the time to answer our questions!

[Thylacine Studios]: Thanks for the interview!

[WWW]: What games were your biggest inspirations for creating the Siralim series?

[Thylacine Studios]: Siralim was primarily inspired by an old Gameboy Color game called Dragon Warrior Monsters. DWM is all about capturing and breeding monsters and using them to fight in randomly generated dungeons, which is the core of Siralim's gameplay as well. Additionally, ARPGs like Diablo, Path of Exile, and Grim Dawn inspired Siralim's depth of gameplay and itemization.

[WWW]: What's new in your third installment in the Siralim series?

[Thylacine Studios]: More than I can realistically list here, but I'll try to name just some of the new features:

- New story featuring a set of 15 new boss fights.
- Over 100 new creatures to collect, for a total of nearly 800 creatures. All creatures now have rare "Singular" versions as well, which have unique color palettes.
- New type of end-game content called Itherian Realms. These are randomly generated dungeons that have randomized properties which affect the enemies you'll find there. If you defeat the boss of an Itherian Realm, you can upgrade a new type of item called "Talismans" which grant you passive effects. This is the richest end-game content the series has ever had, and it's where players spend most of their time in the game.
- Nether Crucibles, which is sort of a "boss rush mode" in which you can unlock exclusive abilities for your creatures.
- Asynchronous player-versus player battles.
- There's a new Knowledge System in which you will gain an increasing amount of knowledge about each creature over time. As you gain more knowledge, you'll unlock creature-specific perks such as being able to view an enemy's health bar in battle or increase that creature's chance to drop rare items when you kill it.
- Detailed lore has been written for all ~800 creatures in the game, totaling over 60,000 words. That's roughly the size of an average novel.
- Breeding has been overhauled and is a lot more accessible than it was in Siralim 2.
- Major quality of life improvements, including a revamped user interface and faster battle system.

[WWW]: Just how long do you think a typical playthrough of Siralim 3 will take most players?

[Thylacine Studios]: The game is intended to last players for as long as they wish to continue playing. There's no true endpoint in the game, which is why so many of our players are still enjoying the game past the 1000 hour mark. Some people stop playing after 40 hours, while others will probably continue to play indefinitely. There's no level cap, and there's no limit to how difficult the content can become.

[WWW]: Can you tell us more about your studio?

[Thylacine Studios]: Technically, Thylacine Studios is a one-man operation. I'm the designer and programmer for all our games, but I hire freelancers to create things like graphics, music, sound effects, and more. Recently, I've been hiring people who are avid Siralim players. For example, the two people who wrote the creature lore for the game (Mario and Sergio) have been playing the Siralim series for several years now. My ultimate goal is to work with people who are passionate about the game rather than someone who is merely looking to treat their work as a routine job.

[WWW]: When you're done with the Siralim series is there a dream project that you folks would like to work on?

[Thylacine Studios]: I have several dream projects, and I'm working on one of them right now! It's called "The Negative". The Negative has the monster catching gameplay and complexity of the Siralim series mixed with the environment and feeling of hopelessness that you might feel in games like Dark Souls or Bloodborne. It's a much higher-budget game than Siralim, and I think some of its features are going to blow people away. I'm excited to reveal more about the game soon!

Also, I've always wanted to work on a game similar to Final Fantasy Tactics. There aren't many games out there with FFT-style gameplay, and I have several exciting ideas to deliver a fresh experience to this genre.

There's definitely a lot more to come for the Siralim series as well.

[WWW]: Thanks for allowing us to interview you! Hopefully we can do this again sometime!

[Thylacine Studios]: Thanks for the interview, and thanks to everyone who reads it!