More Fun Than A Barrel of Monkeys!

The evil K. Rool and his kremlin army have stolen all of the bananas in the jungle. It's up to Donkey Kong and Diddy Kong to get them back!

Gameplay
This is an extremely fun platforming game that has over 30 unique levels as well as an interesting buddy system where you can freely switch between the two Kongs to help you progress through each level! Donkey Kong can ground pound which can reveal hidden items and can defeat large enemies. Diddy Kong can't, he can run faster and jump further than Donkey Kong though!

Another unique feature in the DKC series are the animal buddies. Each of them help out with thier unique abilities. For instance, Engarde the swordfish can harpoon underwater enemies with his nose and Rambi the rhino can defeat enemies and bust open walls revealing hidden passageways by charging towards them!

Graphics and Music
This game has mind-blowing graphics for a game released in the early 90s as it was one of the first games to use 3D sprites on character models as well as the background scenery and frankly is still impressive to this day!

The music is just awesome and is some of the best music you'll hear on an (SNES) game (especially the underwater ambience theme)! 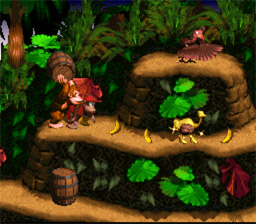 Bottom line: This is an awesome platformer with gameplay that is both unique and enjoyable, excellent graphics that still manage to impress and "Funky" music that compliments the game nicely. It's well worth 800 Wii Point!

DKC is good!
May 5th 2011, 12:48 pmDigiDestined
I really enjoy this game because of its great classic sidescrolling gameplay,Cool levels especially the underwater ones,and its difficulty to beat it 100%

Sort of on the short side though.

Re: Donkey Kong Country (SNES)
March 27th 2012, 9:48 pmTowafan7
I know this is one of my older reviews, and I wasn't good at all back then, but you can post a second impressions review if you want.

Re: Donkey Kong Country (SNES)
March 28th 2012, 11:48 amTowafan7
I'm looking forward to it, oh and maybe since this is review is in the virtual console review section, maybe yours should be in the Retro review section.

Re: Donkey Kong Country (SNES)
November 29th 2012, 12:57 pmAqua Cherry Blossom
It's unfortunate that such a good game has been remove from the Wii Shop.

Re: Donkey Kong Country (SNES)
November 29th 2012, 1:22 pmNINTENBRO
If we had been given some type of notification from Nintendo that the Donkey Kong Country trilogy was going to be removed, I would've at least been able to download the original. I guess Donkey Kong won't ever be making an appearance on my Wii Virtual Console, because I could really care less about the arcade game. Especially when I've already downloaded Donkey Kong 94. Thanks, Nintendo! You have nobody but yourselves to blame for this bad customer service.