James "Jimmy" Hopkins arrives at Bullworth academy after his mom and new stepfather drop him off while they prepare for their honeymoon, but in order to fit in, Jimmy must earn each student group's respect while "keeping his nose clean" at the same time.

Story
For a story about bullyism (if that's even a word), the story is pretty well done ! well ok, the whole story is pretty over the top and can even get a little unrealistic, but the story is represented that way because it's main focus is to be humorous, and the game does bring some good humor !... but the humor really focuses on the whole being mean to someone or in other words "Bullying", but even if you're offended by those type of things, it's still very humorous because none of this is meant to be taken seriously, and because this is from the same studio that also made the Grand Theft Auto games...

Gameplay
Bully: Scholaship Edition is a sanbox game that plays kind of similar to Grand Theft Auto, but not by much since you can't steal people's cars and focuses more on the teenager stuff rather than the mature ones found in Grand Theft Auto, however at the start of the game, you are limited to go to the city since there are sections where the roads are blocked and they can be unlocked if you've done a certain main mission, and even though there are cops as well, the shool does have prefects and if these prefects caught you doing something unusual like violence against girls, smaller kids, etc., they will chase you (which you can also escape from them) and if you get caught (which you can also shake away from them), you will go to detention, you will also get busted by the teachers and even some townspeople if you're in the city, and if this happens, the mission Jimmy was doing will be a failure, and most of Jimmy's weapons are confiscated.

The game requires the wii remote and nunchuck controls, throughout the game, you will unlock different weapons such as a slingshot, eggs, stinkbombs, firecrackers, you know, "prank items", you can use this items by just throwing them or lock on to someone and throw it at them or by using the scope and you can aim to where do you want to throw, but ther thing is, you can't move the cursor, it always stays on the center and the only thing you can do is move around the wii pointer and that way the cursor in the center can move, and it can move through different speeds depending on how far is the wii remote pointer at the edge of the screen, but since there is no cursor to indicate where the wii remote pointer is, it can be a little frustrating to control, but on the positive note, you can also punch by selecting your fists as a weapon and then shake the wii remote and nunchuck in order to emote each punch, and you can even learn some combos and special moves later on, and unlike most games, the shaking feels very natural and responsive as well, and such the controls
overall are fine.

But the game also relies on minigames as well, since you're in school, the classes you take are played like a minigame and can be broken into five levels of increasing difficulty, and if you and if you complete them in a certain range, not only will you get a good grade, but it will also benefit you on the gameplay, like for example in Chemistry is a "quick time event" minigame (and a very good one mind you), and if Jimmy does well, he gains the ability to create firecrackers, stink bombs, and other items at his chemistry set in his room at the dorm, and another example is the Shop classes, if you do the minigame correctly, Jimmy can build increasingly high-performance BMX bikes, and use them in either races or a bike park. There is also minigames in the city where you can win money as well so you can buy a lot of things such as items, something out of a machine like a soda or an arcade machine and even change Jimmy's physical appearance to your liking by purchasing new clothes, haircuts, masks, or even tattoos. And there's also a carnival that has minigames as well, and based on your performance, you will win some tickets so that you can buy other things in the gift shop.

There's also even multiplayer included in the game, but sadly you can only play the classes minigames rather than playing coop in the main story, but even so, I find the multiplayer to be very fun and competitive, so no gripes there.

So there's that and so much more to do in the game, but Im afraid I can't list them all in here since this is just review and not a novel, so yeah, this game is pretty fun and had a great time playing this game.

Graphics
They look ok and they can get the job done, but it could've been a lot more better, I mean the character desings are fine, but the whole backgrounds and everything have this kind of a pale-ish color that makes this game look somewhat muddy, even though it will not affect your gameplay aspects, you can't help it to feel like it should've been more, if not, a little better.

The sounds are very good too, they do an amazing job on how a thing should sound like, and even though some sounds kind of hear unrealistic, the majority still does a great job. And as for the voice acting, there is a lot of voice actors where they each represent a person, and they all sound amazing ! the students sound very natural, the teachers sound just how they are represented, and other people do a good job as well, but the game is english only, so you will only find your other language on the subtitles.

Presentation
Wow... where do I start? ok so, let me get this out of the way first, this game was originally for the PS2 simply called "Bully" and "Canis Canem Edit" in PAL releases (... for some reason...), and this game is the "Scholarship Edition", which includes 8 new missions, 4 new characters, 4 new school classes (Biology, Music, Math and Geography) and new unlockable items and clothing.

The game's enviroment takes place in a fictional town where it's supposed to take place somewhere in the New England area of the United States, the town is split into four separate boroughs including the school, be it the town, some factories, the slums, and much more, however the whole place feels a little small, but it is very convincing that it is a city since the interactions with the students, the teachers, the adults and others all feel very natural and not that awkward at all.

Aside form that, there is a lot to do in the game, be it a lot of collectibles in which you can unlock some things if you collect them all, the minigames, and even when you finish it, the game still continues in which you can do whatever you want ! so yes, the game does have a lot of replayability and it can get a lot of time in order to complete this game in 100%.

Overall
This is a great fun game ! I really enjoyed the whole game and I felt that there wasn't any gripe included into it, and if they where, they were easily gotten used to because of the fun gameplay, the interesting story, the amount of things to do in the game and so much more ! so don't hesitate on this game, if you can find it, then go ahead and pick it up ! Hopefully you won't regret your purchase ! and as for me this game gets... 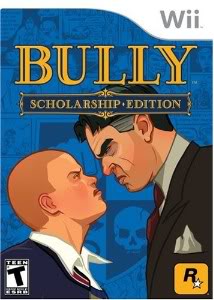 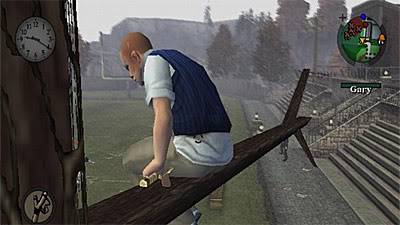 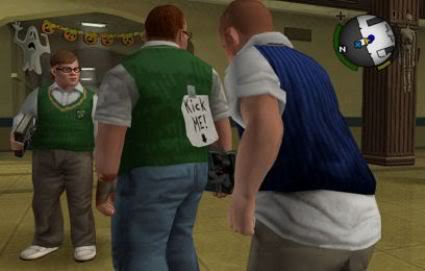 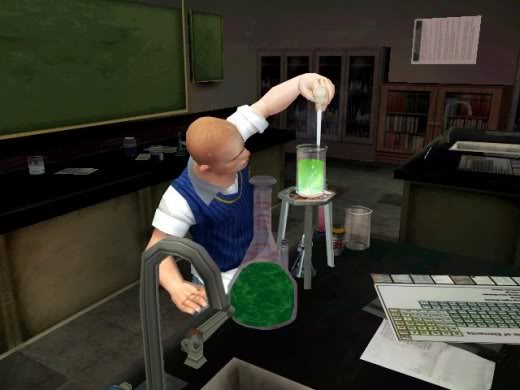 Re: Review: Bully: Scholarship Edition (Wii Retail)
August 23rd 2011, 12:02 amObjection Blaster
Gah! I hate these kinds of games with a passion,but I must digress your review is great

Re: Review: Bully: Scholarship Edition (Wii Retail)
November 17th 2011, 10:16 amSKTTR
When I got this cheap 2 years ago, it was a total surprise that it has turned into one of my favourite Wii games.
There's just so much interaction and realism - it's second to none.
Great length and freedom as well, with extremely good voice acting and a rockin' soundtrack, and tons of variety in gameplay.

My favourite Rockstar game and the best version of it.
10/10

Indeed this is a great review.

Re: Review: Bully: Scholarship Edition (Wii Retail)
April 28th 2012, 8:37 pmBiorn the Viking
Bully is most definitely worth checking out and this review is very well written. Am I the only one who spent hours at the carnival? Those minigames are really well made. Loved the review, Jnes5.

Re: Review: Bully: Scholarship Edition (Wii Retail)
July 1st 2012, 6:24 pmPyrafan7
I've said this before. I'm not a fan of violent games, but despite that I feel that you did an amazing job with this review.

Re: Review: Bully: Scholarship Edition (Wii Retail)
July 1st 2012, 6:39 pmToughGamer
Some of the pranks you can do in Bully are funny as hell.

Re: Review: Bully: Scholarship Edition (Wii Retail)
July 1st 2012, 7:59 pmSKTTR
The gameplay is amazing. You can do things you can't do in any other game. It's realistic, atmospheric, full of variety, and full of fun content. The few flaws are nothing compared to the freedom you have in that game.
The graphics may be only on PS2 level (on the highest one though) but every area is populated, vivid, and realistically animated. There's tons of actions to do, moves, items, vehicles, weapons, etc.
There's more actions and freedom to be found than in recent Zelda games.

And the music is great!! The story is cool as well. Like going back to school!

I love this game. One of the best Rockstar games, one of the best PS2 games, and I'm glad Nintendo fans got a great Wii port. 10/10

Help please
May 12th 2014, 2:57 amHenivana
Great review really!! I would just really appreciate help, I am still at party 1

I can't seem to get past the bully at the boys dorm.. Where they show you to press Z, my caracter seems to grab and throw him to the side, he does not want to hold on and hit him. I feel hopeless cause I try over and over but don't seem to get it right, any suggestions would help a lot, Please

Re: Review: Bully: Scholarship Edition (Wii Retail)
May 12th 2014, 6:20 pmPyrafan7
Welcome to WiiWareWave @Henivana! I hope you enjoy our community!

Anonymous wrote:Great review really!! I would just really appreciate help, I am still at party 1

I can't seem to get past the bully at the boys dorm.. Where they show you to press Z, my caracter seems to grab and throw him to the side, he does not want to hold on and hit him. I feel hopeless cause I try over and over but don't seem to get it right, any suggestions would help a lot, Please