another game i grew up with but this one i regret i did. even if its a disney game its still horrible. the game i talk about is tale spin. now why is it horrible? i will tell you. first problem i have is its damn hard and the enemies are the cheapest you met. even at easy difficulty its still hard. this is my review of this game

1. start up/intro
well the start up looks ok. could be more color like the other disney games. but anyway that dosent matter in this case. another thing is the intro. of course its not bad to have a intro but here is the case if you dont watch all of the intro you are not gonna know what to do in this game and are you kidding me are you seriously gonna read all that stuff in the intro. its like a 3 min long intro. all i want is get started right away, play the hell of it but you cant. you must watch the intro. if you are a first player and dont watch the intro then i think its intresting to see how you do in the game.

2. gameplay
ok im gonna be nice. im gonna tell you what you are supposed to do so you dont have to watch the intro. what you do in this game is that you have to collect 10 cargo boxes. wait what? is that hard? yes its hard. the first 2 levels is easy i said easy because they dont put the boxes that randomly in the beginnig but later on you will going through some serious trouble when you try to find them. you're gonna get lost, you're gonna die and you're gonna get pissed and to make it even more cheaper you have a time limit. you have to complete this game on 7 days = game days, not real days :Ponce that time is over then the game is over and you have to start the thing all over. but damn i havent even started talking about how easy you can die in this game. anything can kill you in this game and i mean anything. everything from seagulls to goons, from water to roof and they kill you on the most cheapest way any game on earth ever done before. so you have to find the cargo fast, avoid the enemy and run to the end. thats another thing i havent told you about. finding the exit should almost be the first thing you do in this game because its a mess trying to find it when you got all 10 cargo. exit is hidden on the most troublesome place. even if it has a neon sign saying exit you wont find it. and if you find it then you must make sure you got 10 cargo. the controls are aweful. they are are so slippery. you end up sliding of ledges and falling down and probally die. everytime you complete a level you always fight a boss. if you playing it at easy then the bosses are easy. then there is a flying stage. let me tell you they got really evil when they created that. the flying stage is where you lose your life over and over and over again. you have no chance of killing them all. they hit you before you hit them. you can choose to play as baloo or kit. if you chose baloo then i feel sorry for you. baloo is slow and his attack range are low. he might take more damage than kit but not that much. kit on otherhand is fast shooter and has a long attack range which you gonna need for those enemies

3. graphic
the graphic could been better, more colorful. i have seen better disney game that had better graphic. the graphic is urgh

4. music
music sounds like Crab. it might sound ok but judging how bad this game is ok is not enough

5. fun factor
sigh. i would enjoy this game if it wasent this hard, cheap and bad created. i like the concept that you go around collecting cargo and then go to the exit but i dont like having a time limit, enemies that kills you fast like Bleep and getting lost. in otherword it sucks. well you can play 2 on this game but who would want to do that?

6. difficulty
its like i said its so hard it scares the black hole away. even at easy its hard. i have never beated that game. if you play at normal good luck try to manage to get on 3 and 4 stage. if you play at hard mode then you are the biggest masochist i ever known. i rank difficulty to 8/10  hard and cheap

final score: i give this game 1/10 not worth it, stay away from it. i dont even think there is a walkthrough on it. this is probally the hardest game i ever played but for wrong reasons and i dont suck on videogame. if i do then try this game for yourself and then we see who sucks

1- Pathetic This game should be thrown in the trash, because it's utter garbage!

random talk:
i have some stuff i have to say. i would expect this game to be a fun game when i first got it because it looked like fun. i have never been more disappointed in my life. why did they have to ruin it? take a good look on ducktales. good serie and good game on nes. they could do it and even chip n dales game on nes worked well. so why couldnt this do the same?

here is some pics of the game 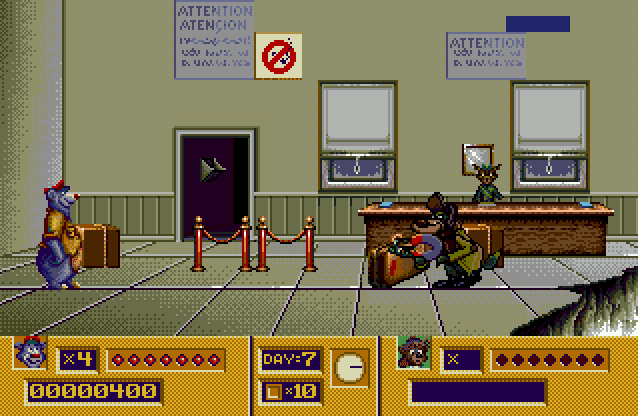 this is silks of sweden review. i hope you like this review. stay tuned for more

Re: Talespin (Genesis)
on August 10th 2011, 1:12 amTowafan7
I remember this game I was 7 years old at the time and I really thought it was an awful game

Re: Talespin (Genesis)
on August 10th 2011, 1:13 amsilksofsweden
yeah it gave me nothing more than problems

Re: Talespin (Genesis)
on August 10th 2011, 5:51 amSneaker
I have the Game Boy version (which is similair to the NES version). And that one is okay. It's basically a Shoot-'Em-Up instead of a platformer.

Re: Talespin (Genesis)
on August 10th 2011, 5:51 amsilksofsweden
yeah the nes and gameboy is way better than this piece of Bleep

Re: Talespin (Genesis)
on August 10th 2011, 12:45 pmRoboYoshi
This is an awful game that deserves to be thrown out of a plane

Re: Talespin (Genesis)
on August 10th 2011, 12:48 pmsilksofsweden
i swear the flying stage is impossible. i would pay 100$ to the one who beat the game on hard difficulty without cheat and having proof to beat the game

But yeah, this game sounds terrible, im surprised that it is not infamously known for being a very horrible game.

Anyway, thanks for the "warning" silks !