now time for another retro game review but this time on a console that was one time super awesome. im talking about sega genesis. i just wanna point out that nintendo were always my best console but i couldnt deny that genesis were good. it had very good games and their own unique style of sound and music. there are more than just a game its a ... *one hour later* and thats how it is. now to the game. the game im about to review is world of illusion NOT castle of illusion. many people did think it was the same game since it both have mickey mouse in it. yeah you heard me its a disney game so what. disney made alot of good game as well as bad games. this is another game i grew up with but its been a while since i played it so i had to play it again. i give you a link to my walkthrough *see at the bottom for the link*

1. intro/opening story
the intro is very nice and cool. the plot is that both mickey and donald are going to have a magic show for their friends. however donald found a hidden door and of course he fall inside it. so mickey decides to go inside and get him out. but there is a wizard that says that their magic is good in their world and challenging them in the world of illusion. if they can beat him in the world of illusion then he teach them how to get back to their own world

2. gameplay
its a classic sidescroller adventure game. you can chooce if you wanna play as mickey or donald. you can also play as 2 person so thats nice. the game is not hard at all. its fun and cheerful and magical if you can believe it. you attack enemies with a magic blanket and turning them into diffrent things. but at some point it can be tricky. some enemies are smart

3. graphic
for genesis then its a very good graphic on this game. its very creative and each stage have their own unique style. its magical to the end. the graphic is probally the biggest reason why this game looks intresting. also in this game its also alot of cameo like mad hatter, the cards from alice in wonderland, the witch from the sword in the stone and many more. i like it

4. music
the music is very cheerful and intresting. its a kind of music that makes it more magicaly. it feels like a dream

5. fun factor
fun is it. it could be little harder though. its quite easy game but if you ask me then nothing is more easier than aladin on snes. now that game is easy. that is way easy. anyway you wont get bored with this game. its fun to play from time to times. its a game you play once and then dont play for a while

final score: i give this game 5/10 its a ok game to play when you are bored and got nothing better to do 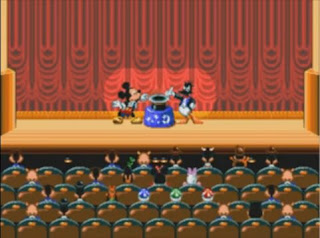 Re: World of Illusion (Genesis)
on August 7th 2011, 3:44 pmJnes5
I can't say I have played this game since I never had a genesis before, but by looking at this, it looks like a pretty good game.

But I have played Disney's magical quest and Mickey mania both for the SNES (and GBA) and both of them were pretty good !

PS: I saw your walkthrough vid, and I can't believe you sound like that ! XD

Re: World of Illusion (Genesis)
on August 7th 2011, 10:13 pmsilksofsweden
i know i sound gay in my videos haha

silks wrote:i know i sound gay in my videos haha

Re: World of Illusion (Genesis)
on August 8th 2011, 12:15 pmsilksofsweden
have you seen my walkthrough? if not then check it out here: http://www.gameanyone.com/game/GEN/11021.html

Re: World of Illusion (Genesis)
on August 8th 2011, 12:18 pmObjection Blaster
I'll check it out,btw where has everyone gone the last couple weeks have been agonizingly slow here on the forums

Re: World of Illusion (Genesis)
on August 8th 2011, 12:19 pmsilksofsweden
yeah you are quiet right. before i got tons of request for review but now i do review and hoping that anyone write on it and make a big fuss of it

Re: World of Illusion (Genesis)
on August 8th 2011, 12:24 pmSonicKnuckles
This is a decent game but I'm not too fond of it mainly because I'm not a fan of disney games other than Kingdom Hearts but regardless your review is very good!

when will you review your next game

Re: World of Illusion (Genesis)
on August 8th 2011, 12:36 pmsilksofsweden
very soon. i just played a horrible childhood game on genesis

Re: World of Illusion (Genesis)
on August 8th 2011, 12:41 pmsilksofsweden
its so bad. have you ever played tale spin on genesis? and yes its a disney game