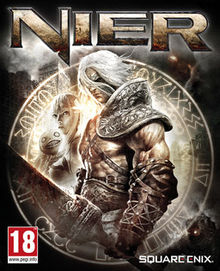 
What is it about?
Set in the distance future of year 3361, monsters known as Shades have been terrorizing the place. Your daughter Yonah has been infected with an incurable disease known as the black scrawl. As the loving and caring father, you went out of your way to find a cure for her. Instead, you stumble upon a legendary talking book called Grimoire Weiss and received hints on how to cure the black scrawl once and for all.


Storyline: 9/10
Directed and written by the famous Yoko Taro himself, you will absolutely going to expect to have a crazy journey as you play through the game. As I mentioned earlier, this whole game is mostly about you going your way (till the point of sacrificing yourself) to find a cure for your daughter Yonah. But is this all that is to it?

In the beginning of the story, you had to journey to an abandoned castle infested with shades to rescue Yonah. Unable to defeat the shade, you enlisted the help of a hovering magical talking book called Grimoire Weiss. Borrowing the magical powers from Grimoire Weiss, you saved Yonah and learned that by acquiring more ‘Sealed Verses Power’ (aka magic), you will learn the truth of the black scrawl and eventually the cure for it.

The characters that you encountered in the game are likeable and fun. Despite hearing the constant bickering between Kaine and Weiss, there is just a sort of chemistry between them that you can’t help but love their interaction. Both the story and dialogues are amazingly well written. At certain times, you are forced to read a wall of text in the form of a story, again it was written well enough to fascinate you.

Not to spoil the story too much, you are required to complete the game at least 4 times to fully appreciate the beauty of the story constructed by Yoko Taro. The lore and the universe are nicely build that by the time you’ve completed the game, thoughts and questions will haunt you for the next couple days. And for whatever the reason is, I can assure you that you will definitely have an amazing time spend with Grimoire Weiss, Kaine and Emil. 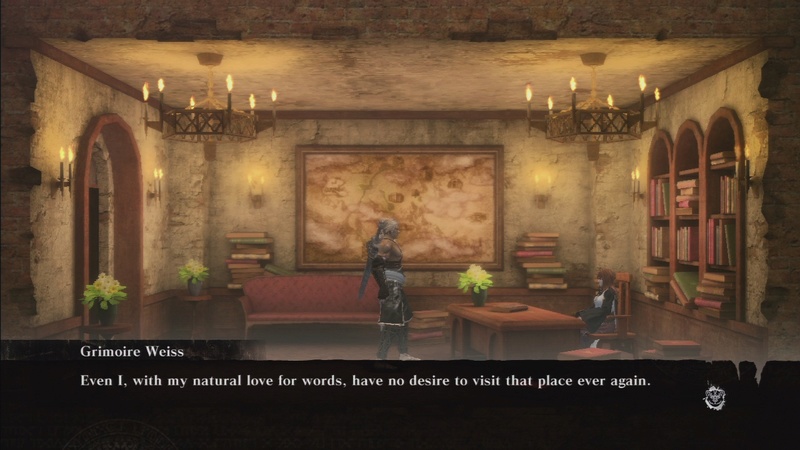 For the most part of the game, you will constantly hear Grimoire Weiss chatters away.

Gameplay: 8/10
Taking control of the main character, an ugly looking old man, you play him through a third-person perspective as an open-world action RPG. Despite being an open-world, the places that you can actually explore or visit and quite small, and there is no doubt that there’s a lot of backtracking to previously explored dungeon. Thankfully, your subsequent visits back to the dungeons would usually introduce new mechanics or puzzles for you to pass through so it won’t be too much of a hassle. 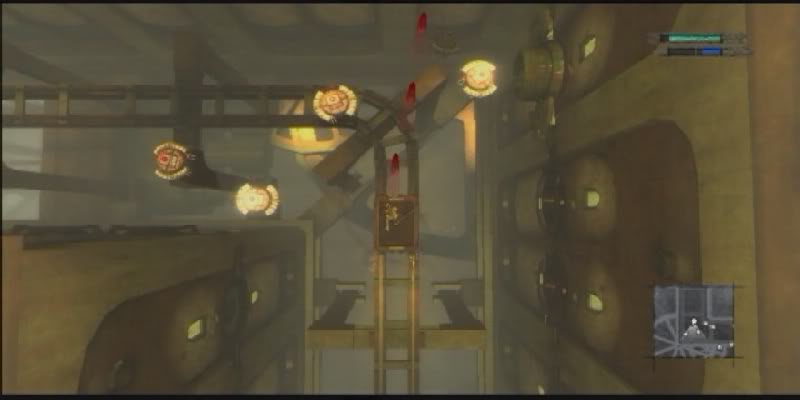 Bird-eye view of the gameplay. There are some sections of the dungeon that requires you to do so.

As the buff dude, you are able to view various type of weapons such as one-or two handed sword, or a spear. With just a button, you can instantly change weapons during any time in the game. Played very much like a hack and slash game, you can defend, evade, jump and do both light and heavy attacks. You can even upgrade the weapons using raw materials and money to further power them up. 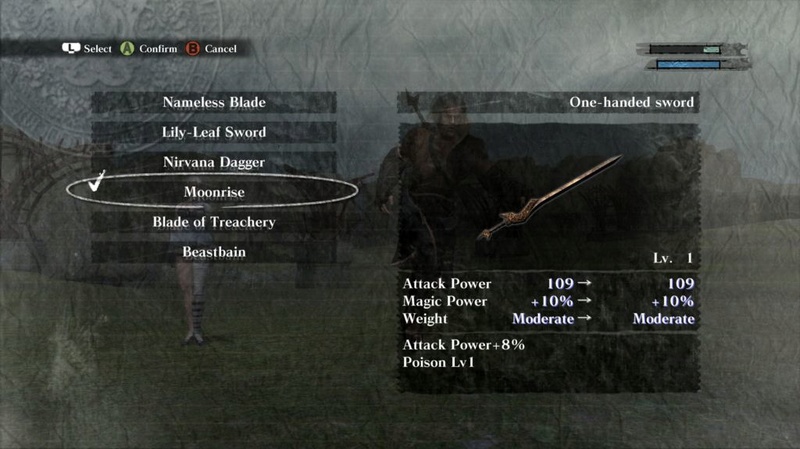 Depending on the situation, you may need to use certain weapons to defeat some enemies.

Partnering up with Grimoire Weiss, he grants you the ability to use magic spells too. You can’t level up your magic spells, but you can charge up your magic spells to unleash a more powerful version of it. Mana automatically recovers over time, so you do not have to think about saving up your magic for special occasions. As a positive result, it actually encourages you to constantly use magic, especially since it is highly useful for most situations. Sometimes when you kill the shades, you will obtain “words”, which allows you to attach them to your weapons and magic and grant additional status to it such as increase strength, magic, increase drop rate etc. 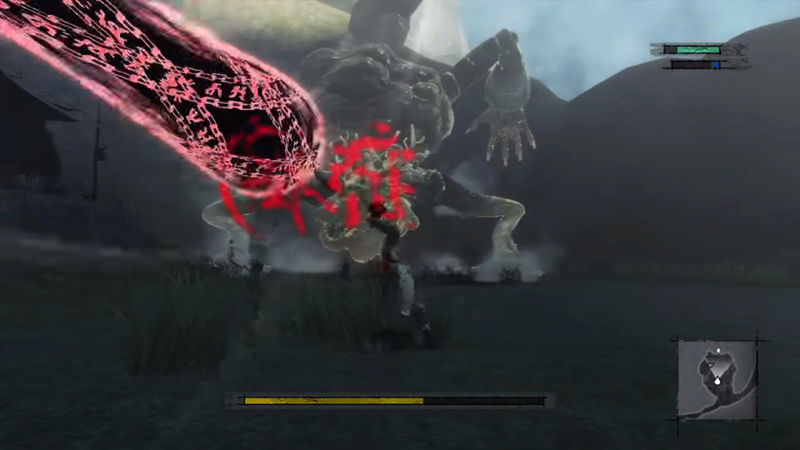 Your mana will regenerate over time so keep spamming it!

There are tons of sidequests to do in this game, including fishing. Boss battles are exciting to battle against as you require some sort of strategy to beat them ala Legend of Zelda style. Overall, gameplay is highly satisfactory and there was never a dull moment while playing this game. 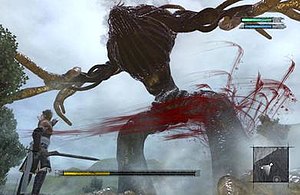 Simply hacking the boss will not help you beat the boss. You will need to exploit it’s weakness to defeat it.

Sound/Music: 9/10
If there happened to be a concert for both Final Fantasy and NieR at the same time, I would choose to go to the NieR’s concert without a single hesitation.

NieR’s soundtrack is so amazingly beautiful that you can feel all sorts of emotions while playing this game. Epic, happy, grief, anger, everything! Not to mention that the music is presented amazingly well for almost everything, except for the village’s music which I wished Devola would just keep singing instead of us only listening to the instrumental version most of the time. By the time of writing this review, I’ve probably listened to the official soundtrack for almost for than 100 times! Classical music with a mix of opera, even if you’re not a fan of classical music, you’ll definitely have a great time exploring the world with its amazing soundtrack. Comparing it to Final Fantasy 13, the only Final Fantasy game for the PS3, there is absolutely no doubt that it puts Final Fantasy 13’s soundtrack to shame! 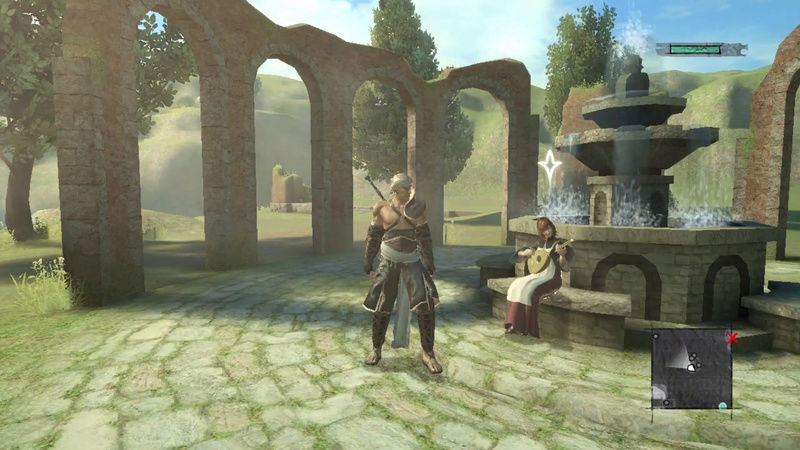 I could literally just leave the game on for hours just to hear Devola sings that amazing song over and over again!

Graphics: 8/10
For PS3 game, although the graphics look a little grainy, the world and dungeon design are still intrigued enough to make you explore the world. Aside from your ugly looking main character, you do get very interesting character designs such as Kaine, Emil, Devola, Popola and others. Despite the fact that almost all of your enemies are in colours of black and gold, surprisingly there are different varieties of monster design. All in all, it’s not as eye-candy as Final Fantasy XIII, but it’s still pleasing to look at the graphics. 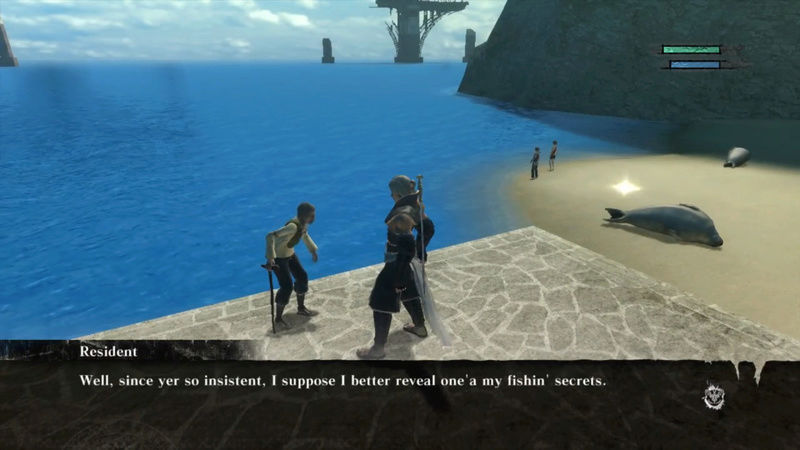 Fishing. My favourite kind of mini-game in a RPG! *being sarcastic*

Final Score: 9/10
If you don’t have this game, get it now! This game is a masterpiece! Despite the short-coming of the game being too short (if you know what you’re doing), it leaves a deep memorable moment in your heart. Although it is quite repetitive to replay the game at least twice to get the additional cutscenes and ending, but I assure you that the time spent is well worth it. So what are you doing now? Go and get started playing this game now!


Will I replay the game for a second time?
For this masterpiece? Absolutely! Gorgeous soundtrack, amazing story and fluid battle system, I am not surprise if this is a Final Fantasy game instead! In fact, this was actually my third playthrough when I’m writing this review and I am looking forward to replay this game again in the near future!

As always, thank you for reading this review and I hope to see you soon in my next post! Goodbye!

Re: Review: NieR (PS3/Xbox 360 Retail)
February 11th 2018, 8:25 pmTowafan7
This is definitely on my radar for future PS3 purchases! Great review dude, and thanks for continuing to publish quality content here at WiiWareWave.

Thank you for writing such wonderful reviews cuz I really enjoyed reading them.