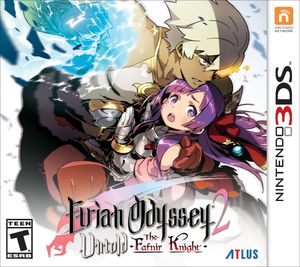 When strolling through your local woods is not enough

What is it about?
Much similar to its predecessor and also a remake of Etrian Odyssey II: Heroes of Lagaard, you control a party of five to climb more than 20 floors of a dungeon called “Yggdrasil”. New to this remake, a story-mode has been added and you can select or change your game difficulty at any time of the game.


Storyline: 5/10
If you’re playing the Classic Mode, which you are able to form your own party, then the story is pretty much non-existence except for the snippets from the Main Mission. By playing the Story Mode, you can name your own main character, however the class and characters have been pre-determine for you.

In the Story Mode, you control a Fafnir Knight, whom has been selected by an 18-year old girl named Arianna, the Princess of Caledona, to assist her to complete her ritual in a mysterious dungeon called Ginnungagap. During your trip down in Ginnungagap, you suddenly encounter a dangerous FOE (a term for mini-boss in the Etrian Odyssey universe). Facing your demise, your powers suddenly awaken and you transform into a monster. Since then, you spend most of your time in the game figuring out how to proceed with Arianna’s ritual, and what is the purpose of mysterious transformation powers that you’ve acquired.

Story for the most part is simplistic and straight-forward, so don’t expect any epic adventures or plot twist in the game. Etrian Odyssey 2 main focus is on the gameplay and the dungeon exploring, therefore the lore and the story aren’t really developed that much. The story is presented in a ‘Visual Novel’ style, so you can expect good writing presentation in the game. 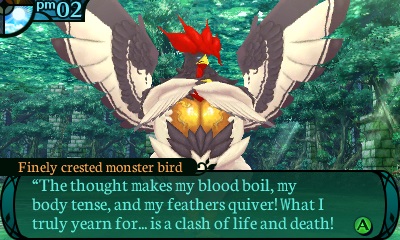 I’ve always told you not to bother the chicken too much in Zelda games. Now their boss is back to make you pay back for what you did to them!

Gameplay: 8/10
Customary of any Etrian Odyssey games, the main point of this game is the dungeon crawling and mapping your own map. There are more than 20 floors to traverse and map, and each map consists of FOE (ala mini-boss) that will serve as a puzzle element to that specific floor. It is usually difficult to beat the FOEs when you first reached a certain floor, and you will have to find ways to avoid or even sabotage the FOEs. At times it will be frustrating if you accidentally encounter the FOE as you try to solve the puzzle, but yet it feels rewarding if you were able to avoid them and reach the next floor, which you will have to solve another set of FOE-filled puzzles again. 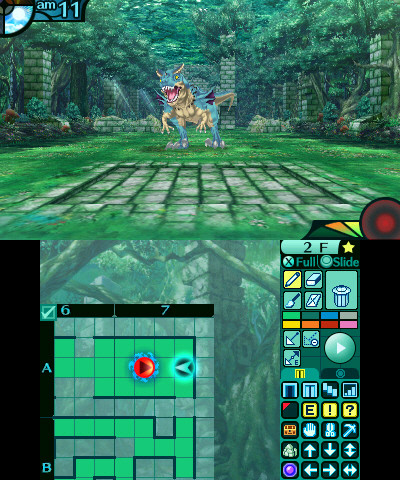 Map your way around the dungeon while avoiding the T-Rex!

As mentioned earlier, if you play the Classic Mode, you will be able to choose and customize your own party to tackle the labyrinth. However in Story Mode, the characters with their respective jobs have been chosen for you and you will only be able to use those jobs until you’ve reached a certain level that allows you to change your job. Contrary to most traditional RPGs, all the skills that you can learn will be shown to you immediately and you can plan and strategize according to your playstyle. In addition, the Grimoire Stone system is introduce in this game where you can equip up to five Grimoire stones per character that will grant you the ability to use other job’s active and passive skills. And if you decided to equip the Grimoire stones that has the same skill as the character that has learned it, it will further raise the skill’s level up to a maximum of level 20, which skills could only regularly level up to a maximum of level 10. Lastly, each character has a ‘limit break bar’ called it the ‘Force Gauge’, which if filled up, you can used it and it will heighten your skills. If you decided to use ‘Force Break’, which renders the Force Gauge to be useless temporarily till you rest back at the inn, it acts as a super skill to help you out at certain tough spots such as granting you full invincibility for the party or allows you to attack twice per turn etc. 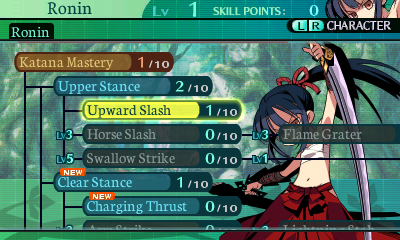 It’s a good idea to plan ahead first so you won’t regret your wrong choices down the road! 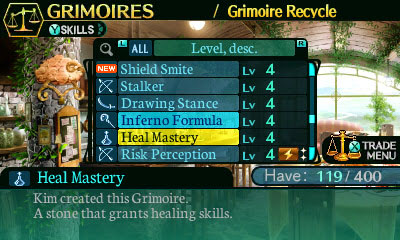 Do you always want your Samurai to use a gun! Now you can do so for free with our newly developed technology the Grimoire Stone!

Lastly, there is a restaurant that allows you to develop and prepare dishes that will grant you special status such as increase health or higher resistance to sleep etc. With the ingredients that you’ve collected from defeating monsters or collecting from harvest point, you can use them to prepare food that allows you to advertise and sell it to your local population, acting as a side-business next to your adventuring. 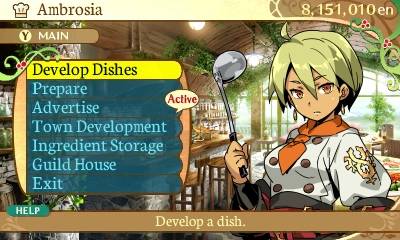 Not only are you killing your enemies, you also DEVOUR them! Yes, embrace your dark side!

Playing on Standard difficulty mode, I personally felt that the game has a normal pacing during the early stages of the game. However, during the mid-portion of the game, the difficulty suddenly increase and there are many times that you can’t help but feel that the boss are unfair and cheating. To combat this difficulty, you might have to spend some time to grind your levels higher so that you will be able to easily tackle the boss and also the normal enemies, especially towards the end of the game. 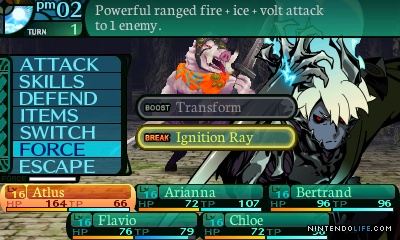 Sound/Music: 6/10
Music for most of the part is soothing and pleasing, but yet unfortunately not too memorable. For each Stratum (or different location/section), the music is chosen appropriately for the scenery such as the snow-filled stratum or even a Japanese Cherry Blossom-filled area. In addition to this, the battle theme is also different for each Stratum that you’re traversing, making it not a snooze-fest to hear the same battle theme over and over again for the 30 hours that you’re playing. Lastly, I would like to mention that when your main character transforms, the battle theme is so badass! It makes me feel that my character is actually overpower so much that I can simply destroy all my enemies! Still, since there aren’t any epic adventures in this game, so you don’t really get to hear any epic music much. 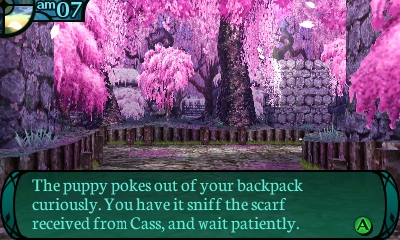 Maybe if they played vocal tracks while exploring this area, it will make this game 1000x more awesome!

Graphics: 7/10
Graphics for the most part are decent, nothing too amazing. You will see vibrant colours of green, pink, white and others which nicely reflects the scenery for each Stratum. Character portraits are nicely drawn too, with different facial expressions depicted for each characters.

Delightfully, there are no re-skin of enemies and you are guarantee to encounter different enemy designs for reach floor. For example, in the first Stratum, which is a woodland area, you will mostly encounter insects, bears, etc whereas in the third Stratum, a snow area, you will face a lot of fishes and snow creatures. 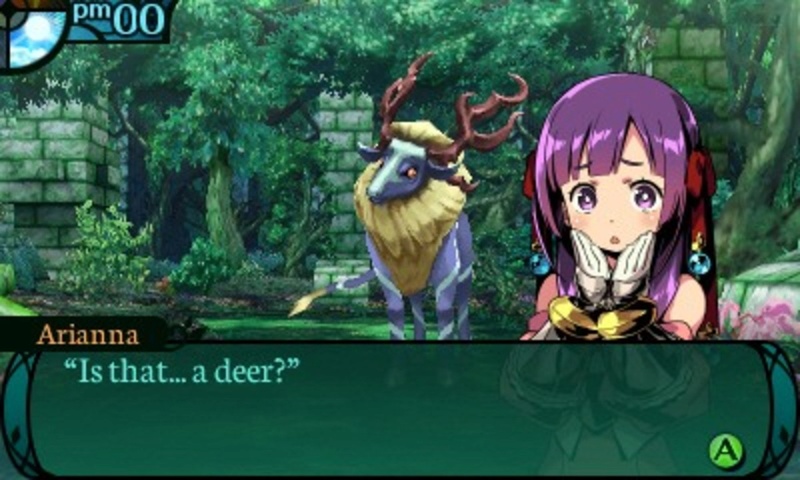 I hope PETA doesn’t catch me for trying to kill this endangered deer and eat its meat!

Final Score: 7/10
It really saddens me because it did not really leave a deep impression for me, unlike the first game Etrian Odyssey Untold: Millennium Girl. There are some puzzle elements which frustrates me a little (or maybe I’m terrible with it?) and a few of the Stratum bosses are so annoyingly difficult that I simply want to smash my New 3DS onto the ground. It certainly doesn’t help the case when towards the end of the game the normal enemies have a ton of HP and hits a ton too!

Thankfully, there is a ‘Jump Floor’ system that allows you to easily travel back to your home to recover your health, making the game more bearable. Overall, I enjoyed my experience with this game, but not enjoyable enough for me to crave more.


Will I replay the game for a second time?
This is a tough question. At this current moment, I would have to say no. The Etrian Odyssey games offer pretty much the same experience for all of them and why replay this again when you can play a better developed game in the series? Story is a bit lackluster than Etrian Odyssey Untold: Millennium Girl, although the Grimoire system is much better than it. Still, I would rather choose to replay the other good Etrian Odyssey game, or Persona Q. I still think Persona Q is a better “Etrian Odyssey” game than most of them, unless there’s a better Etrian Odyssey game coming out in the future.

Re: Review: Etrian Odyssey 2 Untold: The Fafnir Knight (3DS Retail)
on November 1st 2017, 12:46 amTowafan7
Message reputation : 100% (1 vote)
Great review! I currently have Etrian Odyssey 3, 4, and Untold: The Millenial Girl. I might get this and 5 eventually, but for now I'm good. Thanks again for reviewing this @ryoutak.

Quote from Review:
I’ve always told you not to bother the chicken too much in Zelda games. Now their boss is back to make you pay back for what you did to them!

The fact that the dungeon in the game has multiple themed floors, each with its own environment, reminds me of Aincrad from SAO. It's probably entirely different in concept, though...

Re: Review: Etrian Odyssey 2 Untold: The Fafnir Knight (3DS Retail)
on November 4th 2017, 1:00 pmSuperVash
Message reputation : 100% (1 vote)
Great review. I disagree that all Etrian Odyssey games are the same though. There are a ton of differences with each new game in the series.