Genre: Platformer
ROVING ROGUE is a new 16-bit style 2D-platformer and the second game from Spanish game developer PadaOne Games. A fastpaced teleport mechanic and a backwards told amnesiac story are the standout features in this title, wrapped up by a fun 4-player mode. 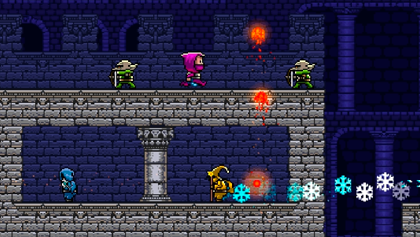 The first of over 40 stages starts out like a tutorial, introducing you with your only combat move, backstabbing, by simply walking into the "final boss" from behind. The credits roll (haha) and then you need to make your way up to the exit on the top of the stage. Simple jumping isn't enough to get out, so your little rogue learns the ability to teleport. You can teleport in all 8 compass directions. If you just tap the button it's a short range teleport and if you hold the button its a long range range teleport. You also need it to teleport through shiny golden walls, as any other wall doesn't let you warp through. It takes a bit to get used to, but when you get familiar with it it's very pleasant being able to get through the stages superfast and with relative ease.

The game has an arcadey feel to it, and with having only upscrolling stages to escape on the top and sidescrolling stages to escape to the right it's got a little touch of NES classic Kid Icarus. Apart from getting to the exit you can collect 3 statues on your way. Collecting every statue in one stage reveals a few sentences in a book you can read in the level select screen. As you progress from Chapter 6 to Chapter 1 of course you also read the diary backwards. As soon as stage 2 lava rises slowly from below, making gameplay frantic too. In the sidescrolling stages, devastating falling rocks approach from the left. Enemies like archers, wizards, and knights have all their own attacks and try to get you when they see you. Checkpoint flagpoles throughout every stage and an automatic save system after every stage help greatly making steady progress, even through difficult objectives. 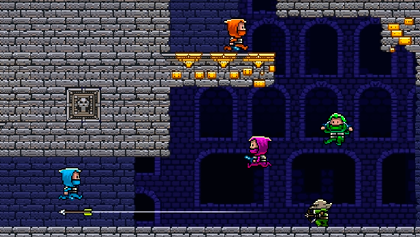 While the gameplay is great for the most part, there is a number of technical issues. The presentation could be more polished. It's annoying how the title screen, loading screen, and level select screen all share the same music. You hear the track looping 3 times before getting into action. Then, when playing, there's a short delay in the framerate for the first time a new animation is loaded. It happens at the beginning of every stage, but then runs fine. However, a Wii U game with 16-bit graphics shouldn't be plagued by such an irritating flaw. The linear level design is engaging, even though a few sections seem impossible at first. The platforming never gets overly difficult and is pretty generous with checkpoints and unlimited lives. Roving Rogue demands and rewards good reflexes, timing and fast thinking.

The variety of challenges is enjoyable, with easy combat, exciting oldschool platforming, and nice puzzles. You can replay all stages by selecting them in the world map, so you can collect the trickier memory statues you missed the first time. Fortunately you don't have to collect them all in one go. Gameplay-wise it stays being a platformer and despite its medieval atmosphere never gets into action-adventure mode like Shovel Knight. The story is told by Twitter-like satire at the start of every stage. But the real story, the truth, is in the memories you have to assemble for the empty diary. It also needs to be completed to see the true ending that reveals a huge twist at the end. 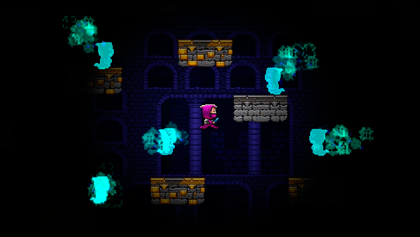 In multiplayer (with up to 4 players at the same time) you can decide if you want to play cooperatively or competitively. All story elements are cut, so there's no need to collect the statues, even though they grant you extra points. You also get points for defeating enemies, reaching the exit first, and you get minus points for dying. A list at the end of a stage ranks the players by score. Also, as long as one player is alive, dead players turn into floating ghosts and can resurrect themselves by touching a living player. Other than that it's the same as the single player.
It is very fun if you're into 80ies/90ies retro games and load it up for multiplayer party sessions.

Finally, I want to note that I experienced a huge bug that deleted both save files. Fortunately, it was after getting 100% in Single Player Mode, but when I wanted to continue my progress in Multi Player Mode with a friend all Roving Rogue game data was gone. It deleted itself randomly and I had to start over. I'd really like to know if this was a one-timer or if others have experienced the same bug. It's the first time I had this happen to a Wii U game. So rather than lowering its score, let us know if you had the same thing happen to you. Then we send our list of problems to PadaOne and hope they love Roving Rogue enough to fix everything and update the game. On top of that, if they even give us more stages then I'll update the review and rise our score as well.

Re: Review: Roving Rogue (Wii U eShop)
on July 21st 2015, 7:15 pmTowafan7
Thanks for continuing to publish excellent reviews for our website @SKTTR!

Re: Review: Roving Rogue (Wii U eShop)
on July 27th 2015, 12:29 pmFM_Alchemist
Great review!
Permissions in this forum:
You cannot reply to topics in this forum