Message reputation : 100% (10 votes)
“These are the voyages of the starship UExplore SmallCraft™…” 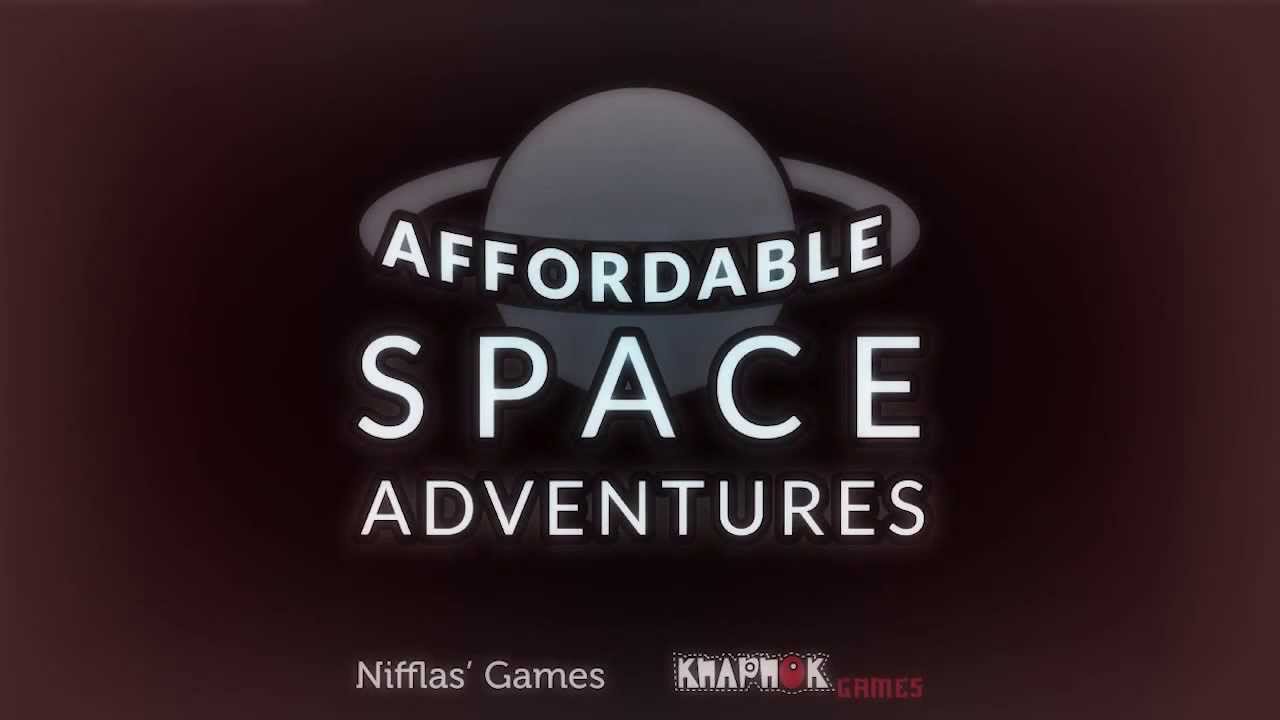 You are the typical urban cubicle-dwelling salaryman attending yet another 9 a.m. meeting when the boss utters those dreaded words: you’re going on a team-building retreat. But, you say, there’s a better way. Instead of spending nine hours doing trust falls with “Sweaty Greg” and balancing on a wire three inches from “Egg Salad Joe,” this time you three can sit a respectable distance from one another on a couch and play a video game instead. This make-believe scenario is not the world of Affordable Space Adventures. No, it is the real world*, thanks to Affordable Space Adventures.

Way back in the year 2012, when the Wii U was still being heralded as Nintendo hardcore savior, much was being made of the system’s tablet-like controller and the “asynchronous multiplayer” possibilities it opened up. Early titles like Nintendo Land and ZombiU would go on to play with these ideas and offer experiences unique to the system, but it wouldn’t take long for fans to notice that most second screen applications were limited to a simple map or inventory display, if anything at all, and multiplayer modes most often treated the Gamepad as just another Pro Controller. It’s clear that co-developers Nifflas and KnapNok have felt this absence, as they’ve now brought Wii U gamers Affordable Space Adventures, a rare third-party exclusive and a chance to experience perhaps the best display of “asynchronous multiplayer” we’ll see in the console’s lifetime.

Before we get too deep into it, let’s be clear. Affordable Space Adventures is a multiplayer game and we will be largely addressing it as such. There is a single player component that has all the same content of the multiplayer one, but when you’ve seen all the game has to offer, it’s clear that the single player game is a side dish to the multiplayer’s meat. Every inch of this game was built with cooperation in focus, so while we will recommend Affordable Space Adventures to anyone, those who play should make the gathering of friends a priority. After all, who wants to explore the uncharted regions of space alone?

Who knew it takes so much work to fly a spacecraft? As this shows only the engineer's role, it's clear that dividing responsibilities among two or three players goes a long way toward making space travel more manageable, memorable, and enjoyable. We can't all be Samus Aran, after all.

Each player has separate controls and responsibilities that each form an essential element of your survival. In three player mode, the pilot is uses a Pro or Classic Controller to control the ship’s vertical and lateral movement, speed, and blast the horn; the science officer uses the Wii Remote and Nunchuck to control the ship’s flashlight, scanner and flares; and the engineer uses the Gamepad to control the various knobs and switches that affect the ship’s engines, electricity, noise production and more. From the beginning, all three of these functions will be essential in navigating the environment and the balance of responsibilities is perfect. This is the clearest indication that Affordable Space Adventures is meant to be played with at least two people. The game is certainly playable on your own, but the sheer number of systems in play on any given stage will leave most player’s brains and fingers in a knot. Having fellow crew members on board your ship allows the team to divvy up tasks and share the load adding a sense of difficulty in coordinating actions and timing, but relieving much of the stress of flying solo. The “tourist” difficulty alleviates some of the complexity and we recommend it for first time single players, but discovering the world with one or two others by your side makes for a much more memorable adventure.

Affordable Space Adventures’s has a simple goal told simply. In the form of a preflight safety video, you are made aware that you and your co-passengers have embarked on an exploratory excursion to a beautiful and peaceful alien world courtesy of a new affordable spacepod, the UExplore SmallCraft™. The ship is only large enough to support three passengers: a pilot, an engineer, and a science officer. You are shown images of a stunning landscape that is yours to freely explore until the large transport craft returns to pick you up. As you can imagine, all is not quite as utopian as it first appears, but from this point on, it is up to the player to figure things out.

Throughout the game, your crew will have to navigate devious traps and environmental hazards with solutions you devise yourself. The developers won't tell you how to get past this deadly blockade, so neither will we.

After a crash landing, many of your ship’s features will be offline until the automatic repair functions have completed. These repairs happen at specific progress points in the game, allowing time for players to learn the ins and outs of each ability before more are introduced. The functions are each accompanied by a short message stating the use of the new tool, but players are given no further hints. It sets the tone for a harsh world in which your crew is truly on its own to survive, using only your wits and unimpressive little ship. This is one of the game’s biggest strengths. Because there is no hand-holding or forced tutorial segments every achievement as small as flying through a hole or drastic as narrowly escaping the clutches of an enormous hungry beast comes about by teamwork and player ingenuity. The level design will gently ease players into familiarity with the ship’s physics and functions, but as soon as you understand how to control your SmallCraft™ you’re thrown a curve and forced to figure out how to combine various skills and player responsibilities to progress. There’s a joy of discovery in the puzzles that is sure to force regular breaks from the action to complete a round of high fives and back slaps. Even failure won’t keep your crew from pressing on as most errors won’t place the ship too far behind. Occasionally a misstep will destroy the ship and require restarting at a recent (and frequent) checkpoint), but more often you’ll find the ship has simply shut down, requiring only a restart before you take another shot at getting past that tricky corridor.

These puzzles are the meat of the game. There are small Metroid-esque exploration elements in play, but rather than a cohesive, labyrinthine map, you’ll pilot your ship through a multitude of separate areas with changing themes and obstacles requiring ever changing tactics. The game isn’t terribly long (a first time playthrough will last about six hours), but by only the halfway point your crew will be devising and executing strategies like a professional space team, switching landing gears, firing flares, dropping engine power, and dodging hazards with precision and poise enough to make you and your friends briefly consider taking a shot at Olympic bobsledding next. There are almost always multiple ways to advance past a particularly tricky spot, which keeps everyone on the team contributing ideas on how to move forward. Affordable Space Adventures is a team sport that leaves no explorer behind, making progress a matter of improving not only one’s understanding of the game mechanics but also invaluable real-world teamwork and communication skills, making each puzzle solved a victory that actually matters. It’s much more than saving a fictional world from a fictional threat and receiving a fiction princess’s fictional kiss in return. It’s an impactful, developmental journey that rewards its players with permanent skills and that’s not something that can truthfully be said of most games.

As you and your team work to survive on this strange world, you'll be frequently rewarded with some stunning landscapes and moving artistry. Why does someplace so pretty have to be so dangerous?

Besides the masterful balance of multiplayer roles and ingenious puzzle design, the games other major selling point is the atmospheric presentation. Story is not something the developers meant to be a focus, as there is hardly any conventional story to speak of. Instead, the game’s story, like its rewards, takes place inside the living room, the only narrative being the difficulties your crew faces and the conversations that finally lead to victory. Instead, Affordable Space Adventures spends its world-building efforts in the name of atmosphere. The game is graphically gorgeous and the planet’s varying areas are unfamiliar, unearthly, and unsettling, while still beautiful and intriguing. There’s a constant sense of danger that will keep you flying slowly, scanning the entire area even when you can see no actual threat while dynamic lighting effects and moody “music” that is largely composed of environmental and mechanical sounds further immerse players into the strangeness of the situation. Once the adventure ends, your crew will feel as if you had literally explored an alien planet and emerged on the other side. So satisfying is the finished adventure, in fact, that our only complaint—we simply want more—is no complaint at all, but a commendation to the developers. We would love to see DLC added to the game or a sequel that somehow expands the ideas present, but we have no suggestions as to how. Affordable Space Adventures may not be a 40-hour RPG, or even as long as a couple other games of similar price on the eShop, but it is absolutely complete and reminded us of just how much potential Wii U developers have been missing in recent years.

Bottom Line:
Affordable Space Adventures is a beautiful, puzzling, cooperative journey that pays dividends in real-world skills and emotion along the way. This is a game that will not only define “asynchronous multiplayer,” but co-op gameplay for years to come. Though every nut and bolt of the SmallCraft™ was built with multiplayer in mind, even those who can’t find anyone to join their expedition owe it to themselves to explore the game, if only on the simpler difficulty first. But no matter how many partners you can find, this is one space adventure you can’t afford to miss.

*Maybe. Boss who approves of playing video games on company time not included with most careers. Cross your fingers and check your local supervisor’s office for details.

Re: Review: Affordable Space Adventures (Wii U eShop)
on May 29th 2015, 6:13 ambro2dragons
Message reputation : 100% (1 vote)
Thanks, @Rukiafan! I really can't recommend this game enough. Zero performance issues, wonderful design and universally accessible. You can have as much fun playing with your grandmother as you can with your six year old (although, I would probably give them the Science Officer position as it's just a little simpler than the others). And when all's said and done, the entire experience feels like it's meant something, which I think is the penultimate compliment and benchmark for a timeless work.

KnapNok and Nifflas poured their heart and soul into this game and they definitely got a little bit of mine in return.

Re: Review: Affordable Space Adventures (Wii U eShop)
on June 1st 2015, 12:28 pmTsubasa
This is an incredible game and this review is equally incredible!

Re: Review: Affordable Space Adventures (Wii U eShop)
on August 4th 2015, 12:11 pmLizofDoom
Message reputation : 100% (1 vote)
@bro2dragons you are without a doubt the best reviewer on this site since @Jnes5! What happened to @Jnes5 anyway?

Re: Review: Affordable Space Adventures (Wii U eShop)
on August 4th 2015, 6:45 pmTowafan7
@bro2dragons you seem to be pretty popular around here! Congrats.

Re: Review: Affordable Space Adventures (Wii U eShop)
on August 4th 2015, 9:16 pmKain
When is the free dlc going to release for the game?

Re: Review: Affordable Space Adventures (Wii U eShop)
on November 13th 2015, 5:10 pmRWBY Yellow = Yang
This game is much better than Nifflas' previous Wii U game!