With three hours of Splatoon’s territorial ink splatting under our belts, it’s no understatement to say: we just can’t wait to turn in to a squid and dive back in.

Nintendo’s upcoming third-person shooter has been described as the Wii U’s answer to Call of Duty, Halo, and Gears of War, but, while it may fill a similar competitive online shooting role, there are no accurate gameplay comparisons to make. Splatoon eschews both the speed of popular military FPS games, as well as the deliberate duck-and-cover gameplay of common third-person run ’n’ guns, giving the game a feel all its own. Because the object of the game is to cover as much ground in ink as possible within the time limit, and not to simply kill all the enemy players, Splatoon strikes a unique balance between focusing on the map and focusing on the opposing team. This leads to one of the game's most striking elements and it's visible from the moment players jump into their first match. There are countless ways to play Splatoon.

The level maps feature multiple paths with a mix of open spaces and corridors, towers and flats. This one, Saltspray Rig, is the more complex of the two offered in the Testfire Demo, and features winding paths to a hotly contested open area.
Some prefer to spend their time shooting ink at enemy combatants. After all, when an enemy is “splatted,” they become a human bomb and cover the nearby space in your team’s ink. It also keeps them from spreading more of their ink for several seconds and halts their forward progress which can be critical in such a time-based game about controlling land. Other players, however (particularly those who prefer close-range weapons), would rather spend their energy avoiding the front lines and coating forgotten areas along the corners of the map to slowly increase their team’s percentage counter. Some like to press forward into the enemy camp or be at the very edge of hotly disputed territory, while others wish to claim high spots and snipe their enemies (and spots of enemy ink) from a safe distance, while still others play a stealthy hit-and-run game by hiding in their own ink before popping out and splatting an enemy from behind. The best players tend to combine elements of a few strategies and are able to change tactics on the fly to adjust to an ever-changing battlefield. And at all times, a death is only a temporary setback. Though it does give your foes several precious seconds of advantage, the quick-moving squid form and ability to effectively teleport to a teammate’s location means you’re never far from getting back into the action. It’s a rare game that makes so many wildly differing play styles viable, but Splatoon’s concept balances these options with practiced mastery. Each of these methods bring similar levels of help to your team so random matchmaking means every battle plays out differently, keeping the strategy fresh. It’s how well players of varying strategy come together as a team that determines victory or failure. Too many up-close ink-rollers without supporting fire and the team will have trouble getting close to guarded enemy territory. Too many lone wolves conquering unseen corners of the map and your foes will easily claim a majority of the space by covering the middle ground unopposed. Likewise a team who spends all its efforts pushing into opposing lands may suddenly find their own base coated in a thick layer of foreign ink.

These checks and balances extend to the weapons, as well. The Global Testfire Demo only allows players to choose from four weapons, each with a preset sub-weapon and super weapon. On display this weekend: the Splattershot, Splatoon’s basic “assault rifle” class with medium range and a fast firing rate; the Splattershot Jr., a quick-reloading, short-range, rapid fire sub-machine gun; the Splat Roller, a giant paint roller with limited spraying capability and slow reload, but unique aptitude for covering large swaths of ground very quickly; and the Splat Charger, a sniper rifle-type weapon that is able to strike targets over a large distance after briefly building pressure. Sub-weapons, meanwhile, are pretty standard fare: ink grenades that explode after a short period, ink bags that explode on contact, and sticky ink bombs on a timer that are handy for setting traps. The super weapons are where tides can really turn in a team’s favor. After covering enough ground with ink, a meter fills enabling you to fire a super weapon any time with a press of the right control stick. These can range from a spherical shield to rapid-fire bombs to a directionally fired screaming vortex of inky destruction fittingly called The Killer Wail. Unlike main weapons and sub-weapons, these super weapons do not use ink, so they can be deployed even after you’ve exhausted a full tank. 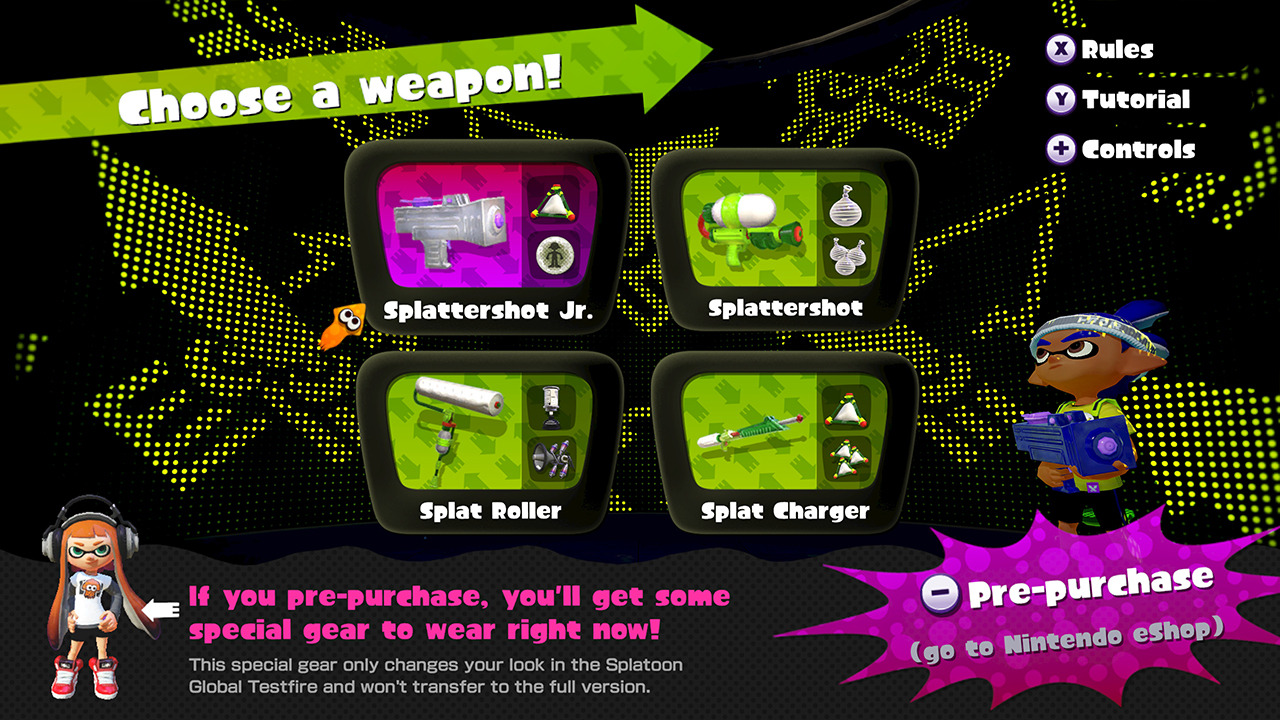 The demo offers only these four loadouts, but the full game promises many more customization options.

Graphically, the game is colorful and vivid, with the urban landscapes providing plenty of detail that most players will never have time to stop and notice. One small complaint is that it’s not always clear which walls can be inked and which cannot, but it’s an insignificant issue since players will not only quickly learn the maps, but the game’s frantic pace will keep most from spending too long trying to pour ink on a wall that just isn’t taking it. The music, while limited, is a good fit for the title, setting the mood for a frenetic battle, but never diverting your attention away from the scene. Nintendo hasn’t made any announcements about the amount of in-game music, but we would expect to hear more tracks in the final version of the game, as well. It is also unclear how customizable the final product’s controls are, but from what we’ve played they don’t need much tweaking. The demo allows players to begin a matcha fter a short tutorial segment, which is necessary, but brief. The combination of motion and twin stick controls takes a moment to get used to, but only a moment, and the test area does a good job of getting players quickly acquainted with the basic maneuvers. A press of the Gamepad’s + button (yes, the Gamepad is absolutely required for this game) at the weapon select screen then allows players to invert the X and Y axes, tweak the camera sensitivity and, most importantly, turn off motion controls. That’s not to say the motion controls don’t work. In fact, they are the most accurate way to quickly aim your ink shots after using the right stick to ensure your character is facing the correct direction. We know, however, that motion controls are a sticking point for many players, particularly those fond of more “hardcore” genres like competitive shooters, so it’s a very welcome inclusion and just another option that makes Splatoon accessible to players of all skills and preference.

With no time in the single player campaign or local multiplayer score-attack mode, no chance to explore the game’s city hub or try out its amiibo missions, and with only two stages and four weapons to use, we’ve admittedly seen very little of Splatoon so far. But what we have seen is nigh on perfection. The game is (so far) intricately balanced and the online multiplayer is inclusive and engaging, while remaining always competitive and tense. If you missed the Global Testfire Demo's three short chances to check out the game, fear not. The game’s May 29 launch date is just around the corner and if the development team has extended the same quality apparent in the demo to the full retail release, it will be a title well worth wrapping your tentacles around.

Re: First Impressions: Splatoon
May 9th 2015, 3:58 pmTowafan7
I don't think that this'll be a day one purchase for me, but I'm definitely interested in the game! @Bro2dragons if you get this game on launch I'd like you to review it. If you don't have plans of purchasing the game when it launches don't feel pressured to do so.