Nintendo’s latest attempt to utilize its line of NFC figures, “amiibo Tap: Nintendo’s Greatest Bits,” is difficult to review as a game. Moreover, it’s difficult to really consider amiibo Tap a game as we tend to think of them. There are no objectives to be completed, nothing is unlocked or gained, nothing is learned, and there is no “winning” or “losing.” So what new value does it add to those plastic Smash Bros. characters? For most gamers: none. But that may not have been what Nintendo wanted to accomplish with this free software.

When Nintendo showed amiibo Tap in a Nintendo Direct earlier this spring, there was plenty of confusion surrounding how the title would work. Would unlocked games be based on the franchise tapped amiibo represent? Would it overwrite Super Smash Bros. or Mario Party save data? Would the games include challenges ala NES Remix? The simple answer to all of the above is, “no.” After downloading the app, players are prompted to tap an amiibo to the Wii U Gamepad. Don’t have an amiibo? Your fun is already over. If you do have one, though, a quick touch of the figure’s base brings one shiny new game to play assigned at random from one of 30 Nintendo-developed NES or Super NES games. This game is saved to the app and locked to the figure, so while it doesn’t require you to delete your battle-hardened Smash Bros. Figure Player, it does mean you can’t change the game you get if you don’t like it.

The games assigned stick with the amiibo used, but they are completely random. This reviewer's Samus amiibo, for example, unlocked sections of NES puzzler Yoshi, while a Yoshi amiibo unlocked The Legend of Zelda: A Link to the Past.
This is an issue that would be understandable, however, if the games your amiibo unlocked were actually games. Instead, however, what you get is a collection of up to nine three-minute “scenes” taken from the game it represents. And these “scenes” are exactly that: sections of games. The data is not altered in any way to present a new twist on Excitebike or Super Metroid. World 1-1 of Super Mario Bros. doesn’t record your time for completing the level. Each tap of that game’s amiibo simply drops the player into a different predetermined spot in the game without any explanation, incentive, or goals. The presentation is overall clean and unobtrusive, but there's nothing flashy. The games on offer are exact ROMs with the same graphics and sound that you've experienced on the carts and Virtual Console for years.

Every game unlocked includes a link to that game’s eShop page next to the three-minute timer, so it’s clear Nintendo’s goal with amiibo Tap is to introduce new gamers to classic titles with these timed demos, in the hopes they then go buy the full game. Not only, however, is this a redundant tactic, since Super Smash Bros. for Wii U has demos of most of the same games with similar time restrictions, but it’s an ineffective demo method, as the player is given a taste of the game without context, without purpose, and with spoilers. A person who’s never played Donkey Kong may see the game as a standard platformer, since they’re not given long enough to realize it’s about the score, rather than the destination. A person who’s never played the original Zelda won’t know there’s any order to the dungeons, or know that there’s more to do than just wander around woods and valleys, but they will know where the secret warp rooms are, how to find secret moblin caves, and how to beat late-game bosses. The demo isn’t likely to drive many players to go purchase the full game, but it could very well sour the new generation on some of gaming’s foundational titles. 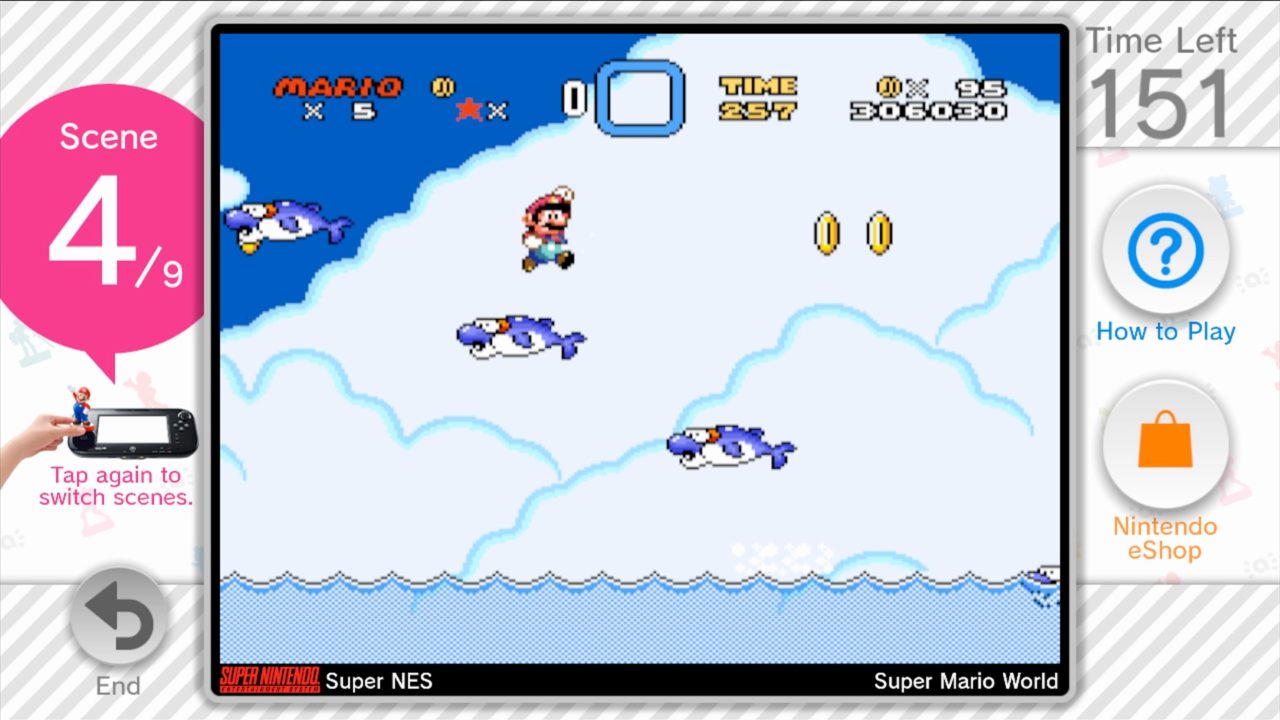 The large timer and eShop icons are always there to remind players that the $13 they spent on that amiibo figure only buys them less than 30 minutes of a game.
That’s not to say amiibo Tap isn’t without its positives and in about three hours with the game (about two and a half hours longer than we recommend any non-reviewer spend with the app), this reviewer was able to come up with two. First, the demo system allowed a noobish gamer like myself to defeat Metroid’s Kraid, Ridley, and Mother Brain for the first time. Those players who have tried some Nintendo classics before, but run into skill barriers that prevented further progression may enjoy the ability to skip to some of the games’ final stages. Second, amiibo Tap’s three-minute demos are more than long enough to prevent young, naïve gamers from spending any real money on the likes of Donkey Kong Jr., Pinball, or Clu Clu Land. Those unlucky enough to randomly draw such games with their figures should consider amiibo Tap a friendly PSA from Nintendo and continue on their way.

Amiibo Tap: Nintendo’s Greatest Bits shows a company that knows it’s sitting on an NFC and Virtual Console goldmine, but is running out of ideas on how to use both. The app acts as a sales pitch for games you can download from the eShop, but it serves only a small—and shrinking—audience of gamers who own a Wii U and multiple amiibo, but haven’t played history’s most famous Nintendo games. This is an app we could heartily support if it offered free unlocks of real, full games as rewards for buying amiibo. While it’s not the dedicated “Nintendolanders/Nintendo Infinity” game many have been clamoring for, it would certainly add strong value to an amiibo purchase. As it is, however, the game feels like a slap in the face to loyal fans, asking that they buy $13 toys for a 1-in-30 chance to pay $8 for a 20-year-old game. It’s clear that amiibo Tap’s target demographic is small and most of our readers won’t fit the bill. But the app is an ineffective way to reach that audience, and almost insulting to the rest of us. When you feel the need to play just a piece of a classic game, please, we beg you, boot up NES Remix 2, instead.

Re: Review: amiibo Tap: Nintendo's Greatest Bits (Wii U eShop)
on May 6th 2015, 7:51 pmStaroceancrazy
This app is pointless

Re: Review: amiibo Tap: Nintendo's Greatest Bits (Wii U eShop)
on May 6th 2015, 7:57 pmbro2dragons
@Rukiafan It is, which is very sad. They didn't have to do anything groundbreaking, but as I said in the review, it feels like they wanted to give fans a game as a thank you for buying amiibo, but cheaped out and flaked when it came down to it. Having a full, free copy of these games, would have been a great reward, really simple, and lost Nintendo virtually no money in the long run, but as @Staroceancrazy said, instead, it is just pointless.

Re: Review: amiibo Tap: Nintendo's Greatest Bits (Wii U eShop)
on May 7th 2015, 6:33 pmLonelyGamerJack
I see this as a testing ground and showcase of games for people to try out, which could lead to an eventual purchase if they like the sample enough.

Re: Review: amiibo Tap: Nintendo's Greatest Bits (Wii U eShop)
on May 7th 2015, 6:37 pmbro2dragons
That is precisely what this is. But if it's only a smattering of the most famous games in history, and you can't choose which ones you play, it takes away a lot of the benefits of that idea. :/

Re: Review: amiibo Tap: Nintendo's Greatest Bits (Wii U eShop)
on May 8th 2015, 12:19 pmSplatuna
What a stupid concept. Almost everyone who is a big enough Nintendo fan to have a collection of Amiibo would already have most if not all of these games already which makes this app a moo point. Yes I left a reference to Friends so sue me.

Re: Review: amiibo Tap: Nintendo's Greatest Bits (Wii U eShop)
Sponsored content
Permissions in this forum:
You cannot reply to topics in this forum