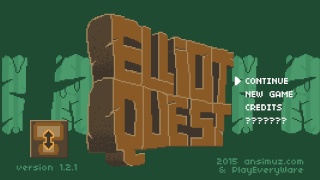 Developed by Ansimuz Games Elliot Quest is a tough as nails platforming RPG in the veins of Zelda II that also has gameplay elements from the NES Kid Icarus title, but do these gameplay elements work well together? Keep reading our review to find out!

The game has platforming elements similar to early platforming RPG's such as Zelda II and blends the two genres together perfectly! The game has towns, fields, and dungeons which are divided into different areas! The fields are essentially the world map and you can go to towns and dungeons from the fields. The towns are where you buy items "crazy idea huh?" opening treasure chests in town also negatively affects your character's personality. Dungeons are where you find many of your important tools and magic needed to progress in the game and boy are these areas difficult!

The enemies and bosses are quite unique and the bosses in particular can by exceptionally challenging!

While the game never reaches Zelda II difficulty levels it is definitely challenging and will test your skills. There are several game-breaking bugs as a result of a recent patch that have made the game nearly impossible to beat which utterly destroys the game's review score. Once these are fixed we'll adjust our review.

The controls are great and the Off-TV Play is a nice feature that adds alot to the game and the option to use a Wii Classic Controller Pro is also a nice addition to the game!

The graphics in Elliot Quest are very retro and look like a nicely crafted 8-bit era title! The level designs are gorgeous as are the character models! The music is also quite enjoyable and really adds to the game!

With great gameplay and excellent controls Elliot Quest is a fun title for sure and the excellent 8-bit visuals and great music it had the potential to be a top-scoring game, however several recently introduced bugs have essentially broken the game and as a result it's score has dropped by 5 points. If the bugs get fixed this game will be superb, but right now we can't recommend this title.

Update: The game-breaking bugs have been fixed and as a result the game has become a highly recommended title in our book. No Wii U owner should pass this great game up!

Ah well, until this one gets fixed I still have to get Affordable Space Adventures anyway.

Too bad for the bugs but the core game does look nice.

I fully agree with your review and score.

@Tech101 wrote:I really want this but on my 3ds. I've seen the dev say they are listening to the people to see if it's a possibility.

Too bad for the bugs but the core game does look nice.

It was awesome before the game-breaking patch came along @Tech101.

Re: Review: Elliot Quest (Wii U eshop) Update!
on May 6th 2015, 4:54 pmTowafan7
@SKTTR and @Tech101 we've updated our review to reflect the fixes the patch has brought to the game!

Thanks for the update!

This game feels like a spiritual successor to Zelda II!

Re: Review: Elliot Quest (Wii U eshop) Update!
Sponsored content
Permissions in this forum:
You cannot reply to topics in this forum