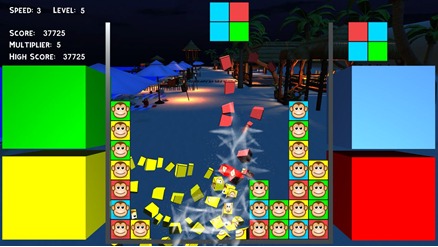 Puzzle Monkeys is a low-priced falling block puzzler with a new touch element. What appears on the outside to be a generic clone of various classics in the genre, like Dr. Mario, Puyo Puyo and Columns, is a puzzler that cleverly combines those mechanics and adds a new touchscreen feature that upgrades the controlability and ultimately the possibility of constructing huge combos a lot easier. If you're familiar with block puzzlers you know that making blocks collapse everywhere so they leave an empty playfield is the most rewarding and satisfying experience you can get from it. If not, let's have a quick roundup: You steer a 2x2 block that is falling from above and rotate it clock- and counterclock-wise. The goal is to break all the monkey blocks and advance to the next level. In Puzzle Monkeys blocks disappear when three of the same color are next to each other either vertically, horizontally, or even diagonally. It's a sweet and easy formula perfect for beginners. And it's made even more accessible with the use of added touch. Once the blocks stack up and reach the top screen it's game over and your score is added to the top 5 local highscore list, and optionally to the online leaderboards. 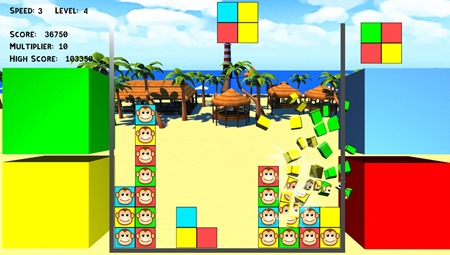 I'd like to start by having an analogy with Tetris. The original Tetris from 1985 didn't show you what the next Tetromino (block) was. This was a feature that has been added with the 1989 Game Boy version. It proved to be a tiny element that added hugely to the controlability. Needless to say it's been part of all Tetris games ever since. Another upgrade happened a decade later in 1999 when The New Tetris on N64 added another feature you wouldn't want to miss in a modern Tetris game: The ability to put a piece on hold and switch to it when needed.

In Puzzle Monkeys this added controlability is made with four huge different colored blocks on the touchscreen.  With a tap on one of these blocks you can destroy one unneeded color, so the hassle with useless colors cluttering up your screen is reduced effectively. What seems like a small thing feels like a little revolution in the controlability of the block puzzle genre, however it looks, like everything in this game, generic and underwhelming. Even huge combos don't feel as rewarding as they can because the animations and sound effects don't work in its favor. Lately I'm playing Pokémon Shuffle, a match-three puzzler that was released around the same time as Puzzle Monkeys. In that game combos have that certain punch: They just look and sound effective and rewarding. That's a definite downside in Puzzle Monkeys, especially considering this is a (2,99€) Wii U game and Pokémon Shuffle is a (free) 3DS game. 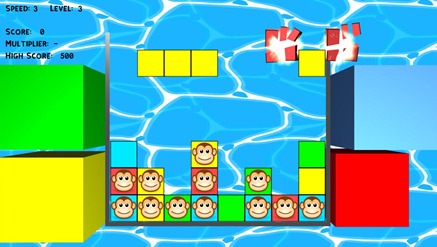 Right from the beginning you have two modes of gameplay, called Mode A and Mode B. Earlier in this review we covered Mode A, so let's check out the totally different touchscreen-only Mode B next. The playing field is smaller now, and blocks don't drop from above, instead they slide in at the top going from right to left. If they reach the left border they all drop down, however you can tap one of the four big block buttons to destroy one color and make the rest of the blocks drop down earlier. Just as in Mode A the goal is to destroy all monkey blocks at the bottom to get to the next level. It's a nice change of pace but doesn't make for more than a little diversity. A great deal of luck is needed later on, and it gets hectic pretty fast.

Both modes can be played in 5 different speed Settings each with its own individual top 5 highscore list and in 9 different difficulty levels: The higher the level the more monkey blocks you have to destroy. You can also select one of 5 backgrounds and one of 3 music tracks to have a little but much needed audiovisual variety. You can also unlock a third mode called Mode A+ which is basically the "endless" level that appears if you beat level 10 in Mode A. In this mode a timer runs down and when it hits zero a line of monkey blocks rises from the bottom, so speed is now required as well. This mode has its own on- and offline leaderboards. Speaking of offline leaderboards, it's unfortunate that you can't write down your name or initials. This is a real flaw as such a simple inclusion would have made this single player experience more appealing for competition with family and friends. The online leaderboards are nice though. Scores can be uploaded and viewed extremely fast.

Puzzle Monkeys is a good game that just looks bland to say the least. It could be more inviting but you get your money's worth. The Off-TV-Play feature makes this perfect for quick pick-up&play sessions and if you like to compete with others online in the block falling puzzle genre then here you get a very affordable game with focus on gameplay instead of graphics. However, the developer is aware of this issue and works on an update to make Puzzle Monkeys visually more appealing.

Re: Review: Puzzle Monkeys (Wii U eShop) (PAL Region)
on March 28th 2015, 12:17 amAqua Cherry Blossom
I completely disagree with the score this game is awful lol.

That said I respect your viewpoint of this game so nice review lol.

Thanks for your opinion. In my reviews I value gameplay (and content) over graphics and presentation. And I thought the core gameplay (of Mode A) was surprisingly deep with several interesting mechanics coming together.

Also, it's a 2.99 game, and the price is always considered in my reviews.
Naturally I am more generous to budget titles that seem to know their own value, and not so generous to games that are shamelessly overpriced.

In the end, a review is about making sure to give the reader the information they need so they can see if the game is right for them.
Personally I'm not that much into scoring games, but that's what most people want (and what's part of this website.)
I just try my best to be fair and objective all things considered.

Re: Review: Puzzle Monkeys (Wii U eShop) (PAL Region)
Sponsored content
Permissions in this forum:
You cannot reply to topics in this forum