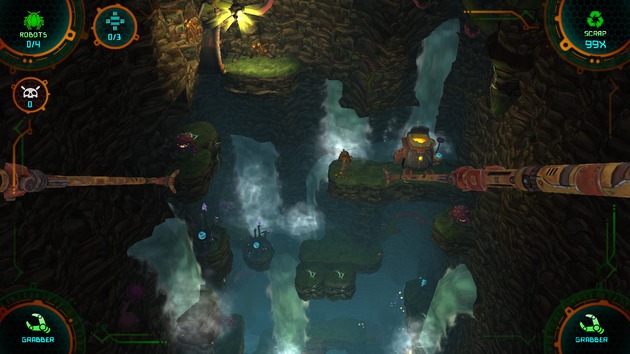 Welcome and take a seat inside this huge floating mech as we dig deep into a new puzzle adventure from Grendel Games. It’s their first Wii U title, although it’s not their first Nintendo game, having developed the arcade action game Diatomic for WiiWare in 2009. Now more than five years later their next game UNDERGROUND is released, a very original and much more advanced and somewhat sophisticated title that was already in development for Wii. It’s compatible with a special controller that utilizes 2 Wiimotes and 2 Nunchuks as it evolved from a laparoscopic operation simulator to a game for all ages that can be used to train that specific kind of surgery. You can switch to this 1:1 control method in the options but the Wii U GamePad is your default and only other control option. For this review we had no access to the special controller and used the Wii U GamePad.

In UNDERGROUND you take control of a robot with two long arms, and you operate from a first person perspective watching down on the stage from a safe distance, flying statically in mid-air. However, there are other smaller robots that you need to rescue and get to each of the 24 different underground caves’ exits. Move both your arms independently with the right and left analog sticks. Each arm has the same three different tools you can select via touchscreen anytime: A grabbing hand to pick things up (and to hold valves and turn them with ZL or ZR), a driller to break stones and other objects, and a welder to melt ice, defeat enemies, and fuse robots so they have a short boost. Bigger stages are parted up in several areas and you can fly to them by pressing the d-pad in that direction. The premise is to avoid traps and remove any obstacles to open up a save path for the robots to walk through. Each stage has a set number of energy crystals for your robots to collect. They provide a neat extra challenge and replay value for completionists.

The game explains its mechanics via text boxes so you always get a few short tutorial-like instructions every time you come across something new. One of the biggest parts of the game is constructing and scaffolding, building bridges, stairs, and elevators. For that there are ovens placed around which can be used to create building materials, but you have to feed it with precious scrap metal that is lying around or must be drilled and pulled out of walls first: a bridge needs one piece of scrap metal, a staircase needs two pieces, and so on. Once you get the hang of it it’s becoming one of the really addicting parts of the game and shows it’s puzzly greatness. 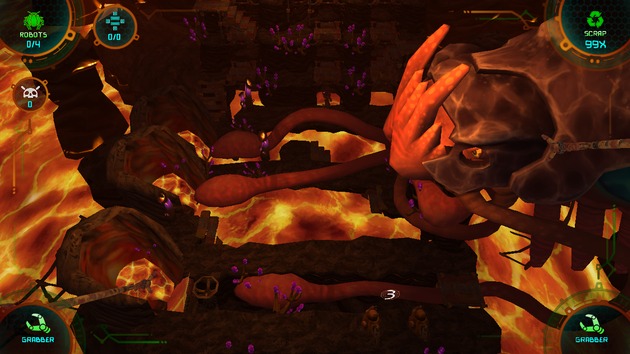 The other great part about this game is its variety: the addition of new elements throughout the entire game. Early on you find a friend, a little girl that needs to be rescued just like the robots. Her special ability is to repair broken robots so she’s getting very useful, and later on you find a new kind of oven that can produce special suits for your robots, so you can turn them into self-defending sentry bots or bridge-repairing maintenance bots. Different kinds of enemies, new building stuctures, and a boss stage every 6 levels round up the package.

But it’s not all without its flaws. The robot AI is one of the two bigger problems in this game. Sometimes your robots just stand around, waiting for an action that triggers their next movement even though the path before them is opened up and free and safe already. It often seems like they’re stuck, but they just won’t move until you do a little bit more. Sometimes you just wish to send them wherever you want, but there’s no option to direct them. There’s rarely going back either so you have to force them artificially by blocking a path with a reversed staircase or something so they start looking for another option. There are wondrous workarounds sometimes but there are also instances where your robots (and girl) can get stuck for real and the only option is to restart the stage, The other problem I found is the control and collision detection in stages with many objects and floors. With the special controller you have real-life motions in 3D and can easily interact with objects in the background, but the two analog sticks of the Wii U GamePad don’t have the same kind of accuracy. There will be situations where you want to build or pick up something that is halfway obscured by an object in the foreground and the game has problems to register. It can get extremely fiddly at times, and at worst it’s simply impossible to do what you want, so you have to abandon that specific item you desperately wanted to get, or destroy a construct you just built, leaving you wishing you had that special controller. There can be frustration but not enough (at least for me) to give up.

Since this was originally developed for Wii you can still see it in the graphics as it looks like an average Wii game pumped up to 720p resolution which isn’t a bad thing for a puzzle game, but not very remarkable for a 3D Wii U title, especially because the framerate is on an average level as well. My favourite aspect about the graphics are the robots that are well-designed, look cute and have funny animations, but it seems like a few animations are missing. A few examples include defeated robots in suits as they appear like just standing around until you remove the suit to “make room” for the dizziness animation, or the lack of animation for turning the valves that makes you feel weirdly disconnected. Also, while it’s nice for this game to have a real-time water/lava engine, watching it move looks appealingly odd. The overall character designs, atmosphere and immersion is quite good though, with ice, lava and water worlds all introducing their own elements and vegetation. The pre-rendered video cutscenes are a nice addition that explain the light story of the game and rise the production value a bit, and the live orchestrated music fits well and doesn’t annoy even though there is just a handful of different tracks. 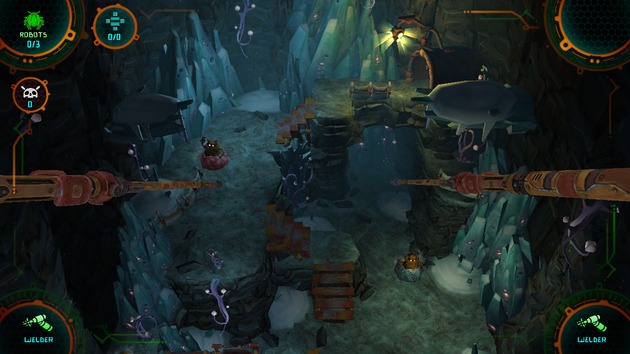 UNDERGROUND doesn’t make much use of the Wii U features. There is no Off-TV-Play and the only thing displayed on the touchscreen are the three different tools you can select. Also, just like with a few games before, posting pictures on Miiverse doesn’t work at the moment. The developers announced an update already, hopefully fixing some of the other issues as well.

I recommend UNDERGROUND for puzzle fans. Obviously it’s an outstanding software for laparoscopic training as well, but not many will have access to that special controller that was made specifically for this game. I think UNDERGROUND would do better if it gets on sale occasionally for the general public, as the 19.99€ premium asking price is only a bargain for the hospitals and universities that make heavy use of this software and the special controller. There’s just 24 levels (an average game length of 15 hours) and unfortunately no bonus for 100% completion. All said and done, in its present state UNDERGROUND gets “only” a solid recommendation. However I’d love to revisit this game after the update to see if they can polish it up because it’s very close to an 8/10.

Edit: The game has been updated. Bugs were fixed and the issue with Miiverse screenshots not working is gone as well. Also, the special controller is now available to order from the Underground website . All this effort is enough reason to give this game the 8/10 now.

Re: Review: UNDERGROUND (Wii U eShop) (PAL Region)
January 23rd 2015, 2:41 pmTalesfanatic
This looks fun!
I hope that this'll be released in NA soon.

Re: Review: UNDERGROUND (Wii U eShop) (PAL Region)
February 11th 2015, 9:21 amSKTTR
Thank you all!
I really enjoyed the game and I hope you get the chance to try it!

Grendel Games released the first UNDERGROUND update already.
The framerate is better now, and they told me they found a bug (I've not encountered) so that's probably fixed.

For my next review I wanna make a test and release it without a rating. What do you think?

Re: Review: UNDERGROUND (Wii U eShop) (PAL Region)
April 3rd 2015, 6:20 pmSKTTR
Grendel Games are still putting resources and updates into their baby.
Things have changed for the better so I've updated the review.

Also, Underground is out in North America now!

Re: Review: UNDERGROUND (Wii U eShop) (PAL Region)
April 5th 2015, 5:57 pmTowafan7
$20 seems a bit steep of a price. I might get it at some point, but it isn't exactly going on my wishlist. Thanks for reviewing this game @SKTTR.