Review: Shantae And The Pirate's Curse (Wii U eshop)

Review: Shantae And The Pirate's Curse (Wii U eshop) 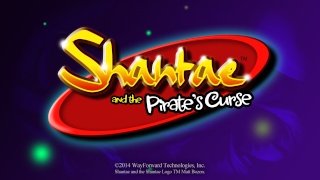 Developed and published by WayForward Shantae And The Pirate's Curse is the final game in the first story arc of the Shantae series and it features streamlined gameplay and more polished mechanics than earlier games in the series, but is it enough to give this game our seal of approval? Keep reading our review to find out!

The story of Shantae And The Pirate's Curse isn't a major part of the game, but the story itself is quite humorous as are the plethora of comical characters that you will run across during your adventure. These elements make for quite an enjoyable experience in this regard, however more importantly the gameplay is highly polished compared to the earlier Shantae titles! The game's world is split amongst 7 different islands each with their own dungeon and pirate tool! Pirate tools that are found in the dungeons can help you reach places and solve puzzles that you can't reach or solve before obtaining the tools! This includes areas in islands that you've already visited so backtracking is a must.

The first island is where you can do all of your shopping to spend your hard earned Rupees which you'll want to do before heading off to a new island. Extra health can be earned by collecting 4 Heart Squids and bringing them to a certain character on a certain island rather than after defeating a boss. These Heart Squids are usually easy to find, but a few are quite cleverly hidden. 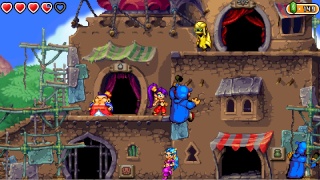 The platforming in the game starts out simple, but becomes increasingly more difficult as the game progresses and the same can be said about the game's puzzles. Some of the puzzles late in the game are quite perplexing to say the least, but aren't unfairly difficult either. The bosses are quite unique and provide a decent challenge. These bosses usually require you to use the pirate tool that you obtained earlier in the dungeon in order to avoid its attacks or in some cases even damage it. The game also has an unlockable game mode for those of you who finish the game which adds to the game's replayability!

The controls in Shantae And The Pirate's Curse are superb and easy to learn. The sheer amount of controller options is a nice feature of the game! The Gamepad is used as a map, inventory screen, etc. when using it as your controller and can also be used for Off-TV-Play which is a much appreciated feature of this game! 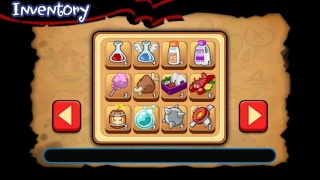 The music in the game is absolutely breathtaking and fits the game remarkably well and the game's sound effects are quite nice as well! The characters are also partially voiced over in a similar fashion to the more recent Zelda titles with a name or single word occasionally being spoken by a character. This is a neat little touch that adds an extra layer of polish to the already excellent audio that this game messages your ears with!

The graphics are decidedly retro and look absolutely amazing. The level of detail for the character models and backgrounds in the game is quite impressive as are the special effects and HD character still images that are shown during cut-scenes! All-in-all Shantae And The Pirate's Curse is flawless in-terms of its audio-visual presentation! 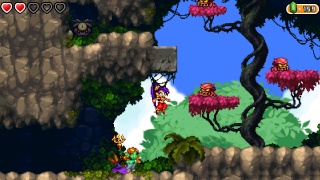 With highly polished and enjoyable gameplay, a humorous story and characters, superb controls, and excellent audio-visual presentation Shantae And The Pirate's Curse is an eshop game that no Wii U or 3DS owner should hesitate downloading! This is one of the best eshop titles released during 2014 and we give this game the highest level of recommendation!

I know it shouldn't matter but the price is scaring me away. I'm sure it's worth every penny but I'm getting to the point where I've got far too much to play and so little time to play it. I can wait for a sale where as maybe 2 years ago I'd already own it. Once or more like if I clear some backlog then I can enjoy some of these newer games again. If not a sale is second best.

This will be a day one download once the game finally releases here in Europe.

Re: Review: Shantae And The Pirate's Curse (Wii U eshop)
on January 5th 2015, 6:14 pmAqua Cherry Blossom
Nice review.
This is a wonderful platformer, but it is a little sexist lol.

@Aqua Cherry Blossom wrote:Nice review.
This is a wonderful platformer, but it is a little sexist lol.

On-Topic: Thanks for your kind words @Tech101.

Re: Review: Shantae And The Pirate's Curse (Wii U eshop)
on January 6th 2015, 10:27 pmGrumblevolcano
Great review @Rukiafan! You have become a full-fledged reviewer over the past few years.

Re: Review: Shantae And The Pirate's Curse (Wii U eshop)
on January 7th 2015, 10:37 pmTowafan7
Thank you for the kind comment @SigourneyBeaver.

Re: Review: Shantae And The Pirate's Curse (Wii U eshop)
on February 22nd 2015, 8:53 pmBlueRangerJack
The only thing that stops me from getting this game is the fact that Risky's Revenge was never released in Australia for DSiWare. If it was, I would snap this up without question.

GamerZack87 wrote:The only thing that stops me from getting this game is the fact that Risky's Revenge was never released in Australia for DSiWare. If it was, I would snap this up without question.

Don't let it stop you. It's the second best indie platformer available for the Wii U. The top-prize goes to Shovel Knight. It's easily AAA quality.

Re: Review: Shantae And The Pirate's Curse (Wii U eshop)
on February 22nd 2015, 9:19 pmBlueRangerJack
The music in Shovel Knight rocks!

So lucky and happy this is on a sale already!!

Reasons for the 8 were minor in hindsight:
I haven't played the other games in the series and missed some references and links to some characters and story. And couldn't enjoy it as much as a longtime fan would. (I still enjoyed it plenty!)
And the German screentext is, in my eyes, ... well, not exactly shoddy, but enough to have made me cringe a little sometimes. I miss the times where you could change the language in the game options instead of changing the whole system language setting. Forced language setting is suoptimal. Every game should at least have the option to turn to its default original language - especially because many translations these days are full of mistakes.
That's a matter on its own though.

But apart from these little imperfections it's still a very charming, colorful, humorous, and polished SNES-style action adventure that is just fun to play! WayForwards first Wii U blockbuster! So my final verdict is 9/10.

Looking forward to the other Shantae game for Wii U.

Re: Review: Shantae And The Pirate's Curse (Wii U eshop)
on March 30th 2015, 12:43 pmToughGamer
Good review. @GamerZack87 just do it.
Permissions in this forum:
You cannot reply to topics in this forum