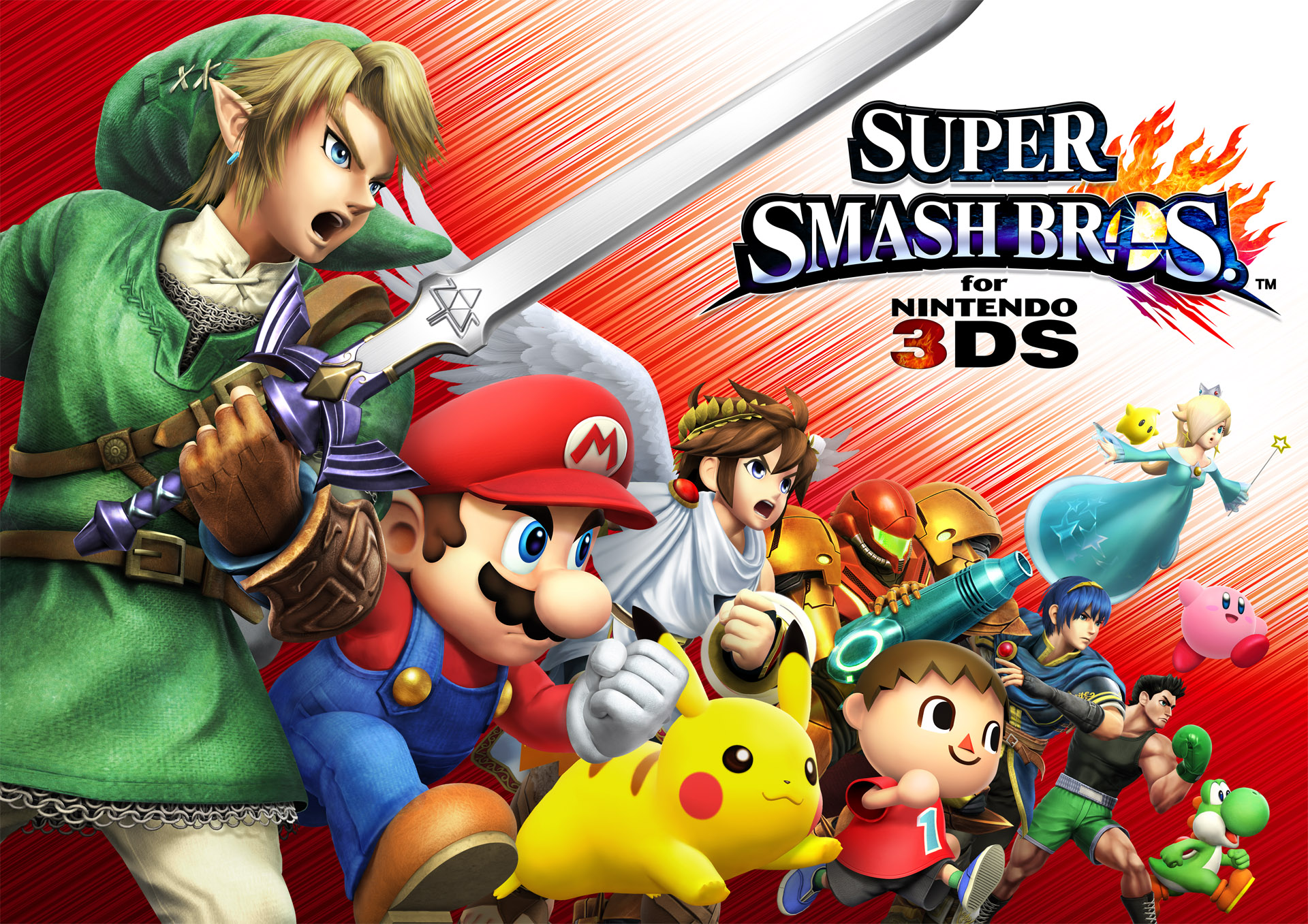 It’s finally here, performing for— oh wait, wrong game. Still, Super Smash Bros is one of the biggest releases of the year, and while we’re still waiting for the Wii U version, the 3DS version will hold us over. The question is, “Should I get Smash Bros. for 3DS even though the Wii U version will be superior?” Well, I would say yes, but with a few disclaimers.

If you’re not living under a rock you know what Super Smash Bros. is, so I won’t explain in detail the gameplay. However there are a few notes I need to make on the differences of Smash for 3DS and the previous titles, Smash 64, Melee, and Brawl.

As I’ve mentioned in my Super Smash Bros. 3DS demo first impressions here Super Smash Bros. for 3DS is faster than Brawl, but just a little slower than Melee. I now understand when Sakurai said that this game would be friendly to both newcomers and competitive players alike.

The new Super Smash Bros. roster is plentiful with Nintendo icons to choose from; Mario, Donkey Kong, and Link among other classic characters are there, along with newer icons such as Shulk and Lucina.

The graphics look really good for the 3DS, the characters are quality and looks as good as Brawl in my opinion. The 3D is used perfectly; it's not too intensive but still looks nice. It seems like Nintendo has been lowering the strength of the 3D in their recent games compared to the ultra-intense Pilotwings Resort, a launch game.

Super Smash Bros. 3DS added something that I personally like but could be considered bad; and that is customizations of move sets and stats. You can now add up to three items that change three types of stats: speed, defense, and attack, to any playable character. Want to make a heavy character fast? Go right ahead! Want to have a killer attack? Sure thing! It’s a lot of fun coming up with different combos, and we haven’t even gotten to the move customizations.

Every character has three choices for each of their special moves, and they are surprisingly different than what I originally expected. With all of these choices, you could spend many hours just trying different combinations for one character.

There are Miis too, and they have even more combinations. Three different types of Mii fighters are available to choose from, and they have their three selections for their special moves. The customizations can be overwhelming sometimes, but remember you don’t have to use any of these if you don’t want to.

Classic mode is back with a twist: you can choose from multiple paths, so you have some choice of whom you want to fight next. Classic mode has a difficulty slider like Kid Icarus: Uprising, where the more difficult you set the slider, the higher the reward. Whether that is trophies, new custom moves, or coins you can use to get more trophies, there are tons of reward to collect.

All-star mode is back too; where you fight every unlocked character in batches based on what time period the character first appeared. Home-run contest, target smash, multi-man smash are all back, along with target blast, a new mode that is actually quite fun. All of these modes are welcomed, but will probably not be used very much by most Smash players. 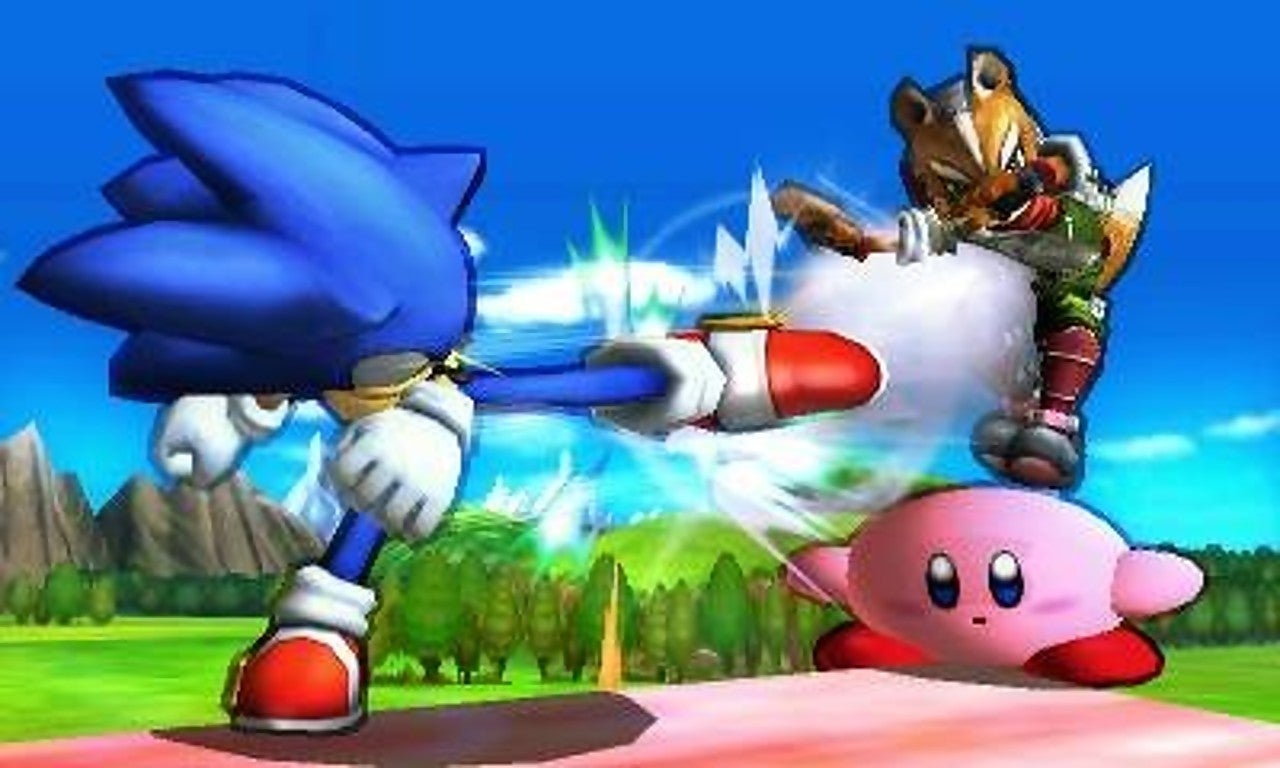 There is a new mode that will be unique to the 3DS version of Super Smash Bros. and that is smash run. You run around a fairly large map defeating enemies, like in the subspace emissary in Super Smash Bros. Brawl (Wii) when these enemies are defeated, they leave behind tokens of different kinds. These tokens will add to your stats such as jump, attack, defense, and speed. After five minutes of smash run, your stats will be added together, and you and your opponents will enter a contest. Sometimes it’s 300% smash, race to the finish, or who can climb the highest in a set amount of time. I really liked this mode, and play it at least once each session I play.

While all of these new and returning features are great, there is a major problem with Super Smash Bros. 3DS; there can be some serious lag while playing online. The lag ranges from none to the screen freezing up completely. Even though the lag is only temporary, it can be seriously annoying and can mess up the match.

There is another problem that is just as troubling; there have been reports of the circle pad breaking off of the 3DS. This isn’t Nintendo’s fault, however. As I covered this in the demo first impressions, my advice is as long as you are careful and don’t abuse the circle pad, it shouldn’t break. 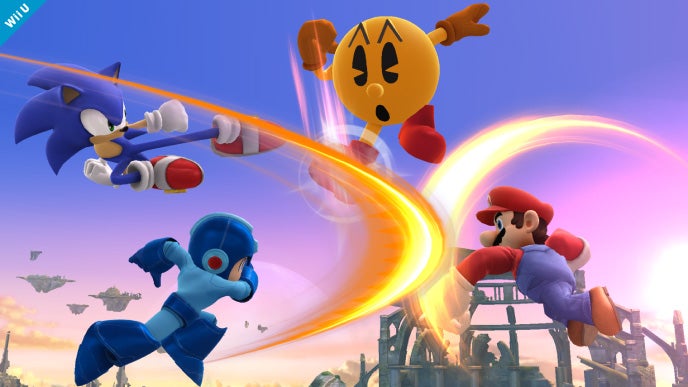 There isn’t very much to keep Super Smash Bros. for 3DS down, and the major two problems may make you cautious; but don’t let them deter you from picking up this quality title, even if you plan on getting the Wii U version.

Main Cons: Online lag is common, be careful with the circle pad

Re: Review: Super Smash Bros. For 3DS (3DS Retail)
on November 12th 2014, 11:20 amTowafan7
Excellent review once again! Thank you for publishing such superb reviews on our website.

@MechaFreiza This is my favorite Smash game as well! The roster is superb and the speed is perfect for everyone. And while the online lag is really, really annoying, it's not at all a game breaker because it doesn't happen every match. I've gone many matches with no lag at all.

@MechaFreiza wrote:Booya! Awesome review dude. This is my favorite Smash Bros. game yet! I can't wait for the game's Wii U release!

I feel the same way about this game lol.

@MechaFreiza This is my favorite Smash game as well! The roster is superb and the speed is perfect for everyone. And while the online lag is really, really annoying, it's not at all a game breaker because it doesn't happen every match. I've gone many matches with no lag at all.

I have experienced no lag whatsoever thus far.

Re: Review: Super Smash Bros. For 3DS (3DS Retail)
on November 13th 2014, 7:11 amGeekyGamerJack
Message reputation : 100% (3 votes)
Fantastic review, Gamergy! I'm with you on Smash Run and customisations, they're both really awesome! I ended up making twelve Mii Fighters, one of each colour and four of each class: the brawlers Zackaki, Zackoori, Zackmori and Zackari; the sword fighters Zackgeus, Zackwynn, Zacktic and Zackbeard; and the gunners Zackwave, Zackshoc, Zackton and Zacktanium. They follow a rudimentary element system based on their respective colours, and are named accordingly...well, except for one of them, since he's a pirate and deserved to have an appropriately punny name!

Re: Review: Super Smash Bros. For 3DS (3DS Retail)
on November 15th 2014, 12:10 pm.hacker
Great review! I totally agree with all of your pros and cons that you stated in your review.

Re: Review: Super Smash Bros. For 3DS (3DS Retail)
on November 16th 2014, 9:18 pmKokorOtaku
I'm so close to getting all trophies and accomplishments

Re: Review: Super Smash Bros. For 3DS (3DS Retail)
on November 17th 2014, 11:36 pmGuest
Beautiful review Gamergy you are such a talented reviewer!

I'm surprised how popular this review got so fast

I think this is my longest review yet, because there's so much content to cover in Super Smash Bros. 3DS! I also think this is one of my better reviews too. Glad it was received so well!

Enjoy Smash Bros. 3DS, and for Wii U when it's released in a few days!

I'm surprised how popular this review got so fast

I think this is my longest review yet, because there's so much content to cover in Super Smash Bros. 3DS! I also think this is one of my better reviews too. Glad it was received so well!

Enjoy Smash Bros. 3DS, and for Wii U when it's released in a few days!

I noticed the difference in quality right away!

Hopefully I'll be able to see just how wonderful this game is for myself in a couple days?

Re: Review: Super Smash Bros. For 3DS (3DS Retail)
on December 7th 2014, 2:38 pmNavi
Great review! This is an awesome game that deserves a positive review like this.

Re: Review: Super Smash Bros. For 3DS (3DS Retail)
on December 7th 2014, 5:36 pmSheldonTheGenius
What a superb review! I believe that it's your best work yet!

Re: Review: Super Smash Bros. For 3DS (3DS Retail)
on May 24th 2015, 10:45 pmGeekyGamerJack
I feel as though the only ones still playing this are people who don't yet own the Wii U version, including Yours Truly.

Re: Review: Super Smash Bros. For 3DS (3DS Retail)
on May 25th 2015, 7:32 amKokorOtaku
@Zack I do to, actually I think I play it more then the WiiU version, just because I have every classic and all star mode finished and don't feel like doing it with all characters again on WiiU. (the compleatest in me will someday though)

Re: Review: Super Smash Bros. For 3DS (3DS Retail)
Sponsored content
Permissions in this forum:
You cannot reply to topics in this forum