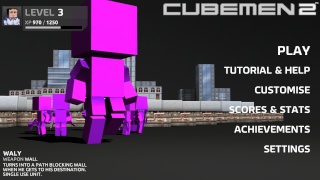 Cubemen 2 is a tower defense game developed by 3Sprockets and is Nnooo Studios first title that they've published themselves! Is Cubemen 2 just another tower defense title for the Wii U or is it a completely unique experience? Continue reading our review to find out!

The gameplay in Cubemen 2 is simple, you must strategically place units to protect your base while clearing the way for your foot-soldiers to take over enemy bases, however this concept does vary a bit from mode to mode. You must use cubes to purchase units and can only gain more cubes by destroying enemies. The starting number of cubes for each game are very limited so early domination of the map is key to winning!

The online multiplayer is enjoyable, though finding a match can be quite difficult. Some modes aren't available online, but most modes are, another cool feature is the map editor where you can use the same tools that the developer used to create literally an unlimited number of custom maps! These maps can be downloaded and played by other players as well, meaning that this game has literally unlimited gameplay! 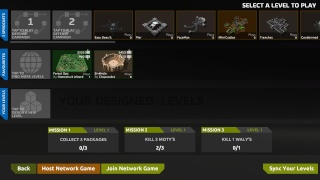 The Off-TV play is a nice feature, though it seems that sometimes the sound will fail to run on the Gamepad which is unfortunate, but not game-breaking. The controls are easy to learn and smooth as butter which is important for a strategy title such as Cubemen 2!

The graphics in the game won't win Cubemen 2 any awards, but they do look nice enough with many different map textures and good 3D character models, while the music is catchy and really sets the mood for the immersive strategic gameplay! 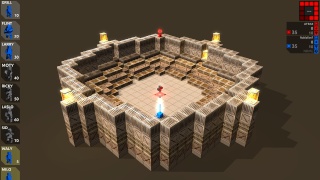 With great gameplay that is both strategic and enjoyable, and an incredible map editor and online multiplayer Cubemen 2 is a superb title for the Wii U eshop! The nearly flawless controls, decent graphics, and catchy music further cement this game's greatness, however some Off-TV audio issues and difficulty finding online matches do hurt this otherwise perfect title's review score, but we still highly recommend this title to any fan of the tower defense genre!

Re: Review: Cubemen 2 (Wii U eshop)
September 6th 2014, 2:46 pm.hacker
I enjoy the level of customization that this game allows and the online multiplayer is good as well! Nice review.

Re: Review: Cubemen 2 (Wii U eshop)
September 17th 2014, 12:07 pmRoboYoshi
I do wanna download this game, but I already have a bunch of tower defense games.

Re: Review: Cubemen 2 (Wii U eshop)
September 17th 2014, 6:25 pmKenshin A-Go-Go
Awesome review man!
Permissions in this forum:
You cannot reply to topics in this forum