Yacht Club Games Is Digging Up Another Update! 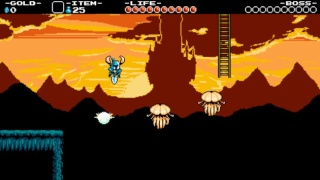 Yacht Club Games has confirmed that their version 1.1 update of Shovel Knight which recently went live on the PC platform will also be going live on Nintendo's platforms very soon with a few extra fixes exclusive to the Nintendo releases of the game! Here are the details regarding the upcoming update for Shovel Knight:

Yacht Club Games wrote:General: "Affects all versions of the game"!

Fix: Timing issue where the Inventory screen could be opened with the game unpaused.

Fix: Getting captured by Treasure Knight’s chest while using the Ichor of Boldness leading to a missing Shovel Knight.

Fix: Cheats not carried over in New Game+ when a file is reloaded.

Fix: Fall through floor if using Dust Knuckle when defeating Polar Knight during Round Table.

Tweak: Fixed a portrait and added one slacker to the Hall of Champions.

Game can now be played with out the GamePad! “Please re-connect GamePad” message will only display if it was your last used controller before disconnect or if you were displaying the game on the GamePad screen.

Fix: Music not resuming if a Miiverse post is selected while the inventory is open on screen.

Re: eshop: Shovel Knight V.1.1. Update Is Headed To The Wii U And 3DS "Soon"!
+
July 25th 2014, 10:59 amGolden Freiza
Booyaa! Nice patch, but I'm looking forward to the new campaigns and 4 player battle modes that were promised during the Kickstarter!