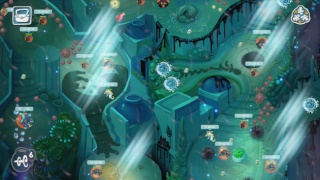 There aren't many RPGs on Wii U at the moment, but this fairly unique and charming turnbased underwater adventure is absolutely worth it! The 3DS has more RPGs but still you never played an RPG like this one before.

Both versions are identical.

Squids Odyssey puts you into the role of a team of squids in 90 arenas filled with enemies to beat, objects to find, obstacles to overcome, and objectives to solve. Entirely played from a topdown view, you just touch the squids and drag them into one direction to select its strength and angle and let go to flinch them. Simple as that, you move along the tracks, ramming into enemies, bumping into treasure chests, or cling onto anchors to not get thrown around by enemy attacks.

Each squid has an endurance bar (shown as bubbles) and with each move you lose some depending on the strength of your flinching. Once your bubbles are used up, it's the turn of the next team member. Once all team members have used up their moves, it's the opponents turn and all enemies in close range will come and try to drain your energy bar or knock you off the arena for an instant death. 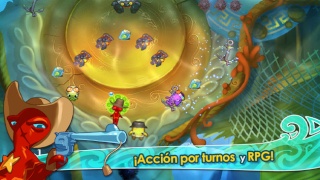 There are lots of reappearing items spread around in little bottles that give you a boost for this turn. They may fill up your energy bar, endurance bar, or make you stronger, give you a chance to avoid the next attack, trick your opponents or shooting stars at them. There's also a neat combo system in which you can hit multiple enemies at once. These combos along with pushing these little critters into hazards like sea urchins or dangerous water streams that will wash them away make for pretty satisfying gameplay.

In the beginning stages you have a predetermined team. It's just an introduction to the main characters, their background story, and each squids class. There are four classes and the big difference is the special ability. The scout has an extra boost, the healer can heal by bumping into you or being touched, the shooter can shoot from a distance, and the stomper hits everything around him.

Between stages you can change your team members, or buy items from the shop, and level up your characters. This is done with pearls that you gain for beating enemies, finding treasure chests, or getting stars. There are three stars for each stage: A hidden star in each level that is invisible but appears when you're close to it; a star for beating the stage under a certain amount of rounds; and a star for beating the stage without losing any team members. 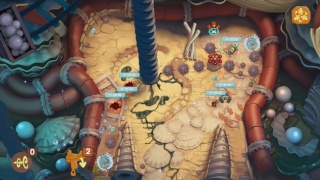 The graphics are beautifully handdrawn, the animations are funny (especially watching your squids stretch as you pull them), there's tons of variety in level design, the story is cliche but not cringeworthy, the music and presentation is quite good, the Wii U version has practical Off-TV play and the 3DS version has lovely 3D depth, and it would be a perfect game if it wasn't for some minor drawbacks: There are holes where you can fall down, and while in most cases the game is generous enough to not let you fall off even if it looks like you're out of bounds, in certain stages you're getting sucked through the ground if you're too close to an abyss. Another problem is the ending. It's a 30 hour game (if you don't count the 90 hard levels you unlock later) but there's no conclusion to the plot. It's a "To Be Continued" game as if a sequel was always on the plan. That's a bit disappointing, as I wanted to resurrect a certain character and maximize his level for the hard stages, and also for the nemesis that turns up but never gets a chance to fight. There's also a minor control issue as you need the A button to activate your special ability, when in fact the L or LZ button would have been a better option as most people use their right hand for the touchscreen.

Anyway, it's a content-rich, fun, and original game and for only 12,99€ it's a definite recommendation, especially if you live in Europe where you get the Wii U version for free when you buy the 3DS version.

Re: Review: Squids Odyssey (3DS eshop/Wii U eshop) (PAL Region)
on July 18th 2014, 12:53 pmMechaFreiza
Cool, but definitely not a game for myself. Awesome review though dude!

Re: Review: Squids Odyssey (3DS eshop/Wii U eshop) (PAL Region)
on August 1st 2014, 2:17 pmGrumblevolcano
This game is really long, but it would be nice if you didn't unlock all of the shop items by the end of the first few chapters of the game.

Re: Review: Squids Odyssey (3DS eshop/Wii U eshop) (PAL Region)
Sponsored content
Permissions in this forum:
You cannot reply to topics in this forum