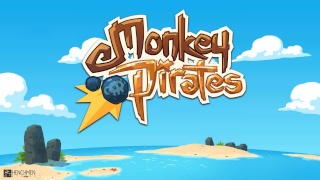 Monkey Pirates is a fast comical topdown multiplayer action game for up to five players, a rapid-fire cannonball contest against your friends in a variety of customizable modes.

It's welcoming you with a nice hand-drawn Carribean setting and a pretty Monkey Island-like title track, so there's definately a good atmosphere from the get-go.

The main menu is a very introducing one, with an instruction manual and a playable tutorial being the first options, followed by the singleplayer challenges, and finally the main portion of the game: the versus mode. You can play these in order to make sure you're ready for the main deal of the game or jump into the versus action straight away.

One thing straight ahead: The game always takes place on the tv screen. The GamePad can be used for navigating the menus, and it works as a controller in singleplayer. For multiplayer though everyone needs a Wiimote. The GamePad is also needed for the five-player Sea King mode (but more on that later). 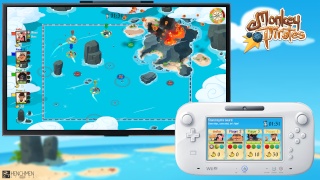 You see your ship from an overhead zoomed out view and steer left and right to turn around. Unfortunately there's no casual control (press up to move up, press down to move down, etc.) I know a lot of people that have trouble with left/right steering from a topdown perspective. For this reason they couldn't get into the game. Other than that the controls are fairly basic with one button firing the cannons from the front and the sides, and the other button casting the anchor which makes cool drifts possible.

One of the unique mechanics in games with sailing ships is the wind: There's a wind radar around your ship and its colors indicate the wind strength, and so you have to always keep an eye on it and use it to your advantage which adds a fresh tactical component to the classic arcade gameplay.

Crates may emerge from the depths of the sea containing one of fifteen different items that give you more offense, defense or something else instantly like the hilarious Coconut Juice that makes the screen and music go dizzy. (You can deactivate items you don't like.) Take three hits and you sink and lose points and your items, only to respawn seconds later. The winner will be determined when the time is up or a certain score is reached. Some stats are also saved.

But before getting into combat, you and up to three of your friends (or CPU controlled characters) get to choose from four different monkey types (long range shot, increased handling, faster firing rate, more speed) and equip one of eleven badges (to be invulnearable to certain attacks or have a little special power), then select one of nine small-sized battlefields all with their own theme (like an open ocean, a beach, a reef, islands, or icy fjords). Some even have hazards like erupting volcanos or dangerous water streams. You can also select the items and the time or score limit. 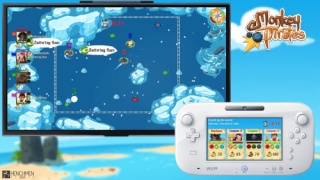 There are four multiplayer modes: "Stand by the Board" is the obligatory timed deathmatch mode where you try to not be killed by others and sink as many ships as you can. "Jolly Roger" is the classic capture-the-flag mode and "Banana Race" is a frenzy battle over emerging banana barrels.

The GamePad specific "Sea King" mode can and should be played with five players. Four players will duke it out like in the other modes, but the player on the GamePad has a special role. He's been given three deeds from which to select one. This deed needs to be fulfilled by the GamePad player to score points. Only then the next set of deed choices become available. A deed can be something like "Player 2 will reach 30 bananas next" To fulfill this deed the GamePad player can select items from his menu and give them to a player. These items need some reloading time before they can be used again. Unfortunately there's not much variety in the choice of deeds. They repeat over and over again just with different numbers. A shame the most interesting mode is so shallow when it has so much potential. Also, sometimes, even when a deed is fulfilled the game takes a while to recognize it which is pretty random and certainly some kind of bug. Speaking of bugs, there is one major bug in this mode, where you cannot fulfill a certain deed when you're playing with less than 4 ships (human or cpu). This definately needs an update.

Having said everything about multiplayer let's have a quick look at the small singleplayer part of the game. The Challenge Mode tests your skills in four different missions, each with their own top ten highscore list. Score certain points to earn medals and unlock extras such as Character Profiles and Art Gallery. It's more of an extended tutorial and should be seen as a bonus. That said, a whole lotta more singleplayer challenges were definately welcome, aye!

On a final note there's something to be said about the English translation. It's one of those games were in one sentence it says "canoonbals" and in the next it's "cononballs" or something. The developers should definately proofread all text in the game again. For some people the myriad of spelling mistakes add to the monkey and pirate charme, but for others it comes across as simply unpolished.

Re: Review: Monkey Pirates (Wii U eShop) (PAL Region)
on July 1st 2014, 1:05 pmTowafan7
SKTTR's latest European review is now live! He's also reviewing the European release of Armillo as well! Keep an eye out for both our European and North American Armillo (Wii U eshop) reviews in the upcoming week, but in the meantime let @SKTTR know what you think of his review of Monkey Pirates (Wii U eshop) here in the comments!

Re: Review: Monkey Pirates (Wii U eShop) (PAL Region)
on July 1st 2014, 1:08 pmTowafan7
Great review by the way @SKTTR! It's awesome having reviewers from multiple regions now! By the way do you think could possibly review a Wii VC or WiiWare game that wasn't released in North American as your next project after Armillo?

Rukiafan wrote:Great review by the way @SKTTR! It's awesome having reviewers from multiple regions now! By the way do you think could possibly review a Wii VC or WiiWare game that wasn't released in North American as your next project after Armillo?

Thank you very much, Brian.

I appreciate the review copies much and do my best giving all games a deep and fair spin.

I will se what I can do when I finish up the Armillo review. What EU exclusive games do you have in mind?

Rukiafan wrote:Great review by the way @SKTTR! It's awesome having reviewers from multiple regions now! By the way do you think could possibly review a Wii VC or WiiWare game that wasn't released in North American as your next project after Armillo?

Thank you very much, Brian.

I appreciate the review copies much and do my best giving all games a deep and fair spin.

I will se what I can do when I finish up the Armillo review. What EU exclusive games do you have in mind?

Any would be great, but I think that you should pick one that's still available and that you feel is a great game that is overlooked by most Wii owners!

Re: Review: Monkey Pirates (Wii U eShop) (PAL Region)
on July 2nd 2014, 1:57 pmAqua Cherry Blossom
Nice review, but is this game as good if you only have one or two friends that can play with you during multiplayer sessions?

Re: Review: Monkey Pirates (Wii U eShop) (PAL Region)
on July 3rd 2014, 12:34 pmLove4Gaming
This doesn't sound like a game I would enjoy playing, but nice review all the same!

Re: Review: Monkey Pirates (Wii U eShop) (PAL Region)
on July 3rd 2014, 2:09 pmInuyasha4z2
I have zero interest in this game, but the review was still an enjoyable read.

Re: Review: Monkey Pirates (Wii U eShop) (PAL Region)
on July 3rd 2014, 10:45 pmNINTENBRO
I think monkeys should just stay in trees. This is how diseases migrate to other countries.

@NINTENBRO82 wrote:I think monkeys should just stay in trees. This is how diseases migrate to other countries.

Natsume wrote:A barrel of monkeys is better than this.

You mean a barrel of monkeys at the bottom of the sea, right?