Review: Stick It To The Man (Wii U eshop)

Review: Stick It To The Man (Wii U eshop)

Stick It To The U! 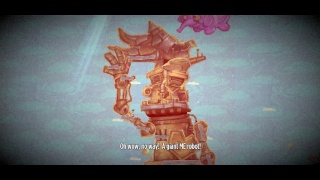 Stick It To The Man is an indie platforming title developed by Zoink Games and published by Ripstone Games. You can read minds, pull and rip objects like paper, and even use those ripped objects as stickers to solve puzzles, but is this as fun as it sounds? Keep reading to find out!

The story of Stick It To The Man is fairly original, the protagonist gets a head injury and gains psychic powers due to a certain variable and when he awakes he has trouble dealing with his newfound powers and ultimately gets blamed for a crime that he didn't commit. Thus he has to use his powers to prove his innocence. Overall it's pretty good, but could've been executed better. Some of the humor falls flat and the plot sometimes feels like it has holes in it. 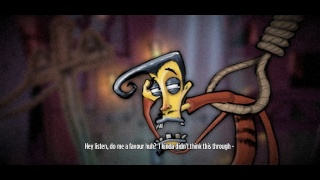 In Stick It To The Man mind reading and puzzle solving is an important aspact of the game and while the concept is good the puzzles and problems you must solve are much too easy to figure out making this game easier than it should be. The platforming in the game is also too basic with not much action and no real danger of dying, but even so it doesn't make the game terrible, however it's still a major issue.

This is a huge issue that hurts the game's overall score, however the controls on the other hand are virtually flawless and very easy to learn! The Off-TV play is a nice feature and the game looks quite gorgeous on the Gamepad! 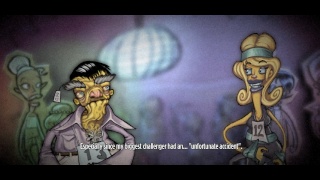 The graphics in the game are very nice with detailed character models, impressive cut-scenes, and an interesting art direction that has you traversing through a world made from paper cut-outs! The lighting and other effects are also impressive making this one of the game's strong points!

The music is also extremely nice and fits the game well, however some of the voice acting can be somewhat annoying, but this is only a minor issue. The sound effects are also fairly decent, but when compared to the impressive music it sort of falls a bit flat. 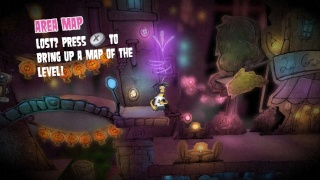 Stick It To The Man has some very good aspects to it including a very original story, flawless controls, superb graphics, and excellent music. However several issues with the gameplay as well as some fairly annoying voice acting, and holes in the game's plot holds the game back. Still the game is certainly worth looking into purchasing if you enjoy games with alot of originality!

Hi. Here's SKTTR. In my opinion STICK IT TO THE MAN! is one of the funniest adventures in recent years. The atmosphere, music, graphics, voice acting, humour, puzzles, and story are all on a top-notch level, plus that mindreading mechanic is something really fresh. The additional GamePad features aren't necessary but appreciated anyway. It's unbelievable that they sell it for such a low price on Wii U. Fans of games like Monkey Island and The Cave should add it to their collection now, if they haven't already.

Re: Review: Stick It To The Man (Wii U eshop)
on May 16th 2014, 4:34 pmGrumblevolcano
I won't be downloading this because it just doesn't sound like my cup of tea. However your review was a good read!

Re: Review: Stick It To The Man (Wii U eshop)
on May 16th 2014, 8:43 pmNINTENBRO
I downloaded this game day one, but I haven't even tried it out yet. The strangely unique art style and ambiance made this game an impulse purchase, for me. A 7/10 is still better than average.

Edit: I just noticed this, but what happened to the score policy for gaming reviews?

Ahem anyways nice review Rukiafan the game sounds decent and perhaps I will download it sometime?

Re: Review: Stick It To The Man (Wii U eshop)
on May 17th 2014, 11:19 amKangaroozoo
How much time does it take to finish this game? When can we expect this title to release in AU?

Re: Review: Stick It To The Man (Wii U eshop)
on May 17th 2014, 11:27 amDigiDestined
I have no interest in this game, but it seems to be reasonably good based on what I have seen and heard about the game. =)

Re: Review: Stick It To The Man (Wii U eshop)
on May 17th 2014, 4:15 pmSuperVash
Meh I don't download games that score less than 7.5/10.
Permissions in this forum:
You cannot reply to topics in this forum