SteamWorld Dig is an interesting game. You play as a robot miner named Rusty, and you are looking for your missing uncle in a mine. Rusty runs across his uncle's corpse, and then your first goal is to mine some ore. The story and the objectives change as you progress through the game.

You start out with just a pickaxe, but eventually you will unlock boots that you can run faster in, dynamite you can throw, and more. Some of these take up a water meter, which you can refill by jumping in water. Make sure your lantern has fuel in it, if your light goes out you can’t see ore!

The game doesn’t really tell you the controls, so I’ll explain them.

Rusty learns more moves throughout the game, but there are hints on how to use them. How do you go back up? Wall jump of course.

After you mine ore, bring it up to the surface and sell it. As you sell more ore, more tools and power-ups will be unlocked to buy from stores, as well as finding certain items in caves. The power-ups range from increasing your max health, max water, upgraded pickaxe or drill, and more. Some items require orbs to buy; some don’t cost money but only costs orbs. Keep an eye on your orb count, as orbs are more rare than ore.

Graphically it looks good for an indie game, although nothing seriously impressive. I usually don't care about graphics, but I wish the 3D was used more. The 3D is used only a little more than, say, New Super Mario Bros. 2. Music wise? It was calming, but the sound effects are so much louder than the music that sometimes it's hard to enjoy the music 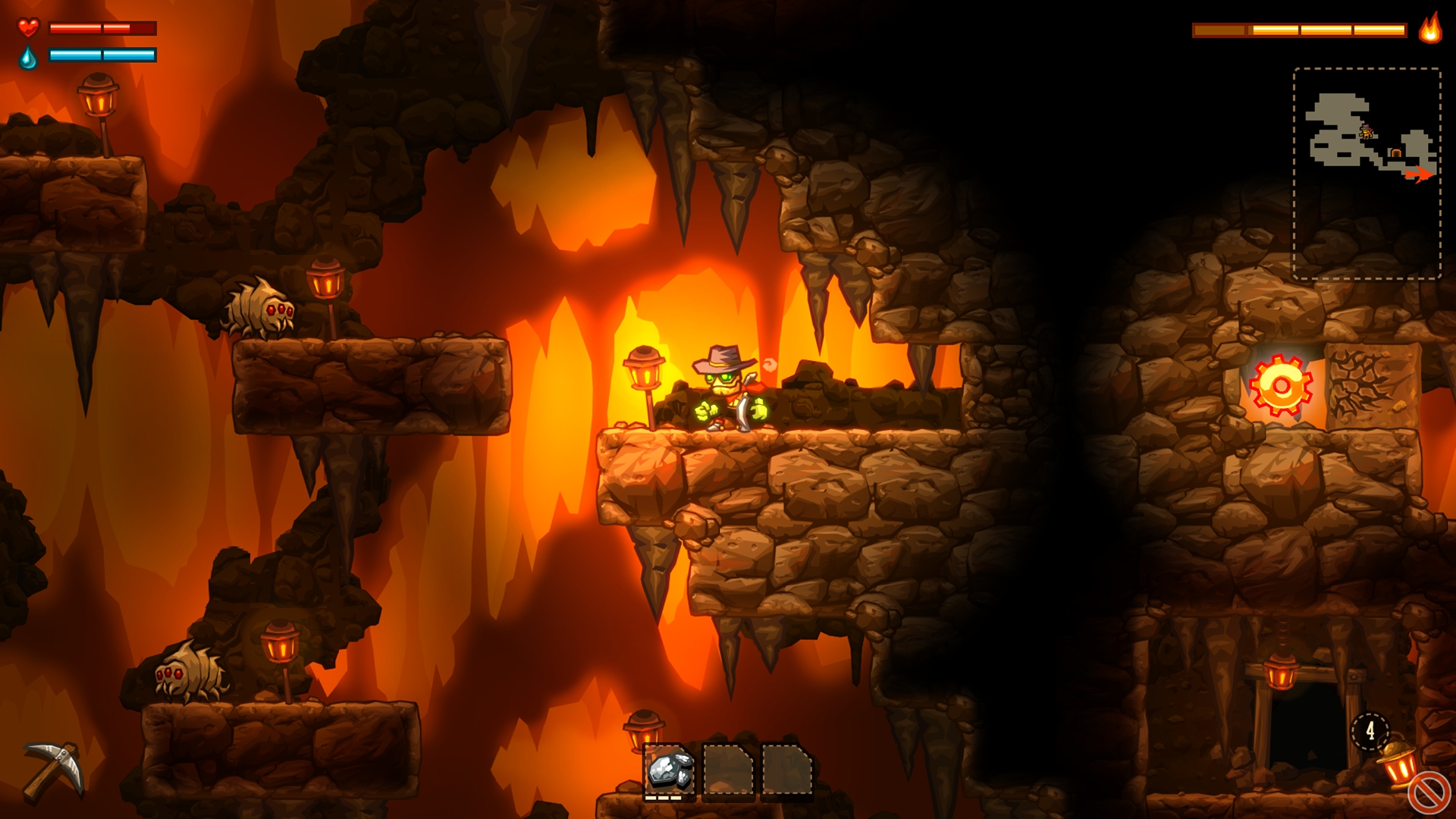 Lets talk about the enemies. I may have bad-mouthed the graphics and sound, but the enemies make up for it. At first the only enemies you will face are small bugs that just walk left and right, but it goes to enemies that will throw dynamite, enemies that will chase after you and explode, and more. There is even a final boss, and it is pretty hard. The enemies are tough to fight sometimes, as you can lose health fast. I died quite a few times on the final boss alone. Overall I thought the enemies made the game, as if there were no enemies the game wouldn’t be as much fun.

It only took me just under 6 hours to beat SteamWorld Dig, but it was a lot of fun. I completed it in only two play sessions; it was addicting enough to play for 3 hours at a time. Yes the graphics and sound aren't the best, but the gameplay is great. Is it worth paying about $10 for a game based on a free web game? Maybe, it depends on how much you want to spend, but if you like Motherload and want it on the go this is the game to get.

Main Cons: graphics and sound not the best, very short game, simpler version is available as a free web game

Re: SteamWorld Dig Review (3DS eShop)
on February 25th 2014, 12:47 pmNINTENBRO
I think the spritework for this game is superb. The graphics may not be all that impressive, but the art style most definitely is. Well written review Gamergy, I would've awarded the game the same score.

Re: SteamWorld Dig Review (3DS eShop)
on February 25th 2014, 1:46 pmTowafan7
This game is on my radar now because of your review! Nice work dude.

Re: SteamWorld Dig Review (3DS eShop)
on February 25th 2014, 2:00 pmMarioman18
This sounds like what Spelunker for the NES should've been, brilliant review Gamergy.

Re: SteamWorld Dig Review (3DS eShop)
on February 25th 2014, 8:24 pmGamergy
@NINTENBRO82 For the look they were going for I thought it was good, but overall still fell short in my opinion. I really wish the 3D was better, however I don't think the score would be any different, as I base my scores more on the fun factor than graphics.

@Rukiafan It's a fun game, but too short. I bet if I did a speed run on it I could beat it in under 5 hours, but for $10 you'll get your money's worth.

I'm hoping for a sequel, but then I remember I'm still waiting on Elite Beat Agents 2

Re: SteamWorld Dig Review (3DS eShop)
on February 26th 2014, 11:27 amClαππαd
I didn't like this game very much, but I know it's just a matter of preference of games.
This review is very nicely written @Gamergy.

Re: SteamWorld Dig Review (3DS eShop)
on March 11th 2014, 2:55 pmSuperVash
Superb review. The game starts off slow, but after the first 15 minutes it gets much better.

I'm hoping for a sequel, but then I remember I'm still waiting on Elite Beat Agents 2

At first I read that as Elite Beat Angels 2 and thought to myself what the?!

@Gamergy wrote:I wouldn't say it's much like cave story. The graphics look similar and the 2D platforming is, well, 2D of course, but in Cave Story you're shooting more. SteamWorld Dig is attacking with a pickaxe/drill. You do get an eerie feeling while playing, just like in Cave Story. Other than that eerie feeling and the same type of graphics, they are very different. Try playing the web game motherload before getting SteamWorld Dig, but motherload is basically a simplified version of SteamWorld Dig, and not as good.

The graphics are much more detailed in SteamWorld Dig though