Knytt Underground is an atmospheric side-scrolling adventure title that has elements of classic titles such as Metroid and Castlevania, but adds a bunch of new elements of its own as well. But how does this title measure up against the heavy hitters of the genre? Well, let's find out! 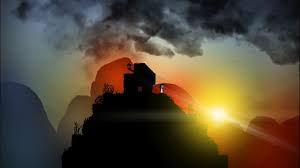 Knytt Underground is set in a post apocalyptic world where the entire population has escaped a catastrophe by living underground. The game doesn't go into much detail regarding the reason why until the end of the game and overall the story is just filler between missions. The gameplay is excellent as it uses the same floaty physics as Metroid and Cave Story with several unique elements such as orbs that can allow your character to rocket into the sky, soar horizontally to reach distant platforms, and more! You will be doing many missions during the game that will require you to fetch items and find people. There are many quests that are optional, but some are required to advance the story.

During the mid-point of the game you will obtain a new ability that will allow you to access areas that were completely inaccessible before so don't worry if you can't reach certain areas early in the game! The game is quite lengthy as well, though it might only take around 20 hours to beat if you want to 100% this game be prepared to spend over 30-35 hours with this title!

The controls in Knytt Underground are easy to learn and are quite responsive. You can use either the Gamepad or a Wii Remote + Classic Controller Pro and both options are good choices as both have good button layouts for this game! 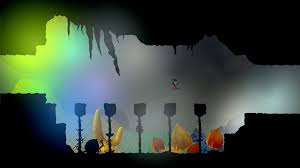 The graphics in Knytt Underground were shocking at first! The game has a unique art-style that uses both dark impressionism art and photographic images of plants, mushrooms, fruits, rocks, etc. and as a complete package is visually impressive! Knytt Underground's visual style is easily one of the best we've seen in a Wii U eshop title that isn't a retail game! And it isn't just the graphics, the ambient sound effects and music fit the game so well to an extent we have never seen before, making this game a true masterpiece! 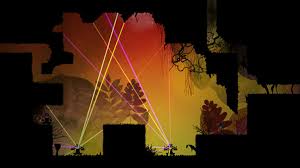 With excellent gameplay, smooth controls, and an unmatched art-style and audio ambiance we can't recommend this game enough! If you own a Wii U and have a working internet connection and are old enough to play this game you should do yourself a favor and download this amazing title!

Re: Review: Knytt Underground (Wii U eshop)
on December 27th 2013, 12:41 pmAkatsuki
This game looks good. Is this coming to Japan at some point?

Re: Review: Knytt Underground (Wii U eshop)
on December 29th 2013, 11:26 amSuperVash
Great review. This is one of my top 3 all-time favorite eshop games so I agree with the perfect review score!

Re: Review: Knytt Underground (Wii U eshop)
on January 1st 2014, 2:17 amMarioman18
This game looks good, but I'll wait to see if it receives a temporary discount in the next month or two before I download the game.

Nessman18 wrote:This game looks good, but I'll wait to see if it receives a temporary discount in the next month or two before I download the game.

I've downloaded a lot of eShop games that I should've waited to go on sale before purchasing. I'd have quite a bit more money in my eShop account right now, if I had waited to by most of them.

Nessman18 wrote:This game looks good, but I'll wait to see if it receives a temporary discount in the next month or two before I download the game.

I've downloaded a lot of eShop games that I should've waited to go on sale before purchasing. I'd have quite a bit more money in my eShop account right now, if I had waited to by most of them.

I think this is the case for all of us

And before I forget nice review Rukiafan

Re: Review: Knytt Underground (Wii U eshop)
on January 4th 2014, 10:43 pmShanaNoShakugan
Is this come to Japan? Look so fun!

Japan doesn't seem to get very many of these indie titles released in their region.

Re: Review: Knytt Underground (Wii U eshop)
on January 9th 2014, 2:06 amSKTTR
Dora Walkthrough (in every multiple choice I chose Dora instead of Celia)

I also did many secret quests, in- and outside the main chapter.
I'm still missing a few items (3 free spaces in my inventory screen)
and I have only 6 (out of 20) badges.
I couldn't find a way through the chaos zone yet. I guess that's one of the many secrets I'm still missing.

The game started very slow, I don't know why it even has the first two chapters but the atmosphere and music and my longing for adventure and exploring kept me going despite the odd narrative and characters. As I made progress the world and setting draw me in, made me curious and I even ended up liking the characters I thought were stupid. Anyway, without a doubt the best part in this game is the fresh and intense platforming. Extreme Ballmorphing Combojumps through multiple screens got my 60fps ninjasenses pumping with laserblasting robot hordes and lavadripping ceilings adding to the action. Spot-on controls and physics! After the challenging sections collecting an item or pressing a switch to unlock a shortcut is very rewarding.

Re: Review: Knytt Underground (Wii U eshop)
Sponsored content
Permissions in this forum:
You cannot reply to topics in this forum