Hit the lane with your friends. 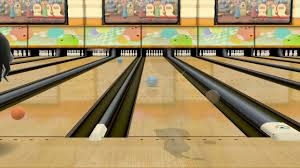 Wii Sports has always been about family fun and playing with friends and Wii Sports Club: Bowling takes multiplayer gaming in the series to the next level with online matches against friends and even members of the games' plethora of sports clubs that you may join. Clubs are sort of like regional and national teams that constantly compete to become the best club of a region, in my case that is the Americas. The online is pretty smooth in this sport and there is no shortage of people to play together with online.

The controls are accurate and responsive and the you will only rarely have to recalibrate your Wii Motion Plus controller. It's rare that I will say something of this sort, but Wii Sports Club: Bowling could actually help improve your real world bowling skills.

Wii Sports Club: Bowling also has a challenge mode and a 100 pin mode which are very fun to play. 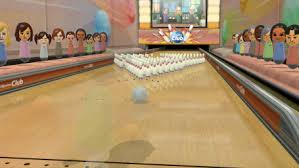 The graphics do not seem much different from the Wii version of the game which is disappointing since it is supposed to be in HD, but the game still looks very pretty. The game has very realistic ball and pin physics which react the way they would in a real game of bowling so overall the game looks nice and runs smoothly.

The ambiance makes you feel like you are really bowling at an official bowling alley, but the single music track that loops over an over gets annoying. If there were two or three more songs it would not be annoying, but this is not a game ruining issue. 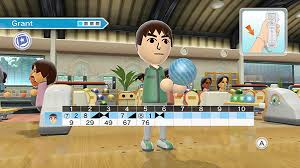 This is a fun game to play with the family or online with your friends and can even improve your real life bowling skills. The game also features realistic physics and the most accurate controls of any bowling game out there. The fact that the graphics have only slightly been improved over the original Wii Sports and there is only one music track that loops over and over drags down this otherwise incredible Wii U title.

Re: Review: Wii Sports Club: Bowling (Wii U eShop)
on November 11th 2013, 12:41 pmShounenMania
Sweet review! I agree with your score, but this quote says it all for your next review.

If the online were better I might have considered downloading the unlimited version of this game lol.

As for the review itself, I completely agree that the one song track that loops forever in the game is very annoying, and I was also a bit disappointed by the minuscule improvement of the game's graphics, but the game is quite solid nonetheless.

Re: Review: Wii Sports Club: Bowling (Wii U eShop)
on November 12th 2013, 2:39 pmSonicKnuckles
I can only imagine how bad the score for Wii Sports Club Tennis will be considering how laggy and unstable the game is during online matches, but at least this game is deserving of that 8 it was awarded with.

Re: Review: Wii Sports Club: Bowling (Wii U eShop)
on November 12th 2013, 3:02 pmKokorOtaku
Great review, I bought both right now since I feel like I'd waste more money on the 24 hour trial

Re: Review: Wii Sports Club: Bowling (Wii U eShop)
on November 18th 2013, 1:36 pmElza
I love this game and your review is quite amazing as well!

Re: Review: Wii Sports Club: Bowling (Wii U eShop)
on January 18th 2014, 12:27 pmLizofDoom
Great review!
Permissions in this forum:
You cannot reply to topics in this forum