Just What The Doctor Ordered! 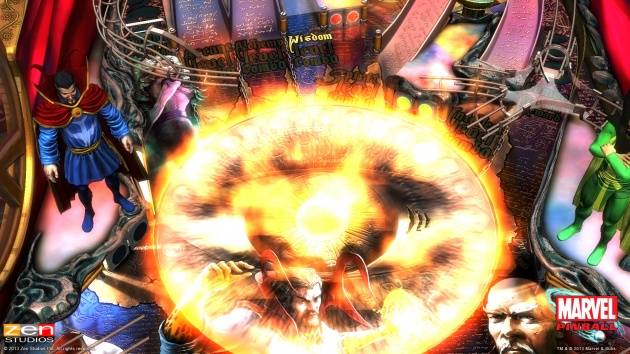 Zen Studios has done a marvelous job at offering excellent dlc for their Wii U eshop title Zen Pinball 2! With many varied tables and sets on offer for very reasonable prices.

Zen Studios has stated the following in their latest press release:

"The greatest powers of the occult, both from our own world and the darkest dimensions in existence, are combining their forces to take over Earth. And only one man can stop them – Doctor Strange, the Sorcerer Supreme! With the help of the beautiful Clea and his faithful servant Wong, the Master of the Mystic Arts faces his greatest challenge ever in Doctor Strange pinball, the newest addition to the Marvel Pinball library."

"Strange’s rival sorcerer Baron Mordo has called upon the demonic forces of the Dread Dormammu and the Fear Lord, Nightmare, all part of his plot to assume the mantle of Sorcerer Supreme for himself. Meanwhile, Shuma-Gorath, the Lord of Chaos, resides in the background with nefarious plans of his own…"

The table is expected to be released in December with the Wii U being one of its target platforms! Below is a trailer of the upcoming dlc table, be sure to check it out!

Re: Doctor Strange Table Coming To Zen Pinball 2 (Wii U eshop)!
October 15th 2013, 2:22 pmAmufungal
I would prefer some more tables that weren't based on Marvel series