A blast from the past with a new gen twist!!

If you grew up in the late 80's early 90's than you probably remember Disney's hit cartoon Duck Tales.  Based on Uncle Scrooge comics by Carl Barks, Duck Tales paved the way for other cartoon series by Disney.  At height of its popularity Duck Tales could be found everywhere.  On lunchboxes, bed sheets, clothing, even a movie released in theaters.  Since also during this time the NES was popular a game based on the series also appeared.

One of the most beloved games on the NES, Duck Tales pleased fans and critics alike.  Created by Capcom, the game shared alot of similarities with Capcom's hit Mega Man including the ability to select which level to start at.  The graphics where some of the best on NES and the music still to this day is regarded as some of the best chiptune music to come out of the NES Era.  For years it was one of the most requested games to come to the Virtual Console service but for reasons only know to Capcom and Disney it has never came out on the VC service, which meant that for fans of the game they either had to pay alot on auction sites like Ebay or like myself hang on to their beloved cartridge all these years.

Well Capcom and Wayforward have done the next best thing and that is releasing Duck Tales: Remastered for the Wii U eShop, XBLA, PSN and PC. 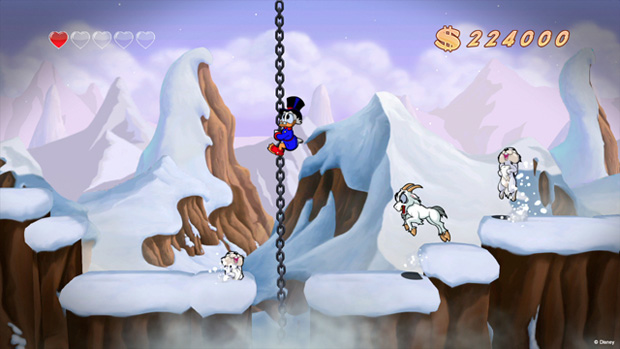 First of let me say this game is not a reboot or sequel to the original NES game it is indeed an enhanced version of the NES game which is a great thing for fans of the original or for those who have never played the original.  The level layouts are pretty much the same, there are a few tweaks here and there and the boss battles have been redesigned but for the most part if you remember the levels from the original than you will be in familiar territory.

Duck Tales is a platformer that you play as Uncle Scrooge the richest duck in the world and are searching the world over for 5 legendary treasures to increase your wealth.  Your journey will take you to 4 places across the globe, a rainforest and ancient ruins in the Amazon, a haunted castle in Transylvania, a mine deep in the African earth, and the snowy mountain tops of the Himalayas.  The last destination is the surface of the moon.  As you go through these levels to discover one of the legendary treasures you  pick up gems that add to your overall total wealth and even get assistance from other Duck Tales characters like Huey, Dewey, and Louie, Webby, Mrs. Beakly and more characters that will come as surprises.  Other Duck Tales characters that make an appearance are Magica De Spell, an evil sorceress that is after Scrooge's lucky first dime, Launchpad McQuack, Scrooge's pilot and even the Beagle Boys. 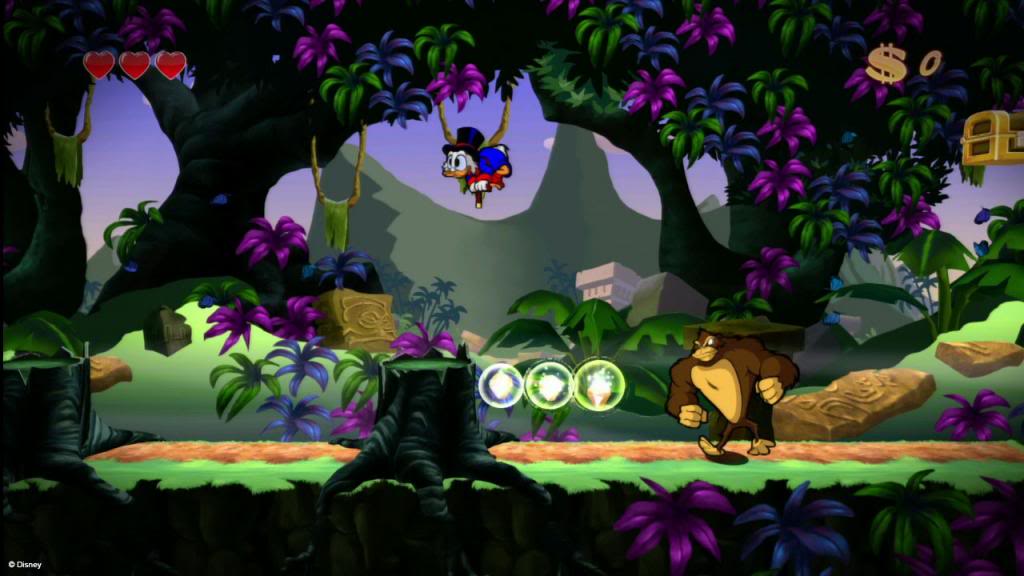 The graphics have received the biggest overhaul and are some of the best I have seen on the Wii U.  The graphics actually look like they came right out of the tv show.  The colors are bright vivid and beautiful and really add to the mood of the game.  In places like Transylvania the graphics are darker to add a more spooky atmosphere but of course that is expected in a haunted castles.  Also to add Duck Tales: Remastered has cut scenes to explain the plot of the game and the reason why Uncle Scrooge is collecting the treasures something that wasn't really explained to well in the original game due to the size limit of cartridges.

Along with the graphical overhaul Duck Tales: Remastered has had voice overs for the characters added, and to a pleasant surprise are the original voice actors from the cartoon series which adds to the nostalgia factor.  The music had been remixed as well and sounds real good.  Even though the chiptunes have been replaced by the sounds of electric guitars and other instruments it really adds to the updated this game received but yet the familiarity of the song will have you humming along just like you did when you played the NES version.

Play control is there too.  Uncle Scrooge has two ways of attacking the first one is probably the one most people will use, which is a pogo attack.  Uncle Scrooge will bounce on his cane like a pogo stick and landing on enemies with it will usually kill them.  Some of them like bosses will take a few more hits with the pogo attack.  The other attack is the golf swing where if Uncle Scrooge is next to an item like a rock or the Mummy Duck's ball and chain he will  swing his cane like a pro golfer and send the item flying across the screen.  For players of the original game you can use the original buttons configuration for the pogo jump which consists of holding the down button on the control pad and Y or A but if that's not your cup of tea or are just new to the game you can switch the pogo attack to be used by only pressing the Y or A button giving those who need it an easier way of doing it.

This games has alot of extras as well which are a nice feature.  You can unlock various concept art and other bits of trivial with the money you collect and with 3 difficulty levels I am sure that many of you will be collecting a lot of money.  There is a new intro level as well the plays out more as a tutorial to help new players and old players who maybe haven't played the original in awhile learn the ropes.

If there is a negative to this game which it is hard for me to find one I will say that at times the hit detection does seem to be off.  Often I have found at times myself receiving a hit when I think I shouldn't have been.  Mostly when I am jumping on a boss or a lesser enemy.  A few times it has been when I have had to jump over spikes and I land on what looked safely on the other side only to see the hit animation and my life meter go down a point.  Still its not a deal breaker for me. 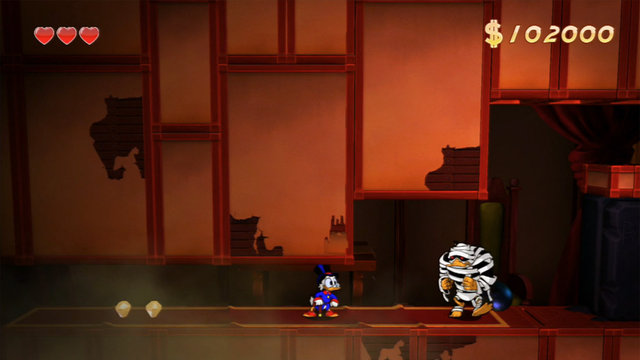 Whether you have played the original or this will be the first time you play it you are in for a real treat.  Quite honestly it has been years since a Disney game of this quality has come out and for us who remember the NES era Disney games this will bring back memories.  With graphics and a storyline to match the tv series and the music to match the atmosphere this game will surely bring a smile to a Disney fan's face.  If you own any of the platforms that this game is available you will be surely missing out of one of the best games this year if you don't get it.  This is quite possibly the best game this year that the download platforms have to offer.

Re: Review: DuckTales: Remastered (Wii U eShop)
on August 14th 2013, 3:37 pmTowafan7
Timely review Tasuki and your review is spot-on a job well done.

Re: Review: DuckTales: Remastered (Wii U eShop)
on August 14th 2013, 5:28 pmTasuki
Thank you Rukiafan that means alot to me. Just to know I played through both the original which I have on cartridge and the remastered last night to compare them for this review. I wanted to be as complete as I could.

I honestly hopes this paves the way for other Disney remasters perhaps we will see a Chip N Dale Remastered.

Re: Review: DuckTales: Remastered (Wii U eShop)
on August 15th 2013, 1:55 pmAqua Cherry Blossom
It seems that the remake is even better than the original?
I may download this game soon.

I have never played this game before, but I have heard some good things about it, and I do think that it looks like a good game.

And yes I also agree that I want a Chip N Dale Remastered too...

Re: Review: DuckTales: Remastered (Wii U eShop)
on August 15th 2013, 10:39 pmTasuki
@Nepgear: I wouldn't necessary say its better more like equal. The only thing that does make it better are the graphics and the voices straight out of the cartoon but of course that sort of thing was impossible to do on the NES due to limitations of the time. I am pretty sure that if this type of game was capable in 1989 than I am sure that they would have done the original like this.

@Jnes: Thank you so much! I am sure that you will enjoy this game. If you are a fan of Chip N Dale which I am guessing from your comment than you will enjoy Duck Tales.

Re: Review: DuckTales: Remastered (Wii U eShop)
on September 12th 2013, 4:53 pmShounenMania
This game is really good looking, but I'm glad that the gameplay wasn't changed it is a great game and your review is just as good.

Re: Review: DuckTales: Remastered (Wii U eShop)
on October 15th 2013, 2:38 pmAmufungal
Nice review @Tasuki I look forward to reading your next review

Re: Review: DuckTales: Remastered (Wii U eShop)
on December 4th 2013, 1:15 pmRWBY_Red
I love this game it's one of my favorite eshop games.

Re: Review: DuckTales: Remastered (Wii U eShop)
on February 1st 2014, 12:17 pmSuperVash
This game reminds me of my childhood playing NES games every day after school and sometimes with some friends during the weekends!