Tell us which game was your first in the series and explain what you thought of it and you could win a code to download Super Mario Bros. 3 for the Wii VC!

Those who post will be given a random number between 1 and 50 if the number is 30 you win, if not you could still have a chance as a new contest will start next Monday if a winner hasn't been found by Sunday at 12:00AM PST.

The first Mario game I owned was the spin-off classic, Mario Kart 64. It was awesome being able to play my own console instead of a friends', and my family and I had hours of fun playing all-cup Grand Prix races most weekend nights. We each had our favourite character; mine was Yoshi, the green dinosaur who didn't slow down too much off-road. I tended to win most races, with Dad being second-best. Poor Mum always disappeared off-course and crashed into items, obstacles and those annoying Mini Bomb Karts! Her skills have improved though, and we enjoy playing Mario Kart 64 to this day.

Sadly, my copy of Mario Kart 64, as well as my other Wii VC games, were lost after the System Transfer Fiasco of 2013, but I will redownload it another time so we can enjoy our all-cup GPs once again.

My first was Super Mario Bros on the NES.

A few months before the NES was released my Dad rented a NES from a local video store (I am not sure how the got one.  Maybe it was a deal with Nintendo to get people familiar with it before it went on sale to the public or something like that).  It was odd at first it came in this black suitcase like thing  and we hooked it up to our tv.  I was amazed when we put the Super Mario Bros/Duck Hunt cartridge in on saw the start up screen where you had to choose between SMB and DH, however nothing could prepare me for what I was about to see next.

The now familiar SMB theme started up the first time and I was in awe.  It was like watching a cartoon but I was able to control the guy.  I slowly pushed the right Dpad button and off he went.  As I ran towards the Goomba my dad told me press the A button to jump and I did just barely and my father, brother and mother all cheered.  But wait there was more???  I remember beating world 1-1 and grabbing that flagpole and it was the greatest feeling in the world.

For me that was the greatest thing I have ever seen.  At the time I couldn't really compare it to any other game cause honestly the only video game I played before that was some baseball game on my cousin's Atari years earlier.  To this day even when I play SMB whether its the original NES cartridge, the All Stars version or even the copy on the 3DS VC, I still get that same feeling I did all those years ago of completer aweness I guess you can say.  Heck if it weren't for that game I wouldn't be the gamer I am today. 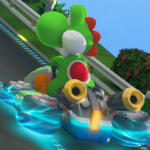 Re: Lucky Number: Celebrate Mario's 30th Birthday And Win A Super Mario Bros. 3 Wii Shop Download Code!
+
June 26th 2013, 3:11 amTheMultiYoshi
My first Mario game was Super Mario 64 DS, after playing it at a friend's house I instantly had to get a copy of the game for myself and Mario has been my favourite series ever since. I think I spent around a year exploring the whole game and in the end I finally got 150 stars.

Re: Lucky Number: Celebrate Mario's 30th Birthday And Win A Super Mario Bros. 3 Wii Shop Download Code!
+
June 26th 2013, 11:01 amKeAfan7
Congratulations @Tasuki you're the lucky winner! Let me know how you wish to receive your Wii download ticket. I'll send it either by PM or email.

Re: Lucky Number: Celebrate Mario's 30th Birthday And Win A Super Mario Bros. 3 Wii Shop Download Code!
+
June 26th 2013, 4:32 pmTasuki
Oh wow what a surprise. You can go ahead and PM me it here on the site Rukiafan. Wow I feel so lucky now maybe I should go by a Lottery ticket.

Thanks all for the congrats.

Re: Lucky Number: Celebrate Mario's 30th Birthday And Win A Super Mario Bros. 3 Wii Shop Download Code!
+
June 27th 2013, 9:15 amTasuki
Yep I did. Sorry it took me awhile but the tv was in use lol (Man what I wouldn't give for off tv play mode in Wii mode lol). As soon as this game hits the Wii U VC I will be using that to write up a review for it. Thanks again Rukiafan.