A path to the right direction for the series

Harvest Moon has been on Nintendo’s consoles since the SNES days. Back then, it introduced a new and fresh genre that had set itself apart from the mainstream games. Although it came far later in the SNES’ life, it was well received and provided hours and hours of fun. Over 15 years, Harvest Moon has always stayed true to it’s formula and hasn’t changed much at all. The series even branched out two new series, Innocent Life on PSP and Rune Factory on DS. The latter turned into it’s own series and got rid of the “A fantasy Harvest Moon”. But Harvest Moon hasn’t inherited the mechanics introduced in Rune Factory. And it doesn’t have to.

Harvest Moon A New Beginning actually changes things up a bit while retaining it’s core mechanics. Instead of living in a lively town filled with people, you are responsible for bringing the people who left Echo Town back. This however, leads to the first issue many may have with this game.

Right off the bat, the game opens up with the mayor of Echo Village, stumbling and seemingly depressed due to what has happened to his poor town. The last person to leave was an innkeeper, seeing no reason to stick around as its severely hurting his business and no one wants to stay at an empty, barren town. So, you the player happens to be walking along and help Dunhill as he collapses. And finally, Dunhill eventually tells you that your ancestors left you a farm and it’s up to you to bring it into prosperity, while also helping to bring people back to Echo Town to make it the lively place it once was. And that’s the story. But Harvest Moon has never been about it’s fantastic or lackluster story. It’s how you play, what you want to do and what your priorities are. It’s an open ended game. At least, up until now.

You’re thrown into nearly a half of in-game month tutorial, showing you the mechanics, introducing you to some the villagers who stuck around and how to make some money by gathering bugs, wood, rocks and so on in the forest north. If you’re not a patient person, then this may be a big turn off. But if you can bear with how slow the game is at first, you’ll find an addicting and rich game that really takes Harvest Moon as series forward. Another issue of the game has to be how much there is to do. Sometimes you’ll be running around town, thinking whether to fish, gather materials or explore the mines in almost half an hour of in-game time before the day ends. It all comes down to planning your days a little ahead of time and trying to make money for expanding your town. 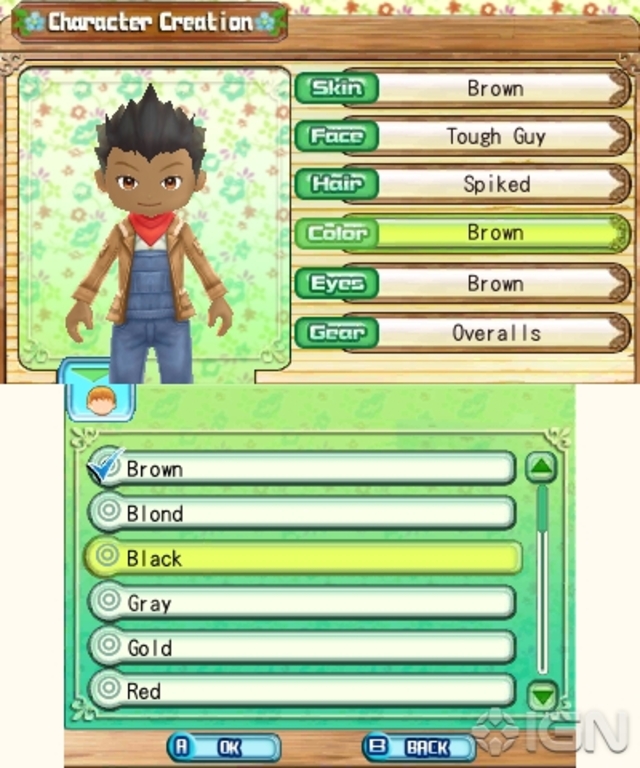 There's an emphasis on customization


When Summer hits, you’re open to more people in your town as well as being able to customize your town and farm. When in Edit Mode, you can lift homes and objects up and move them to wherever you’re able to place them. This is a totally new mechanic to the Harvest Moon series, allowing you to customize how you want the town and your farm to look. If you want Sheep statues all over the town, you can do that. If you want barrels thrown all over, go ahead. Keep in mind, however, that you have a limit in how many objects you can place. It’s not extremely restrictive, but it’s something to keep a mind when you’re going crazy arranging and adding buildings and objects around. Dunhill will give you a list of objects or buildings he’d like you to build and add in town to attract folks to Echo Village. Follow his tips, you’ll potentially bring new folks over. A great thing about this feature is that time stops. So, don’t worry about running out of time or forgetting to tend to your crops and animals. Time doesn’t stop when you’re in buildings anymore like past games however.

That is pretty much the only “new” mechanic in Harvest Moon ANB. However, customizing your town isn’t the only new mechanic introduced in this game. When starting a new game, you’re able to select your gender, skin color, hair color, eye color and hair style, something that has never been in any of the past Harvest Moon titles. As you progress in the game, a tailor will be in town and will be able to make new outfits for your character to wear.

Besides the customization, Harvest Moon has been left unchanged. Some animals from the past are available and new ones such as yaks and alpacas. A new minor feature regarding cats and dogs are being able to get fat if not properly taken care of. Otherwise, there’s not much new on the animal side. New crops include cotton and cactus. The rest are all from past games. And there’s plenty.

The way you take care of crops and animals are pretty much unchanged. You can brush your cow to keep them clean. Milk them. The standard.

In terms of bachelors and bachelorettes, both genders have six choices each. Sometimes, giving items to them will reward you with gifts in return such as the local blacksmith Iroha giving you blueprints to craft new equipment such as Copper Watering Cans and Iron Hammers. The game pushes you to build a relationship with the locals. If you don’t see them for awhile, they’ll realize that they haven’t seen you and mention it briefly. Unlike past games where characters repeat the same dialogue, Harvest Moon ANB gives the characters a little more personality and variety and you’re bound to find your favorite. 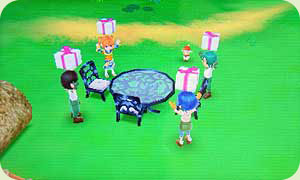 Every online session allows you to exchange gifts. Just don't be mean and share barn dirt

Online play is present but in limited form. You won’t be visiting anyone’s farms but rather interact with animals they take with them to a pasture called an "Animal Field". There, you can exchange items and even milk their cows and yaks. This can be either with friends or strangers and up to four players. There is no way to chat, just only gestures. It’s a shame, since online play in Harvest Moon is a perfect fit and this would have been a fantastic opportunity to utilize the 3DS’ capabilities. There isn’t even an option to join a friend’s room through the home menu even though it’s marked with a Nintendo Network logo. But for what it is, it kinda works. 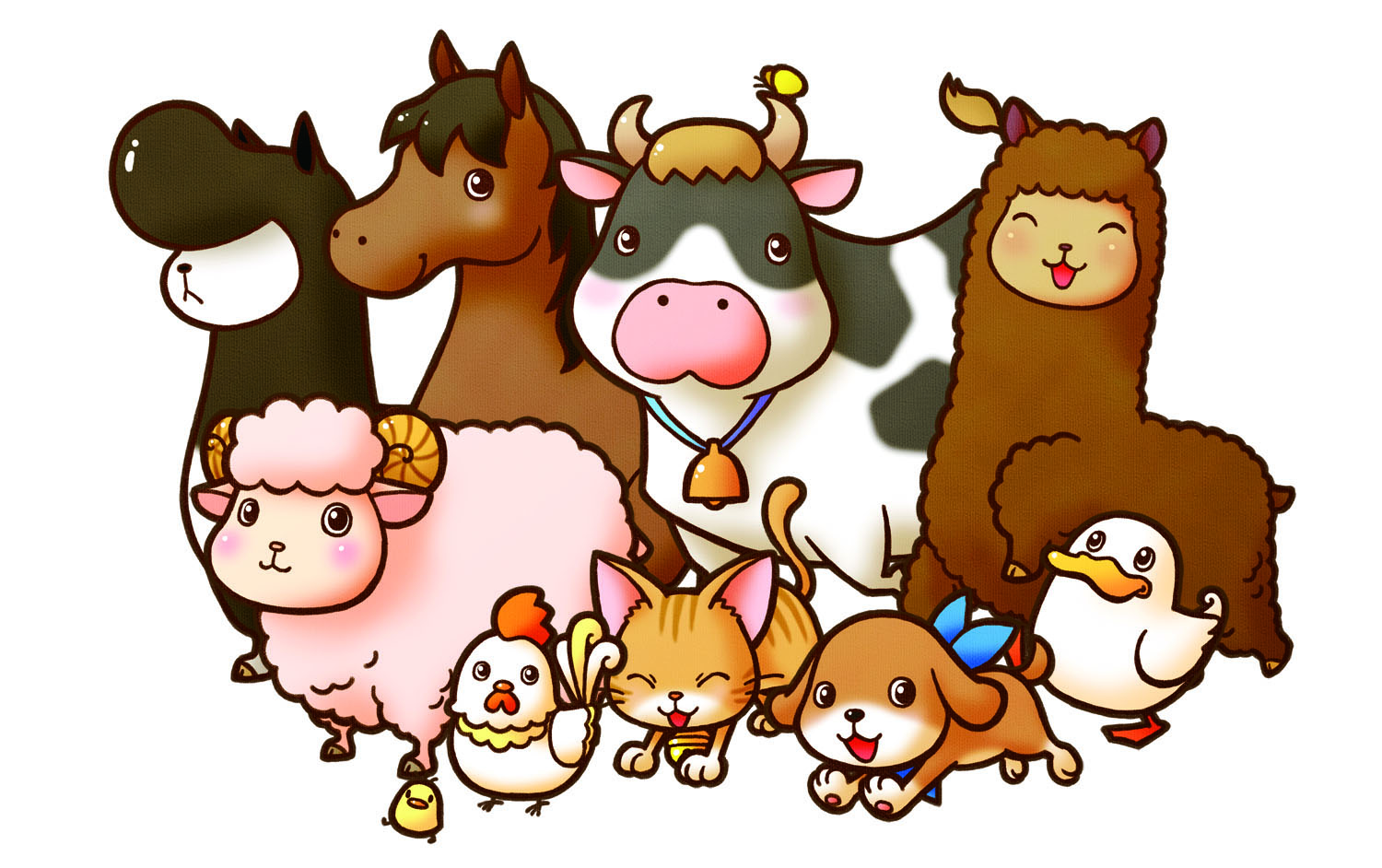 You will fall in love with your farm friends

In the end, Harvest Moon ANB is a fantastic game that should find a place in anyone’s 3DS library especially if you’re one who love simulation games. Those waiting for Animal Crossing New Leaf should check this game out to pass the time. Although it may not be as polished or exactly like Animal Crossing, it still holds it’s own and will provide hours and hours of fun. Just be sure you’re able to stomach the very slow start. Get past that, you’re in for a fantastic experience.

“Perfect for Harvest Moon and farm simulation fans. A solid addition and improvement for the series. This game isn’t for the impatient, though. But that’s part of farming, right?”

Re: Review: Harvest Moon: A New Beginning (3DS Retail)
November 21st 2012, 9:31 pmKomicturtle
Thanks. Practice makes perfect. It was hard writing up this review because there is so much to cover and specifics. It's a really fantastic game and one of my favorites on 3DS. Invested about 40 hours so far and still haven't beaten the story or reached Winter. This is a really long and fun game.

I will have to pick up this one when my finances recover from the Wii. Might look into renting it from Gamefly but if its as long as you say it is I might be better off waiting to buy this one.

Re: Review: Harvest Moon: A New Beginning (3DS Retail)
November 21st 2012, 10:35 pmKomicturtle
I've actually got this from Gamefly lol I couldn't afford it at the time. I'm looking to permanently own it next month as I too am recovering from investing in a WiiU.

And thanks for the feedback!