A Journey That Any Archeologist Would Absolutely Love! 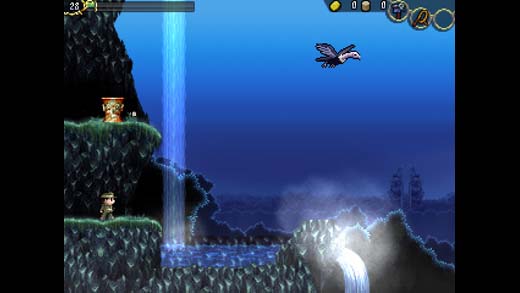 La-Mulana is a remake of a 2005 freeware pc title with vastly improved graphics and music as well as other changes. The game saw many delays and the previous publisher even cancelled the North American and European releases, luckily EnjoyUp games picked up the game and now it's finally been released outside of Japan, but is this game worth the long wait? Let's find out! 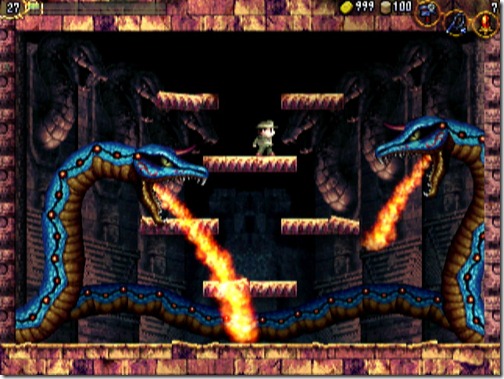 The story in La-Mulana is fairly important despite how it feels, the story and events often uncover clues to difficult puzzles so the difficulty of the game can vary depending on how well you pay attention to what's going on around you. The game is a platformer that feels alot like an Indiana Jones meets Metroid style game with tricky puzzle, platforming, and treasure hunting this game will never have you bored!

The bosses in the game can be nightmarishly difficult or very easy depending on your weapon choices so be sure to not use up all of a particular sub weapon before fighting the boss of a temple.

A word to the wise collect the item near the start of the game because without it you may need to backtrack or worse yet could end up stuck in a pit or other trap with no way out forcing you to reset the game!

A unique feature in La-Mulana is the .EXE system that grants you power-ups from .EXE files that can be found, but your cpu memory is limited so don't expect to use every good .EXE file you find at the same time.

The game is very long and can easily take more than 40 hours to beat, but can take over 80 hours for completionists to collect every item and fully explore every area in the game! 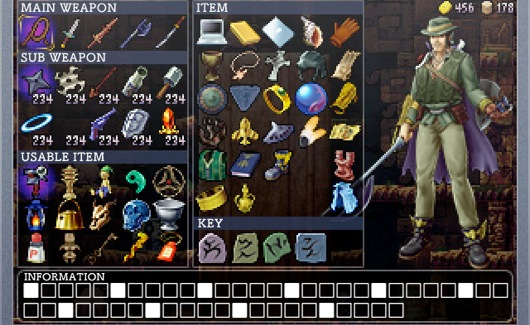 The graphics in the WiiWare remake have been drastically improved from the PC release and are easily some of the best graphics you'll see on a WiiWare game as the details are breath-taking as every single area looks not only beautiful, but also completely unique with so many background objects and enemy designs you'll wonder how Nigoro put so much detail into a game that is under 40 MB!

The soundtrack is quite possibly the most impressive feature of La-Mulana as there are easily 50+ music tracks in the game and every one of them sounds like something straight from a PS1 platformer! How Nigoro managed this I'll never know, but you won't hear better quality music on any other WiiWare game! 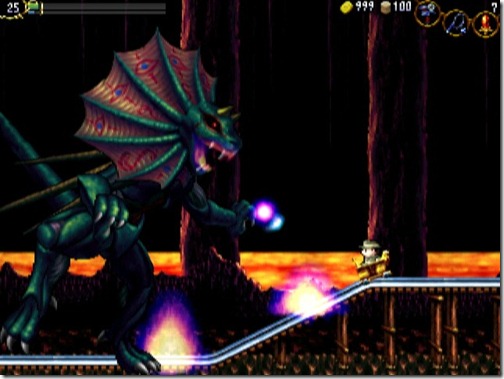 With fun, yet challenging gameplay and unrivaled graphics and music for a WiiWare game this is one game that no Nintendo/Retro gamer should pass up and at 1,000 points it's easily the cheapest WiiWare game with around 60 hours of gameplay!

This review can also be viewed here

Re: Review: La-Mulana (WiiWare)
+
September 23rd 2012, 4:08 pmKokorOtaku
Awesome, glad I picked it up, but I suck a games it seems since I have very few completed gams

Maxed out my Shuriken (150). Time to challenge that giant lizard again.
The game gets better and better. It never fails to impress.
I put 20 hours into the game so far, played this the whole weekend

I love it! I never thought it would be THAT good.
I'm excited to see what's coming up next but I played this 7 hours today and now is enough, i need a real life hot spring bath

Re: Review: La-Mulana (WiiWare)
+
September 23rd 2012, 5:23 pmKeAfan7
@SKTTR A few sleepless nights allowed me to finish the review in a competitive amount of time so our review can actually draw more people. Now for some well deserved sleep.

Re: Review: La-Mulana (WiiWare)
+
September 23rd 2012, 6:19 pmNINTENBRO
Good work Rukiafan! I must have this game at once! That inventory screen gets my mind wandering everytime I see it.


HarmoKnight, that doesn't necessarily mean you're not very skilled at playing videogames. I have more unfinished videogames than I can count on both hands, and I know I don't suck at videogames. Sometimes I think it's just because subconsciously I don't want certain videogames to ever end.

Re: Review: La-Mulana (WiiWare)
+
September 24th 2012, 4:54 pmRena Ryuugu Fanboy
This game deserves that perfect score more than any other WiiWare game out there.
Great review Rukes!

Re: Review: La-Mulana (WiiWare)
+
September 24th 2012, 6:54 pmNINTENBRO
I don't know about that ReverseInverse, because Moto Heroz was a pretty damn good game too. Also, as a WiiWare title, Max & The Magic Marker is an extremely polished game, and I love the colorful art style.

Nintenbro wrote:I don't know about that ReverseInverse, because Moto Heroz was a pretty damn good game too. Also, as a WiiWare title, Max & The Magic Marker is an extremely polished game, and I love the colorful art style.

Yeah, MotoHeroz was awesome. And so was World of Goo, Hydroventure and My Life as a King. And now La-Mulana is making my 10/10 WiiWare Top 5 complete.

As for Max & the Magic Marker, I have a different opinion on that one. It is a unique game with neat 2D graphics and good gameplay. But there are several big letdowns: It freezes regularly in the later levels when you have lots of ink and draw too complex lines. It is extremely frustrating to restart over and over again if you try to go for completion and collect all those hard to reach bubbles. There is a handful of extremely challenging stages later on. The crashing noise is awful as well. And it has various bugs: There are collectables (black paint bubbles) in each level, but it makes no sense to collect them, because I found out in one level there's one that will respawn endlessly. I managed to collect 64 out of 63 just to see if it was possible... I unlocked all cheats with this glitch. I don't think that was intentional. I beat the game, but didn't go for 100% because of the problems. The framerate got very twitchy as well. It had a good soundtrack though. But an "extremely polished" game? Unfortunately not.

Re: Review: La-Mulana (WiiWare)
+
September 24th 2012, 8:13 pmNINTENBRO
Hmmm... That's very strange SKTTR, because I haven't encountered any of those glitches/bugs you mentioned above. Maybe it's just an issue with the PAL version of Max & The Magic Marker. I do definitely agree with you about Hydroventure/Fluidity, though. I don't know why I didn't include that game in my post above.

Anyway, let's move back to La-Mulana.
I'm still stuck at the third boss - even 150 Shuriken are not enough - and now I'm not sure anymore if he really is the 3rd boss or if I skipped a few again. So, I explored more of the ruins. There's a pitch dark cave I'm in now. And I'm running out of ammo for that flare gun...

I'm a bit slow sometimes cos I recently found something out that everyone should know from the beginning: Read the save stones! Then you can warp to them!
I backtracked to every one of them so now I can warp to any location I want. Saves me the trouble of finding my way around. No more items, time, and health wasted! If I would have only known earlier I would have spared me some moments of trouble.

Re: Review: La-Mulana (WiiWare)
+
September 25th 2012, 1:58 amKeAfan7
Hey guys my review was acknowledged by EnjoyUp games on their Twitter page!

Re: Review: La-Mulana (WiiWare)
+
September 25th 2012, 1:30 pmShounenMania
Good review Rukiafan and congrats for having your review mentioned by the game's publisher!

Re: Review: La-Mulana (WiiWare)
+
September 25th 2012, 1:48 pmMs_Kinomoto
Um....my parents got me my own Wii for my birthday coming up but now I can not get any games any time soon

I wanted this game too

Re: Review: La-Mulana (WiiWare)
+
September 25th 2012, 2:48 pmNINTENBRO
Nice! I'm so glad you finally have your own Wii console now Epona! I'd try to gift you La-Mulana for your birthday, but I can't even afford to download it myself.

Re: Review: La-Mulana (WiiWare)
+
September 25th 2012, 4:30 pmOtaku
@Rukiafan you deserve a brohoof for making this review

Re: Review: La-Mulana (WiiWare)
+
September 25th 2012, 6:48 pmAqua Cherry Blossom
This review is amazing Rukiafan, you must have put alot of hard work into the review.

Re: Review: La-Mulana (WiiWare)
+
September 26th 2012, 11:51 ampizzacore
How does this game compare to the best games in the genre such as Super Metroid and Super Castlevania IV?

pizzacore wrote:How does this game compare to the best games in the genre such as Super Metroid and Super Castlevania IV?

I agree with SKTTR La-Mulana is just that good!

Re: Review: La-Mulana (WiiWare)
+
September 27th 2012, 12:53 amSKTTR
unfortunately i have to start over. activated the nasty cruel HARD MODE trap. that's why every room suddenly had new, more and stronger monsters. also, the bosses are a big problem now.
i advise you to not do the same and DO NOT READ "THAT" SIGN TWICE! or at least make a separate save file. i am a fool, like the sign told me.

Re: Review: La-Mulana (WiiWare)
+
September 27th 2012, 12:52 pmStaroceancrazy
I can't believe it, but this review has been mentioned at IGN and Kotaku now! 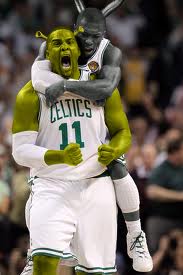 Read it up below. I messed up there and have to start again, again.

So, you now know not to read that evil sign twice, and now you know how not to mess up your game.

There are other "traps" that don't reset, but these are intended. I wrote about them on Nintendo Life, but I guess people here want to know as well. Actually there are two missables I found out that way, so made a list work-in-progress now to help other players avoiding the nasty traps, glitches, and missables.

If you don't like SPOILERS, I marked the names of the areas, so if you're not there yet, you might as well not read further.

1. When you first enter the Moon Pyramid area a few screens up and to the right, there's a big block at the ceiling. You can bring it down by solving a puzzle and open up a path to the Twin Towers. If you mess up this puzzle the block will fall down all the way so you cannot reach the ladder. Don't worry too much if you messed up this, there's a second way to enter the Twin Towers in the Lava Pit area, but it would be handy to have this shortcut as well.

2. In the Lava Pit, all the way to the left where you can fall down a whole screen between flames that spit out of the walls. There is a hidden passage to the left. It eventually leads to a miniboss, and then to another room to the left, and there is a difficult trap waiting for you. I recommend warping and saving, because if you activate the trap there is a chance you either get instantly killed, or you will miss that item forever. However, this secret item is not important to win the game.

3. BEWARE! In the Giants Coliseum there is a sign in the upper right area that tells you that you should never read it again! Because if you do, the rest of the game is turned into VERY HARD mode: You make more monsters, new monsters and harder monsters appear in almost every screen, and you have to fight much harder and faster bosses!

4. VERY IMPORTANT! In the Graveyard of Giants (an icy area) there is a room with two big ice platforms and two switches. If you press the switches in the wrong order the platform will fall down and you never get a second chance to make a bridge to the "grail point" which is very important to see the ending/final boss of the game. EDIT: Actually there is another way! So this is not a gamebreaking bug!

You cannot reset these, other than loading an earlier save or starting from scratch.