the first time you see that screen you know you going to experience pure greatness. metroid was amazing, metroid 2 was awesome but metroid 3= super metroid just blew everything up. it is definely the best super nintendo game. this is rather going to be long because its a game that just deserve to be mentioned in great depts. metroid is known like i said in the previous metroid review to be a game you play alone. it has chilling music and you are alone. if you thought metroid on nes music was chilling then just wait til you hear super nintendo. its so creepy and also its the first metroid to have a actuall story. as soon as the game begin you get to hear samus talk about her encounter with motherbrain and that she found a small larva in metroid 2 that kept following her. the story is after those game she delivered the metroid baby to the ceres station for analysing. however she barely manage to get far away until she gets a distress signal that ceres station was under attack. so she flies there only to find the metroid stolen by ridley. so there is your plot. a fantastic plot. this game is huge and it is by far the greatest game in the serie. i simply love this game and i can even today sit and play that game for hours. it has a strong power to suck you in. the music is so amazing, the graphic is freaking f ing awesome. even if you dont like it you cant deny that this game is godlike. this is my review

1. start up/intro
well i kinda said the intro and plot already. the story is very deep and it gives you a reason to play it. this story is so deep it holds up to a link to the past and final fantasy 6 level. those two game story was a bomb just like this

2. gameplay
the gameplay is just the same as metroid(nes) and metroid 2. 2d shooting game. like metroid you have to find map rooms, items, weapons, save room and do puzzle solving. however the game is way improved because its way more easier to find your way, it explains how to use weapons and items when you get them and you can move more smoother. its hard to explain but put on metroid nes then pop in super metroid and you might understand what i try to explain. the enemies are just awesome like usual and there are more bosses. the levels desing is just fantastic. its creepy and its very metroid style like. its keeps metroid the way it should be if not even better. not to mention this graphic is one of the best snes has created. it feels like a movie. it feels like you playing a movie. the game does not have any cutscene. only in the beginning and at the end but its ok because this game is still fenominal. the levels in this game has more varity like a djungel kinda level, hi tech room, lava room, darkroom. man its just damn. you just have to pick up the controller and play this game now. its not hard to find and you can download it on the virtual console. so there are no excuse to not playing it

3. music
music plays a big roll in this game because it makes you feel the environment of the game. the creator of this soundtrack i love you. the songs in this game is so stinking great that they as today keep using it in the newer game. this is absolutly on of the best soundtrack in super nintendo's library

4. graphic
like i said this is by far one of the greatest graphic super nintendo has to offer. its creepy, dark and its just increadible. you feel like you playing a movie. the design team you deserve a medal for pure awesomeness

5. fun factor
this game blows you away. you cant hate this game. you having so much fun. i said it back then and i say it now super metroid is a beast. go and play it. this game is super nintendo's best game. as i said you can download it on virtual console. so what are you waiting on. go and do it

6. difficulty
this is hard to rank because its a mixed opinion. so i think i give this a 4/10 not to hard but it can be challenging against bosses

total score: i give this an absolute 10/10 the perfect game on super nintendo. this is a game you must get. no nintendo collection is complete without this game and i speak for all gamers when i say that this game should become a movie. its that great

here is some pics and the entire soundtrack 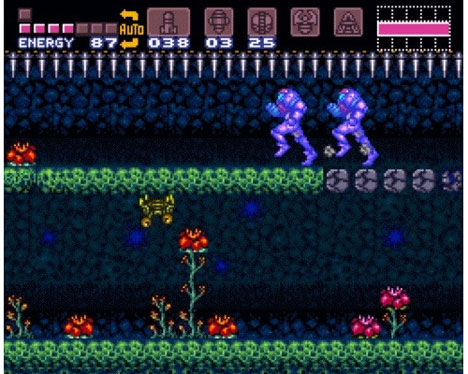 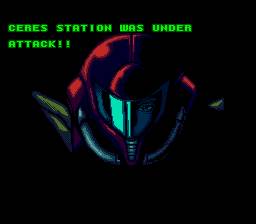 random talk:
ok by now you must realise how big this game is. in fact its so big that even castlevania copy its gamestyle. no joke. just take a look on castlevania symphony of the night. its the exact same style as metroid. super metroid is a great wonder and i think it should be made into a movie. just take a look on prince of persia. they made that to a movie and it is actually good. just imagine to see super metroid on a big screen. now that is just awesomegasm. if nintendo ever decides on making that as a movie then i will personally get a boner and i will simply be the happiest guy on earth. the concept is there. its a 3d age so metroid could be the greatest idea EVAR. hell they made doom so why not make this a movie too. it must be made

this is silks of sweden review. i hope you liked it. stay tuned for more

Re: super metroid
on September 4th 2012, 9:56 amNINTENBRO
Awesome review silks! Super Metroid truly is one of the greatest SNES titles in existence, if not the greatest. The Legend of Zelda and Metroid are my two favorite Nintendo franchises, and there's good reason why.

Re: super metroid
on September 4th 2012, 9:58 amsilksofsweden
yeah i totally agree and thats why they should make it a movie

Re: super metroid
on September 4th 2012, 11:17 amNINTENBRO
Metroid does seem like a very acceptable title for a science-fiction movie. I mean, it couldn't do any worse than Super Mario Bros. did. I don't see Nintendo investing in such a big budget movie like that themselves, but some film company could become interested someday.

Re: super metroid
on September 4th 2012, 12:10 pmsilksofsweden
dude let me just tell you one thing. dont you ever dare to mention super mario bros the movie to me ever again. its a disgrace and its unforgivenble

silks wrote:dude let me just tell you one thing. dont you ever dare to mention super mario bros the movie to me ever again. its a disgrace and its unforgivenble

Hey! I thought Super Mario Bros. was one cool a$$ movie, when I first watched it as a 10 year old child. Oh yeah, innocence is a bliss.

Re: super metroid
on September 6th 2012, 3:54 pmsilksofsweden
that was not the real super mario bros movie

Re: super metroid
on September 6th 2012, 4:13 pmNINTENBRO
I'm referring to the Super Mario Bros. movie which starred John Leguizamo, Bob Hoskins and Dennis Hopper. I guess I was actually 11 years of age, at the time.

Re: super metroid
on September 6th 2012, 4:21 pmsilksofsweden
Can we skip the super Mario movie. It has nothing to do about super meetrois

Re: super metroid
on September 7th 2012, 9:21 pmSKTTR
hahah funny review but you're spot on. this is definately a 10/10 not just for the killer milestone it was back in 1994, but also for the immersiveness and atmosphere, the music and the overall game/world design that are simply worth to be experienced by anyone who is into actionplatformers/actionadventures.

@SKTTR wrote:hahah funny review but you're spot on. this is definately a 10/10 not just for the killer milestone it was back in 1994, but also for the immersiveness and atmosphere, the music and the overall game/world design that are simply worth to be experienced by anyone who is into actionplatformers/actionadventures.