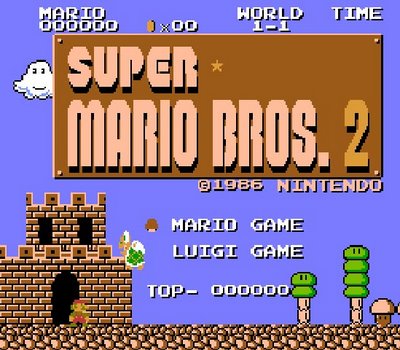 this is the real super mario bros
silks: hadouken

1. start up
the start up is just like super mario bros exept it says super mario bros 2 and you can chooce if you wanna be mario or luigi. mario is the faster char while luigi jumps higher. nothing much to say

2. gameplay
the gameplay is the same as super mario bros 2. if you never and i mean NEVER PLAYED SUPER MARIO BROS THEN YOU ARE A DISGRACE LITTERLY. the only diffrence is its super mega hard. also you have the possibility to die the most pathetic death ever since letting the time run out. THE EVIL POISON MUSHROOM DUH DUH DUH DUH. i will never forgive you evil poison mushroom. you have tricked me, been in places and chased me to die so many times. not only do you have a evil poison mushroom after you constantly but you also have to be careful when you warp. if you dont take cautions when you warp you could warp yourself backwards. in other words you go back few worlds. when i tell you this game is hard i mean its metallica hard. some of the jumps are ridiculous, the enemies are bullying you, time runs out to quick, there are wind that blows you in wrong direction and a fu.k hole lot of other things. its cruel. this is a masochist game. i spended like 6 hours trying to beat it. im dead serious

3. graphic
the graphic is just the same. its classic and its original. the evil poison mushroom could have a diffrent color so you dont get tricked

4. music
do i really need to say anything about it. i think you know how it is just like me

5. fun factor
well its fun but its so freaking hard. its hard, frustrating and annoying but its fun. i dont recomend this for those with short fuse because they will go insane and have a huge rage

6. difficulty
this is the absolute hardest super mario game i ever played. its no wonder why it was never released in usa until later. i give this a 8/10 really hard

final score: i will give this a 4/10 because its too difficult and also its not worthy of being a sequal to the classic. how can you call a sequal when the game is almost the same as the original? like i said this game is for masochist gamers and for those who wanna torture yourself

here is some pics 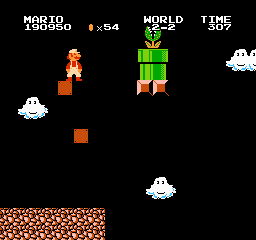 Re: Super Mario Bros 2: The Lost Levels Review
on August 30th 2012, 12:02 pmTowafan7
I agree. Super Mario Bros. 2 USA on the other hand is a great Mario game, even though it technically isn't even a Mario game at all.

Re: Super Mario Bros 2: The Lost Levels Review
on August 30th 2012, 12:04 pmsilksofsweden
yeah its way better and i actually like it

Re: Super Mario Bros 2: The Lost Levels Review
on August 30th 2012, 1:04 pmMetalShyGuy
The game might be too hard, but it still isn't unbeatable and deserves at least a 6 imo, but this is Your review and not mine so I respect your opinion. Even though I disagree with your score I think your review is very nicely written.

1. the game is almost the same as its original
2. the game is incredible hard and it is frustrating
3. not many people have actually played it. only the snes version
4. it is less populare than super mario bros 2 aka doki doki panic version

2 points off there for difficulty and for not being played by many. do i need to say anymore why i only gave 4?

Re: Super Mario Bros 2: The Lost Levels Review
on August 30th 2012, 2:59 pmKokorOtaku
I liked this game a lot and now that I'm better at games, I might try to beat it, I like a challenge

I right there with you Silks the fact that it was to similar to the first game and the huge difficulty spike from the first game was a deal breaker for me when it came to this game. I have tried several times to beat it but I just get annoyed and bored after a few minutes of this game.

Re: Super Mario Bros 2: The Lost Levels Review
on August 31st 2012, 4:10 amsilksofsweden
thx. im just being fair and telling the truth. i try to be as professional as posible when i review games which many people take for granted. not to mention i do not just play games to just review. i analysing games, checking up its value, playing it so i can experience it my self and i check up others conversation and notes they made about those game. so its more than there is to it when i review that people take for granted. i just wanted to let you know because you seems to like my reviews and its fun to share diffrent opinions. so i just wanted to thank you for showing support to me. you are the main reason why i get such urge and energy to make reviews. i hope you still keep showing support

Re: Super Mario Bros 2: The Lost Levels Review
on August 31st 2012, 2:59 pmNINTENBRO
I don't know about everyone else, but I thought this was a very proper sequel to Super Mario Bros. silks, you deserve every bit of accreditation you receive. I can tell you take much pride in the pleasure of others, and that's a very honorable trait.

Re: Super Mario Bros 2: The Lost Levels Review
on August 31st 2012, 10:18 pmsilksofsweden
thx nintenbro. its certanly a honor to make review for you guys.. and girls

Re: Super Mario Bros 2: The Lost Levels Review
Sponsored content
Permissions in this forum:
You cannot reply to topics in this forum