i was sitting in my room playing super mario when my cousin visited me and asked me if i wanted to play metroid. when i heard the name i suddenly started to get images of space, laser, planets and aliens in my mind. we put the game in and boom. it just blew my freaking balls off. it had so sweet music and the graphic was just awesome. sound effects were the best i heard in a videogame. from the beginning metroid became my favorite game along with super mario, legend of zelda , contra and some more. not only was it fun but it was quite hard. it was easy to get lost and there was so many items and weapons that you did not know what it did. it was a game i simply loved because i was a guy who loved solving cryptic stuff and confusing stuff so it was a real treat. but the real shocker was when i beated the game. yes you actually played a girl all the time. a sexy, brunette, red underwearing metroid bounty hunting babe... mmm yeah that was hot. once i learned you could play as a chick all the time by putting in the code JUSTIN BAILEY that was a real awesome slice

1. intro/opening
if you watch the intro it only tells you what to do. it has no real plot, they dont tell you why you are ordered to hunt the metroid but we get the point

2. gameplay
the gameplay is a typical 2d shoter, action game. the enemies is both hard and easy. it depends what weapon you have. you have to find weapons, items, energy capsules and finding your way to mother brain. you have to do little puzzle solving to a bit when it comes to finding the right path. its really simple but like i said some weapon looks the same and is quite hard to know what they do. once you know how to do then its just play like a god. hunt those metroid down

3. graphic
like i said the graphic is so awesome. for a 8 bit graphic metroid is freaking awesome. compared to the others 8 bit games that lack creativity metroid had every right to brag and be proud over this game. futhermore the metroid looks really cool and kinda creepy. not to mention moder brain... ugh. good job nintendo

4. music
the music is a classic and has really cool soundtrack. some songs is chilly and spooking. you feel very alone when you hear the music. its like you are in the haunted space alone. the makers of this soundtrack deserves a great thanks. its also great that they keep using the same songs in the future metroid game. its what makes metroid a great serie

5. fun factor
fun is all you have. you can play for hour, finding something new, tricks and even glitches. this is must definely a must get game and it stand as a memorible game in the nes history. this game is awesome, get it

6. difficulty
this game is difficult and also you get lost easily. maybe its just me but i find this hard. however i cant say its hard nowadays because we have internet now, walkthroughs, guides, speed runs and people talk about it as we speak but before all that the only help you had was nintendo power. so back then it was hard. i give this a 4/10 because its not so hard to look up a map of this game. the only hard is some of the enemies and that is not much

final score: im going to be fair for once. the game is a classic, its fun, somewhat hard and memorible but its not perfect. i give this 8/10 i totally recomend this and its worth it so go and get it. the reason why its just a 8 is because its great game but there are a greater metroid game which im going to do a review on

here is some screenshots and songs 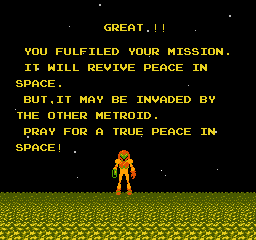 this is silks of sweden. i hope you like me review and i hope you like it kushina. next time i was thinking of doing ##### metroid so stay tuned for more. with that lets hunt some metroid

Re: metroid
on August 30th 2012, 12:13 pmsilksofsweden
yeah im on a roll now. prepare to see even more reviews from me. whaa whaaa hahaha

Edit: silks, you can very easily locate maps for Metroid at GameFAQS.com. I also plan to print out a map for Metroid II: Return of Samus. You may wish to keep that in mind for your next review my friend.

Re: metroid
on August 31st 2012, 10:17 pmsilksofsweden
i know i can download a map but back then i couldnt. today metroid is as easy as it can gets but back then it was hard

Re: metroid
on September 14th 2012, 11:54 amGrumblevolcano
Your review is a genuine masterpiece, just like the game!

Re: metroid
on September 14th 2012, 12:26 pmsilksofsweden
thx. if you like this review then check the super metroid review i made

Re: metroid
on September 15th 2012, 4:33 pmNINTENBRO
I could never understand why so many gamers classified Metroid as having a higher than average level of difficulty. I'll admit that it can be slightly difficult at the beginning of the game, but it becomes increasingly less difficult as you obtain power ups and and extend your life bar. Anyways, this has to be to most elaborately designed NES game ever produced.