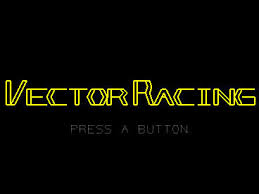 In Grand Prix, you start out selecting one of the three difficulties (Novice for low speed setting to Expert for highest speed setting) and one of the three cups with four tracks each before selecting OK. There are six polygonal vehicles to choose from with different stats, however, Max Speed is the only importance. Hold the B button to accelerate while the Circle Pad is use to steer, and as soon as the race starts press the B button for an early boost. Every track contains Accelerators (two arrows pointing up) that will increase your Max Speed for a short time, driving through another boost panel immediately after the other increases even more. Unfortunately, that’s all it takes to win the Grand Prix, the five other computer racers don’t stand a chance once going through multiple Accelerators even on Expert. They are a threat only after the starting gate, bombard by them and then hit the wall will drain your meter, which your vehicle self-destructs when empty costing you seconds in the race. It is worth completing each cup on every difficulty to unlock three vehicles that are more interesting and an additional cup, which disappointingly contains one new track and recycles three previous ones.

Single Race is where you choose any track in any difficulty racing against five other computer racers. Time Trial is where you choose any track in any difficulty against the clock, which admittedly is the exact foe in both Grand Prix and Single Race. Grand Prix doesn’t even keep track the game’s history of you actually completed the cups in first place nor reveals that you just unlocked a new vehicle. All three modes save the best time and best lap for the online rankings in Records. This is where the challenge comes into play; it’s surprisingly difficult to place in the top 100th in any track. While most Accelerators are easy to get, getting the best time trials requires going through every Accelerator on the track. It takes perfect maneuvering to get both Accelerators that are so distantly close and split on opposite sides of each other without hitting the wall, which lowers your increase speed. The online leader board will keep you coming back.

The last mode is VS Battle. This multiplayer mode could have been fun, multiple players trying to go through the same Accelerator with more self-destructing activities on the track. Unfortunately, it’s local play up to 2 players. The tracks are very wide, how can 2 players (alone on the track) race be fun?

The inspiration of vector graphics from the retro arcade machines is surprisingly effective on the 3D screen. While the layout of the tracks aren’t clever in terms of gameplay, viewing a partial second haft track layout of an upcoming bright curve from a driving perspective, surrounding nothing but darkness, are eventful stereoscopic moments throughout the experience. I’m very encourage for more retro vector graphics on the 3DS (Star Wars the arcade game please). The whole game features an arcade music track that repeats no matter what track you’re on.

Vector Racing is a type of title on the 3DS that is a victim of ghosting, due to the bright movements in black background. Luckily, there is one color choice on the option menu (also access when pressing Start during a race) that turns all the vectors into a singular color without lowering the brightness from the home screen or sliding down the Depth Slider. That color is red, transforming Vector Racing into a new entry to the Virtual Boy collection.

Vector Racing demonstrates that vector graphics can be acceptable in stereoscopic 3D. Unfortunately, the racing experience itself is a disguise. The only obstacle is missing the Accelerators. There is no reward in completing the Grind Prix 100%, 1st place on every cup on every difficulty. While mildly entertaining at the highest speed, Vector Racing is over price just for online leader board.

Re: Vector Racing review
on August 28th 2012, 8:24 pmNINTENBRO
I didn't think this racer appeared very promising, from the beginning. I figured it was just a cheap racer utilizing a visual gimmick, so it would sell more successfully. It appears the eShop isn't anymore immuned to shovelware than the WiiShop. Which is kind of sad really.

Re: Vector Racing review
on August 28th 2012, 9:33 pmKomicturtle
For shame.. Was close to buying. I'll hold off then. Maybe when it goes on sale.

Re: Vector Racing review
on August 29th 2012, 11:57 amGuest
I'm disappointed by the state of the eshop.
First we don't get any new Virtual Console games for a month and now we are starting to see a surge in eshop shovelware.

I don't mind the slow releases, but if Nintendo plans to spread releases out they really need to improve their quality control.

Too bad the game is not as nice as the review