# of players: 1, download play up to 4
Genre: Rail Shooter


Out of all the games to experience on the Nintendo 3DS, Star Fox 64 3D is the most uncomfortable. The reason is that the controls scheme on the 3DS is the same fashion as the console version. Using both shoulder buttons, all four face buttons and the Circle Pad delivers immediately cramping hands to some. With the recent release of the Nintendo 3DS XL, the system revokes the personal issues and brings a new welcome portable home to the Star Fox team.

Main Game is the classic single-player story mode from the N64 original with branching paths and achieving medals. A new edition to the story mode is that there are three types of difficulty. Nintendo 64 mode is the normal difficulty from the original and achieving all the medals will unlock expert mode, the same way as the original. Nintendo 3DS mode is an exclusive mode; it will only add challenge when gyro control is enable as an optional method to control the Arwing. While the 3DS XL does make viewing the stereoscopic 3D easier even when using gyro control, your gaming palms are still position the same way as when not using the gyro control, which makes the optional method pointless. A big gaming improvement over the original is the auto-savings between missions.

Battle Mode is a multiplayer dogfight. Using download play (no online makes Slippy cry), one cartridge owner can set a gaming session up to four players who also owns a 3DS system. The Arwings act a little differently in this mode. The Arwings are more aggressive at descending and ascending. The Arwings can no longer constantly use barrel rolls, using too often will leave your Arwing vulnerable for a short time. The main issue with Battle mode is that it’s only dogfighting, unfortunately, competing on destroying the most enemy fighters is absent from the N64 multiplayer mode.

Lastly, Score Attack is choosing any mission you previous beaten with a more challenging high scoring methods. Receiving silver medals is actually the same feat as receiving a medal on one of the missions in the Main Game. Receiving gold medals in Score Attack requires correct usage of homing blast and Smart Bombs on specific enemies and key moments. Another welcoming challenge is the fact that the Arwing is equip with the single laser and three smart bombs on every start of the mission. For those who found the Main Game too easy, especially on Expert, Score Attack is definitely a more rewarding experience. 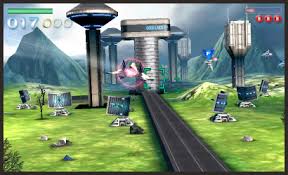 First off let’s focus on the improvements from the N64 classic that are already noticeable on the Nintendo 3DS. Star Fox 64 3D looks gorgeous with revamp graphics with a more admiration of galactic backgrounds.  The improvements of cinematic soundtrack and voice over are topnotch.

Unfortunately, there is a little frame rate issue when there is an explosion that rarely appear between you and the Arwing in stereoscopic 3D. 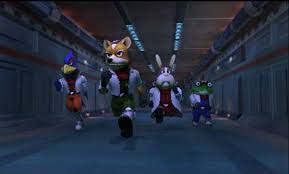 Thanks to the Nintendo 3DS XL, Star Fox 64 3D is the best version for both N64 veterans and newcomers. The bigger screens presents a riveting scope of the Lylat Wars as well has increase in stereoscopic satisfaction.

8.6 / 10 XL points (the score does not reflect on the original 3DS experience) 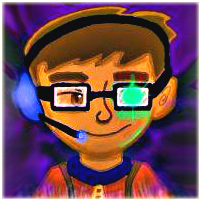 Re: Review: Star Fox 64 3D (3DS Retail)
on August 24th 2012, 11:11 amTowafan7
There is going to be additional paid DLC for the Japanese (Wii VC) version of this game that will add some of the new content from Starfox 64 3D to the game, but given the current state of the service in the west I would doubt that this paid DLC will become available outside Japan.

Anyways this review is as good as usual SkywardL.

We'll be counting on you and GamerZack while Jnes5 is gone and Chrono Cross is dealing with personal issues.

Rukiafan wrote:We'll be counting on you and GamerZack while Jnes5 is gone and Chrono Cross is dealing with personal issues.

I'll get to work on the Pokemon HS review early this week. It should be ready by the middle of the week, since I should clock up more game time on it...if I could just pull myself away from Kid Icarus: Uprising and NSMB2 for just five minutes!

Re: Review: Star Fox 64 3D (3DS Retail)
on August 25th 2012, 3:34 pmNINTENBRO
I currently have no plans to purchase a 3DSXL, but I wouldn't mind owning this game. I've encountered no complications while playing Kid Icarus: Uprising on the original 3DS model, so I'm not going to allow other people's hand cramp's to detour me from purchasing a copy of Star Fox 64 3D. I'm not sure if I'll be taking SkywardL's review score's into consideration anymore, since the original 3DS model is inferior. I'll just read through the reviews and try to formulate my own honest opinion. Great review, though. I just think you should probably include two separate review scores for each model, instead of forcing readers to compare and contrast for themselves.

Re: Review: Star Fox 64 3D (3DS Retail)
on September 11th 2012, 4:29 pmTasuki
Well I recently rented this game from GameFly and I have to say I am enjoying it just one thing anyone know if there is a cockpit view mode? Its hard for me to see what I shooting at with my ship in the way all the time.